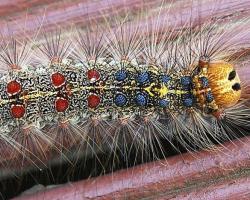 The gypsy moth caterpillar’s hairs are typically not an issue for most individuals. Tawny Simisky, entomologist at the University of Massachusetts Amherst Extension, comments. She said, "For the majority of the population, gypsy moth caterpillars do not cause allergic reactions. This can be dependent upon an individual’s amount and duration of exposure, as well as their own sensitivities.

Since gypsy moths have been in Massachusetts (1868 or 1869), the majority of the public did not experience a rash associated with the gypsy moth caterpillars. In the early 1980’s, when the last large outbreak of gypsy moth occurred, some reports were made of the public experiencing dermatitis in New England. Studies that followed that time-frame indicate that at most, in areas where gypsy moth populations were highest, only 10% of study participants report such reactions. Tawny Simisky, entomologist at the University of Massachusetts Amherst Extension, comments on the 2017 gypsy moth population in Massachusetts and how a fungus and more normal rainfall amounts could impact the caterpillars." A recent article appeared in Cape Cod Times about a few people who did develop a rash.