Hero of the Bogs Retires 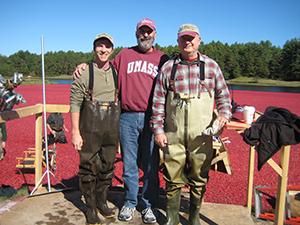 For the last thirty years or so, Frank Caruso has been the “go-to” guy for disease problems with the plants in your bogs, if you are one of those who farm the state berry of the Commonwealth. Last week, Dr. Caruso retired as Plant Pathologist with the UMass Cranberry Station in East Wareham. As late as his final days on the job, he was out in the bogs, looking at new mysterious problems that have arisen. As a cranberry pathologist and in-the-field disease diagnostician, Frank was acknowledged nationally as a leader in the business of growing the tart red berries. In fact, in honor of Frank, on his retirement, this year’s biannual North American Cranberry Research and Extension Workers Conference in Quebec, will feature “The Frank Caruso Session” with sections named “Plant Pathogens I Have Known,”  “Why do Plant Pathologists Matter?” and “Finding a Plant Pathologist With Big Feet...” During Frank’s final few weeks, he made a different sort of discovery (or a rediscovery) that brought a few light moments to his Cranberry Station colleagues but also reinforced the sense of Caruso’s importance to his field. As Frank was cleaning out his office, he discovered a cache of VHS tapes from 1987 containing a compilation of news stories from all the major Boston TV stations, all featuring Frank himself, about a root rot disease, Phytophthora cinnamomi then recently shown to be threatening the cranberry crops of Massachusetts and New Jersey. Frank had been one of the first to discover, diagnose, and understand possible solutions for the potentially devastating condition. It was a major breakthrough in the cultivation of this important crop and was recognized as such by the broadcast media. (And the VHS tapes also provided an opportunity for his colleagues to see Frank and other cranberry industry figures of the time in their younger selves… and of course those younger staff members got to see what a VHS tape was, anyway). And of course, no one will soon forget Frank and his friends-in-the-bog from Ocean Spray (pictured here)… Caruso and his wife Barbara are on the way to Seattle, where they will resettle near their two children and beloved grandson Logan.