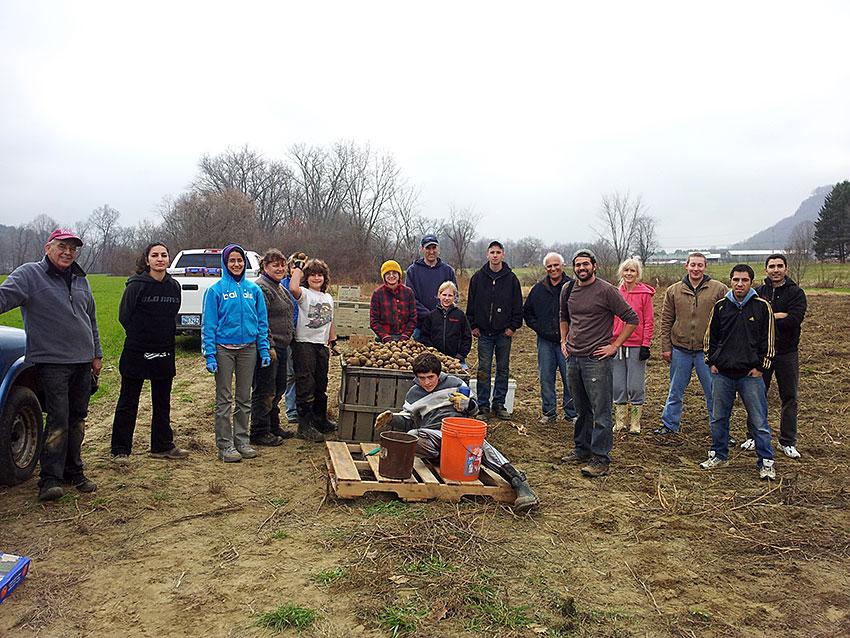 Thanks to the work of UMass researchers, 4-H members, volunteers, and the Food Bank of Western Massachusetts, hundreds of hungry families in western Mass. are receiving locally grown potatoes in time for their holiday meals. On November 12, over twenty volunteers ranging in age from young children to 70-something-year-olds harvested almost 6,000 pounds of potatoes from a field at the University’s 358-acre Crops Research and Education Farm in South Deerfield. The potatoes were leftover from a doctoral student’s research project. Without the collaboration between UMass, 4-H, and the Food Bank, the potatoes would have rotted in the field. After the potatoes were transported to the Food Bank’s warehouse in Hatfield, a group of Food Bank volunteers sorted, weighed, and packed them in preparation for distribution to agencies who provide food to those in need. Within a week of being harvested, the potatoes were delivered to agencies serving families throughout the region.

The potato harvest collaboration was initiated by Stephen Herbert, Associate Dean of the UMass College of Natural Sciences. Herbert knew about the research project and realized there would be many perfectly good potatoes that could go to waste. Herbert contacted Andrew Morehouse, Executive Director of the Food Bank, to ask if the Food Bank could use the potatoes. Morehouse realized the potatoes would be appreciated by the agencies served by the Food Bank, but consulted with his staff to make sure they had the volunteers to process the potatoes. After the Food Bank staff decided they could accept the potatoes, Morehouse contacted Herbert who started spreading the word to find volunteers to harvest the potatoes. He reached out to colleagues at the University’s Center for Agriculture, including staff who work with 4-H groups.

The potatoes were grown by UMass Plant Nutrition doctoral student Emad Jahanzad for his dissertation research on the effect of different cover crops and nitrogen levels on the nutrient density of potatoes. Jahanzad grew ¾ of an acre of white and red potatoes with different sections of the field receiving different cover crops and nitrogen amendments. Because Jahanzad had to grow a large field of potatoes to allow for space between the different experimental treatments, he ended up with far more potatoes than he needed for his research.

Jahanzad was one of many people from UMass who participated in the November 12th potato harvest. Joining Jahanzad at the potato harvest were others from UMass, including Herbert, Extension Educator Carrie Chickering-Sears who works with the 4-H Youth program, and Professor Masoud Hashemi of the Stockbridge School of Agriculture and a member of Jahanzad’s doctoral committee. Kyle Bostrom, Manager of the UMass South Deerfield Farm, used a tractor with a special implement that lifted the potatoes out of the ground, making it easier for the volunteers to gather the potatoes.

The volunteers from UMass worked alongside many 4-H youth and their families. Matt Fletcher from Southampton, a 17-year-old member of the Hampshire County 4-H Cattle Club, was there gathering potatoes and hauling boxes of potatoes out of the field. Fletcher said, “I’ve never done anything like this before. I’m here because the 4-H leaders asked us to help and also to complete some of the 30 hours of community service I need before I graduate from Hampshire Regional High School. This is a good way to get outside and help. I’d rather do community service outdoors than indoors.” Fletcher recently returned from Louisville, Kentucky where he was part of the Massachusetts 4-H teams competing in Dairy Judging and Dairy Quiz Bowl at the Invitational Youth Dairy Cattle Judging Contest at the North American International Livestock Exposition (NAILE). Catherine Bezio, a 9-year-old member of the Bernardston Trailblazers 4-H group, worked alongside her father, Bob Bezio. Catherine’s 4-H leader had sent out an email message asking for volunteers to help with the potato harvest.

Justin Costa, Food Bank Food Sourcing Coordinator, and Sabra Billings, Food Bank Director of Food Operations, coordinated the harvest and arranged for transport of the potatoes to the Food Bank. Costa commented on the importance of the event saying, “There’s a need in our region and communities. It’s a silent need, you don’t see hunger in people’s faces. The Food Bank works hard to get healthy, nutritious food to people in need. Gleaning events like this are a perfect way to bridge the gap between food that would have been plowed in and hungry people. The timing of this harvest is especially wonderful as it means many families will have mashed potatoes for their holiday meals.”\

While Jahanzad is still analyzing the data from his potato experiment, he is thrilled by one unexpected result of his study, that the potatoes he grew could be put to such good use.

For information about the Food Bank of Western Massachusetts