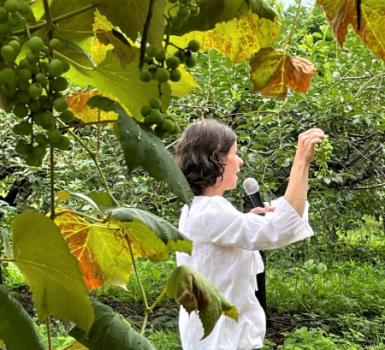 The Massachusetts Fruit Growers Association (MFGA) held its annual summer meeting on July 14 at Clarkdale Fruit Farm, Deerfield. Several extension fruit educators from the University of Massachusetts were on hand to share research on issues ranging from insects and Integrated Pest Management (IPM) to seasonal diseases that affect growers across the Commonwealth. Over 100 orchardists from Hawley and Malden to Sterling and Charleton came to hear how to grow and market healthier fruit, what techniques to use against new invasive species, and which traps are most effective against orchard pests.

UMass researchers were on hand to answer questions and engage in informal conversations. Clarkdale Fruit Farm, primarily a retail operation, also provides researchers with  fruit trees within the orchard to conduct research experiments. Grapes, apples, and pears are are among fruits grown and studied at this site.

Extension educator Elizabeth Garofalo discussed research she is performing on pear psylla. She handed out lenses for scouting these pests and discussed IPM management techniques including use of dormant oil to decrease feeding sites.

Hilary Sandler, director of the UMass Cranberry Station and an expert in IPM techniques, shared factors that influence the dynamics of crop and weed ecology within the cranberry production system.  Sandler also discussed development and implementation of nonchemical pest management, especially weeds. 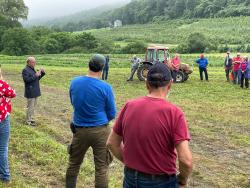 U.S. Congressman Jim McGovern noted that the climate is changing and is in crisis. He said, “We are the wind at your back on that issue.”  A member of the U.S. house committee on agriculture, McGovern is a strong national voice for agriculture and nutrition. He voiced support for growers across the state acknowledging that their hard work produces something really important at the end of the day: healthful nutritious food.  McGovern also expressed his gratitude to farmers for their advocacy on conservation.

Massachusetts Representative Natalie Blais offered an important connection between what is grown locally and history.  Clarkdale is one of a handful of farms that still grow Roxbury Russet apples, first discovered and named in the mid-17th century in the Roxbury, Mass. It is believed to be the oldest apple cultivar bred in the United States. Liz Miranda, state  representative from Roxbury, was given a gift of Roxbury Russets by Blais, which resulted in a visit by Miranda to Clarkdale Farm to learn more about heritage apples.

John Lebeaux, Massachusetts Agricultural Commissioner, reflected on the enormous challenges growers faced throughout 2020, stating it is a time to reflect on where we have been and where we are going. Lebeaux addressed the audience saying, “Massachusetts conducted itself well and distinguished itself throughout the pandemic.”

Clarkdale Fruit Farm, a fourth-generation enterprise, was begun in 1915 at the site of a former dairy farm.  Today, it grows a wide variety of fruits including over 40 varieties of apples, cherries, peaches, plums, pears and grapes. Cider is pressed in the fall using their apples.  Continuing a strong legacy of agricultural leadership, Ben Clark, president and owner of Clarkdale, also serves as current president of MFGA.  His father, grandfather and great-grandfather were all elected to the MFGA Board of Directors during their lives.

The mission of MFGA is to encourage the growing and marketing of fruits adapted to this climate. Those gathered for this annual meeting would agree: mission accomplished. 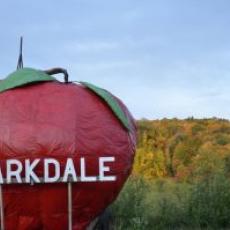 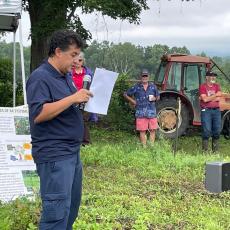 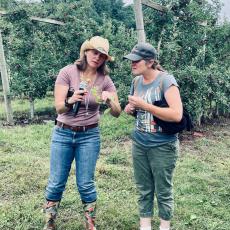 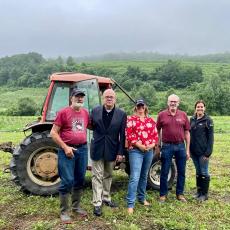 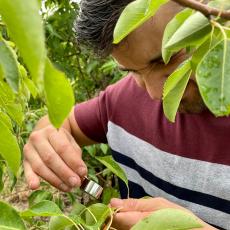 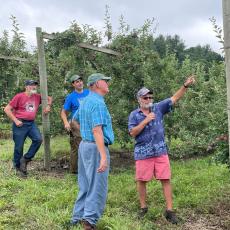 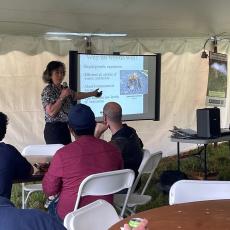 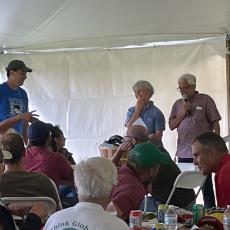 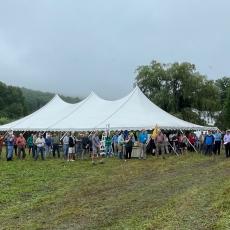 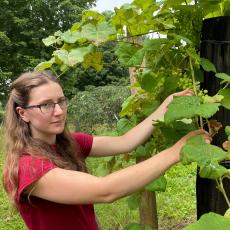