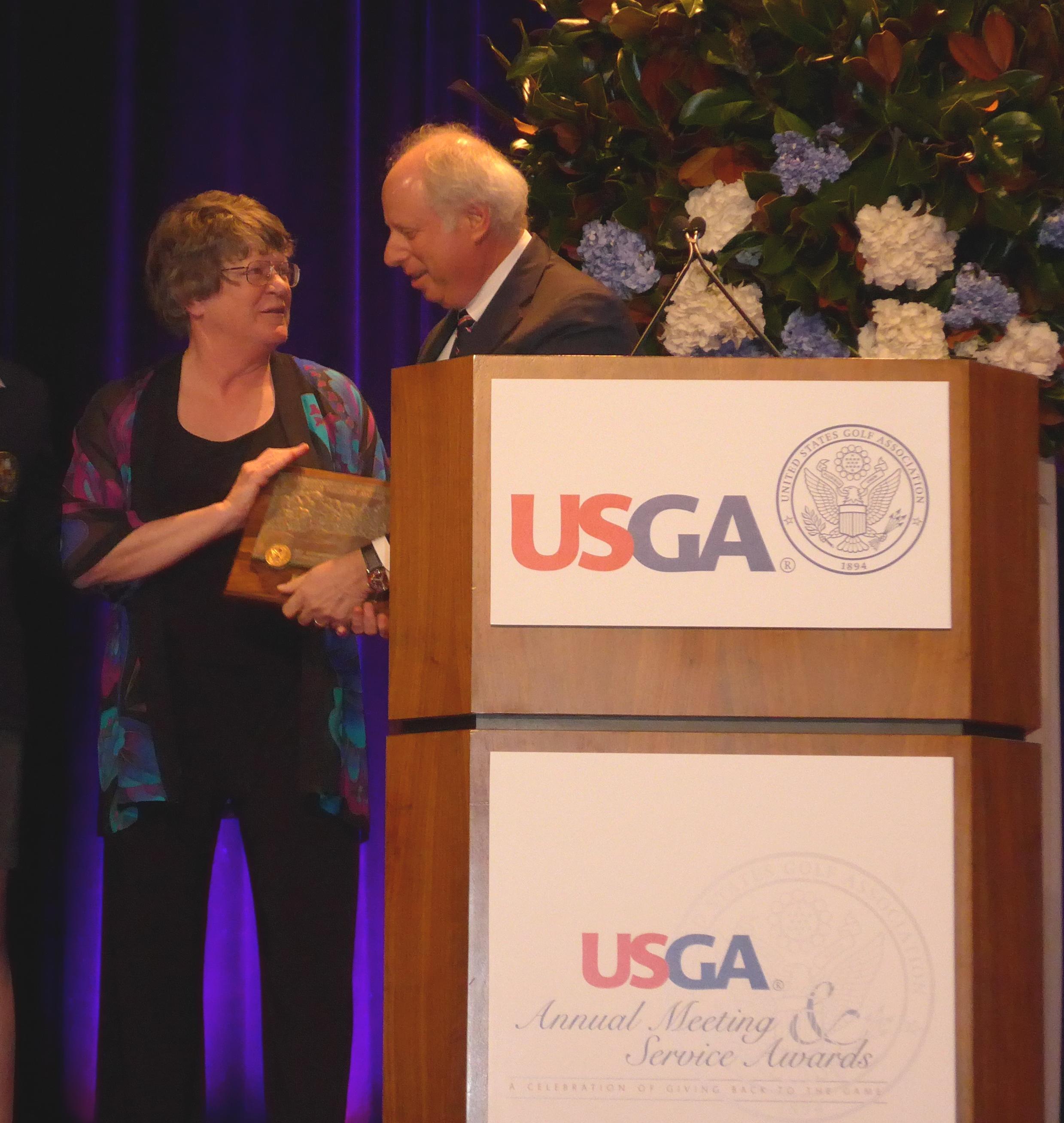 FAR HILLS, N.J. – Dr. Patricia Vittum received the Green Section Award on Feb. 7, 2015, at the USGA’s Annual Meeting and Service Awards in New York City. Presented annually since 1961, the USGA Green Section Award recognizes an individual’s distinguished service to the game of golf through his or her work with turfgrass.

Vittum, a professor at the University of Massachusetts’ Stockbridge School of Agriculture, has conducted significant research on the biology and management of turfgrass insects and the effectiveness of biological-control methods. A recognized industry leader, she is a widely sought-after resource for practical information about turfgrass pests.

“Dr. Vittum has the unique ability to be a hands-on researcher who can effectively communicate her work with practical advice for the field practitioner,” said Dr. Kimberly Erusha, managing director of the USGA Green Section. “Her contributions to the study of turfgrass insects have helped to establish industry standards and best management practices. We are proud to recognize her accomplishments and celebrate her legacy.”

A native of western New York, Dr. Vittum earned her undergraduate degree in chemistry from The College of Wooster (Ohio). She earned her master’s and doctorate degrees at Cornell University, where she worked with Dr. Haruo Tashiro, an international expert in he biology of turf insects. Vittum also served on the USGA Turfgrass and Environmental Research Committee from 2002 to 2008.

Vittum joined the faculty of the University of Massachusetts Amherst in 1980, becoming a professor in 2000. She currently teaches classes on the use of pesticides in the environment and turf management programs. She was recognized with the Excellence in Teaching Award by the Entomological Society of America, Eastern Branch in 2004.

“Pat is an exemplary faculty member and a true leader,” said Mary Owen, turf specialist and turf program coordinator at the University of Massachusetts Extension. “She has dedicated her career to advance the professionalism and competence of golf course superintendents and staff, with protection of the environment as a high priority.”

Vittum’s research has been published in several well-respected industry journals and publications. She is the principal author of the second edition of “Turfgrass Insects of the United States and Canada,” which is widely regarded as the leading publication on turf entomology. She also co-authored the “Handbook of Integrated Pest Management for Golf Courses.”

“When Dr. Erusha called to tell me about this honor, I was overwhelmed,” said Dr. Vittum. “The list of previous honorees includes so many giants of the turf management world, including people from academia, USGA Green Section directors, and top-shelf golf course superintendents. I am honored and humbled to be joining their ranks as a recipient of the distinguished service award. This is the highest award to which I could aspire, and it is an incredible affirmation of the studies I have conducted as a turf entomologist and the years I have spent as an educator.”

The Service Awards dinner consolidates the presentation of many of the USGA’s most significant honors into a single, inspiring event, highlighting the people and organizations whose selfless dedication and notable accomplishments have made an important contribution to the USGA and its mission to serve the game. In addition to the Green Section Award, the Joe Dey Award, Ike Grainger Award and Herbert Warren Wind Book Award will be presented at the dinner. The USGA’s highest honor, the Bob Jones Award, will be presented in a public ceremony during the week of the 2015 U.S. Open Championship at Chambers Bay in University Place, Wash.

Through the work of its Green Section, which was established in 1920, the USGA has emerged as one of the world’s foremost authorities on research, development and promotion of environmentally friendly practices and a more sustainable game. With a professional staff dedicated to these efforts, the USGA is among the leading agencies in the U.S. devoted to golf course turf, its playing condition and its management.