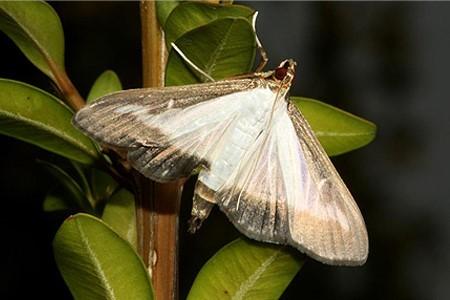 Did you purchase and plant boxwoods this spring? Have you seen these moths or caterpillars? If so, state officials request that Massachusetts residents inspect newly planted boxwoods for signs of box tree moth, and report any findings by calling 617-626-1779.

Box tree moths are an invasive pest that feed on the leaves of boxwood shrubs and can cause complete defoliation, eventually killing the plant. While state and federal inspectors have not found any signs of box tree moths at the nurseries, state officials warn that some of the plants may have been sold before inspections began, or were purchased out of state and planted in Massachusetts. MDAR and APHIS urge anyone in Massachusetts who may have purchased boxwood shrubs this spring to check the plants for signs of the moth. Click here for more information about box tree moth.

Spotted Lanternfly (SLF), Lycorma delicatula, an invasive insect native to Asia, was first detected in the United States in 2014, in southeastern Pennsylvania. This highly destructive pest has spread rapidly across the northeastern region of the United States. SLF has the potential to cause catastrophic damage to Massachusetts agricultural and horticultural industries, as well as lasting negative impacts on the environment.