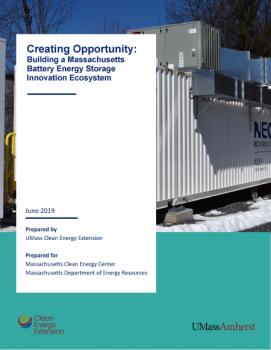 UMass Clean Energy Extension (CEE) produced the report for the Massachusetts Clean Energy Center and the Massachusetts Department of Energy Resources. The authors analyzed a selection of academic institutions and industry groups and provide recommendations for fostering connections that will position the state as a global center of BES innovation, commercialization, and jobs creation.

“This analysis sheds new light on the essential building blocks of the Massachusetts battery storage industry,” said Dwayne Breger, Director of CEE. “It clearly shows that the industry is starting to take root and, with a little help, could grow even faster to the benefit of electric ratepayers, the environment, the economy, and people across the state.”

Over 70% of the Massachusetts BES companies surveyed were spin-offs of Massachusetts academic institutions, suggesting the research institutions are serving as primary creation “engines” for the industry. In addition, the study revealed that major multi-national corporations are establishing BES laboratories in Massachusetts, and are actively hiring technical talent from within the state’s skilled workforce. Brian Storey of the Toyota Research Institute (TRI) indicated that the TRI location in Cambridge was established specifically because of its proximity to the Massachusetts academic research community.

The study is an outgrowth of a special Legislative Commission established in 2017 to consider means to enhance the success of energy storage entrepreneurship and business creation in Massachusetts. On behalf of the Commission, CEE surveyed Massachusetts energy storage stakeholders and national battery testing facilities for Energy Storage and Battery Test Facilities: National Benchmarking Report.  A key conclusion of this initial study was “that access to technology testing equipment could greatly benefit battery entrepreneurs and emerging energy storage companies, and that substantial equipment and available capacity likely existed within the state university system, private universities, and private companies that can be useful to new ventures. Further, facilitating the connections between battery testing demand and supply may be an effective and low-risk means to advance emerging technologies, leverage academic research facilities, and maintain battery technology development and business growth in the state.”

Among other recommendations, the report suggests the creation of a state BES leadership consortium, a series of regular in-person industry events and networking opportunities, and the creation and dissemination of a Massachusetts BES innovation ecosystem brand. “Effectively connecting and communicating about this important ecosystem represents a sizable opportunity for the Commonwealth, and represents an attractive ‘value proposition’ to BES researchers and commercial ventures,” said Breger.