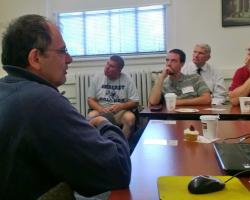 Janko Božič, professor of animal behavior and beekeeping at Ljubljana University, Slovenia  visited the Center for Agriculture, Food and the Environment at the University of Massachusetts, Amherst on June 15, 2015. Professor Božič recently met with officials at the United Nations about bee conservation and to establish a World Bee Day in recognition of the importance of these insect pollinators to food crops and agriculture around the globe.

Slovenia, a country the size of New Hampshire where 8,000 people keep bees, one of the highest concentrations on the planet, is known as the Bee Capital of the World. Božič, who received his PhD from Louisiana State University and was a Fulbright scholar at Oklahoma State University, is an expert in honeybee physiology and behavior.

He offered a power point presentation about the Slovenian model beehive and discussed how it might be used in conjunction with the popular Langstroth hive used widely around the world. Božič also relayed that Slovenia uses very little pesticides, perhaps resulting in healthier pollinator populations.