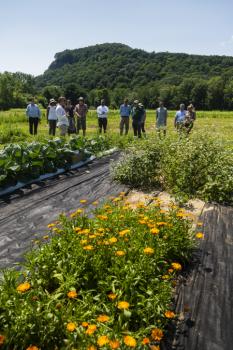 On August 2, members of the state’s Food Policy Council visited the UMass Crop and Animal Research and Education Center in South Deerfield following a regular meeting of the Council held on the UMass Amherst campus. Agriculture Commissioner John Lebeaux, chair of the Council, Representative Daniel Donahue, 16th Worcester, and other state officials toured five project sites at the farm and heard from faculty, extension staff and graduate students on their work.

The first stop on the tour was the organic crop land farmed by undergraduate students from the Stockbridge School of Agriculture as part of the ‘Student Farming Enterprise,’ a two-semester-plus-summer academic program, where the group heard from two students as well as Program Director Amanda Brown. A little way down one of the farm roads winding through the 358-acre facility, the group paused so that Professor Lynn Adler, biology, could explain the long row of small tents filled with blooming flowers, which are part of her ongoing research on bumblebees and the ways that bee and flower traits affect disease transmission in the insects.

Next, Extension Professor Masoud Hashemi, Stockbridge School, introduced PhD student Alexa Smychkovich, who described her applied research project involving the co-planting of kohlrabi and faba bean. The fourth stop was at a hoop house literally filled with forty varieties of tomatoes, many of them rare wild tomatoes originating in South America. Ana Caicedo, professor of evolutionary biology and PhD student Jake Barnett, discussed the research to identify genetic traits that could help tomatoes resist disease and pests. Tastes of tomatoes were a popular part of the event.
Last on the tour was an extension research project being conducted by Extension Educator Sue Scheufele of the Extension Vegetable Program looking at pest management and genetic resistance to pests in vegetable crops, particularly cucumbers.

The farm is managed by the Center for Agriculture, Food and the Environment at the University. The five projects were funded by USDA-NIFA through the Mass. Agricultural Experiment Station, the National Institute for Health, the Stockbridge School of Agriculture, and NESARE, Northeast Sustainable Agricultural Research and Education. 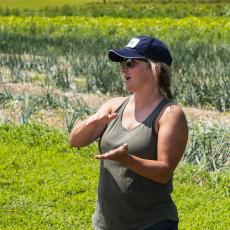 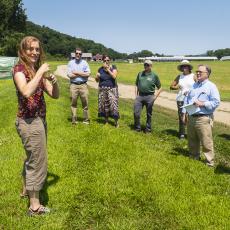 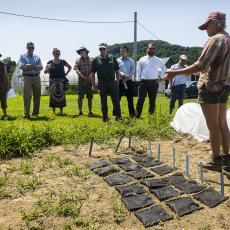 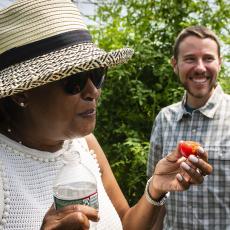 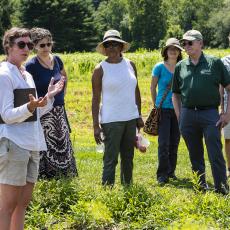