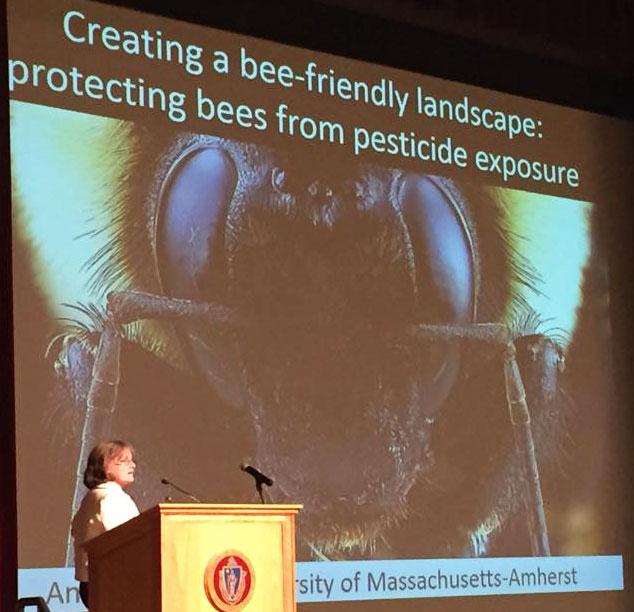 Did you hear the sound of buzzing emanating from UMass on March 26? It was the gathering of over 300 bee-focused individuals from throughout New England at a symposium to learn about pollinator health for agriculture and the landscape. The first–time symposium drew beekeepers, educators, landscapers, farmers and others to a packed full day educational program of research-based information about native bees, honey bees and ways in which to protect pollinator health.
Experts from the University of Massachusetts Amherst, the University of Maine, and the Connecticut Agricultural Experiment Station shared their expertise and latest scientific research. Topics included: considerations for designing pollinator support plantings; neonicotinoids in agriculture and landscapes; and factors that constitute a bee-friendly landscape.

The full day program was moderated by Dr. Anne Averill, Department of Environmental Conservation, UMass who also spoke about creating a bee-friendly landscape to protect bees from pesticide exposure. Dr. Averill spoke about the different classes of pesticides and their risks to pollinators and how they interact with other stressors. She advised if using pesticides to read pesticide labels for bee safety information listed under “Environmental Hazards,” users select pesticides with short persistence and avoid dusts and encapsulated formulations. Dr. Averill said that hazards can be reduced by applying pesticides at night or very early morning when fewer bees will be foraging and when volatilization due to heat is at a minimum, applying when drift is minimized and paying attention if attractive weeds are in bloom.

Joan Milam, University of Massachusetts, adjunct faculty in environmental conservation, shared information about the diversity and conservation of native bees in the northeast. She told the audience that over 20,000 varieties of bees exist worldwide, 4,000 of them are in America and 378 of these species have been identified in Massachusetts. According to Milam, the work of pollination by bees is so important that if all bees died out, 25% of the human population would starve: one in three bites of food is pollinated by bees. For detailed information on thousands of bees, Milan referred people to the Encyclopedia of Life.

Dr. Frank Drummond, professor of insect ecology at the University of Maine, told the audience that pollinator health is in a dire situation with tremendous die off at 30% every year. Several issues contribute to this situation. Among them: climate change with much more rain occurring in Maine over the last decade. More rain leads to fewer pollination days and to a fewer number of warm days, with the consequence of a decrease in the number of larvae.  Another problem is changing landscapes, particularly those that result in a loss of habitat.  He suggested the future of a healthy pollinator population lies in better treatments for parasitic infestations, better breeding, changes in the industry and a shift to heavier reliance on native bees. His tips included use of the front edges of landscapes for foraging bees and he also mentioned another planting organic fields which dramatically affect queen bees for the following year.  Professor Drummond made clear that Maine is working hard on improving the health of bumble bees.

Parasites, such as the Varroa mite—are a major concern for beekeepers dealing with colony collapse disorder as are other threats to bees (insecticides, tillage, habitat loss) under discussion. Drummond answered the question on many people’s minds: whether or not pathogens affecting honey bees are a threat to native bees. He said that when native bees are close to honey bees, the increase to exposure of pathogens is greater. 60-80% of native bees are exposed, but that exposure does not necessarily kill them. The status of native bees is that some are increasing (such as yellow-banded bumble bee) while others are decreasing. The environment and pollinator habitats are changing: again, this is bad news for some species and good for others. Pesticides can dramatically affect some bees, but not necessarily all of them.  Drummond told the crowd that the most effective action they could take take would be aimed at enhancing the population growth of bees: minimizing pesticide use (especially insecticides) and planting pollinator gardens for bee food.

Dr. Kim Stoner, associate agricultural scientist at the Connecticut Agricultural Experiment Station, provided an update on neonicotinoids, a class of chemicals that has become controversial. With respect to acute toxicity (bee kills), she stated that there are at least two primary issues for bees and these chemicals:  dust from seed-treatment of corn, and inappropriate applications contaminating plants in bloom attractive to bees. There have been a number of bee kills associated with planting corn seed treated with neonicotinoids that may be related to dust released into the air. This dust may come into direct contact with bees or may drift onto flowers that are attractive to bees, or onto adjacent weeds or other plants around the edges of the field. In Canada, where hundreds of bee kills associated with corn planting have been reported, the government requires corn to be planted with a “fluency agent” (an oil-based substance rather than talc or graphite) as a lubricant in the planter box, and they also recommend a number of other precautions to reduce the generation and spread of dust to address this problem. Another cause of bee kills has been spraying neonictinoids during full bloom during the day, when bees are actively visiting the plants. The Environmental Protection Agency now requires those neonicotinoids that are highly toxic to bees to have labels with precautions to reduce bee exposure. With respect to the possibility of sublethal effects on bee colonies that might affect the health and long-term survival of the colony, she said that sublethal effects have generally been found at neonicotinoid concentrations above “field-realistic” levels – those to which bees are frequently exposed in the field.  There is still uncertainty, however, about what the concentrations of neonicotinoids might be in the pollen and nectar of plants treated with relatively high rates per plant – for example in drench applications to ornamental plants.

Dr. Lois Berg Stack, University of Maine, offered many design concepts to plan a garden that will support the health of pollinators. She encouraged attendees to, “Think like a bee, think like Mother Nature and think like a land manager.” She enumerated ten ideas to consider when establishing a bee forage.  These included: choosing a sunny site, add milkweed to the mix of flowers, provide water and nesting sites and establish a weed management plan prior to planting perennials.

The symposium was sponsored by UMass Extension, a program of UMass Amherst’s Center for Agriculture, Food and the Environment. 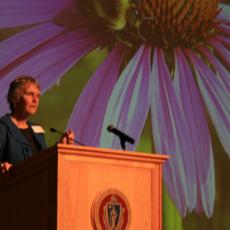 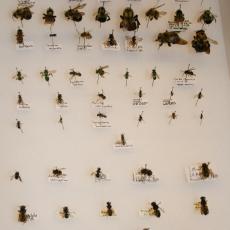 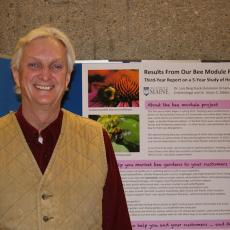