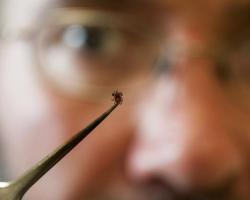 “One Deer Tick Bite Can Change Your Life…”

As spring explodes into bloom in Massachusetts, residents are eager to get outside and reconnect with their yards, great hiking trails or a sweet-smelling meadow. A very timely reminder for all of us: while hikes are inviting, remember what may be lurking in the woods and grasses: those dangerous ticks. Be careful.

A Conversation with Larry Dapsis, Tick King of Cape Cod 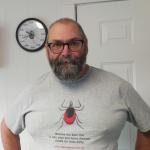 “I now think like a tick.” Entomologist Larry Dapsis joined Cape Cod Cooperative Extension in 2011 as deer tick project coordinator and entomologist and is a member of the Barnstable County Task Force on Lyme and other tick-borne diseases. His massive educational work on Cape Cod goes well beyond his 9:00 to 5:00 job where, among other tasks, he leads over 80 workshops a year. When not officially on the job, he dons his now-famous tick t-shirt at grocery stores to invite conversations. Although grabbing a bottle of milk and loaf of bread takes him longer, he says that he does not mind. Dapsis is a man with a mission: he wants YOU to know about ticks and how to avoid catching the diseases they spread. His three point protection plan is straightforward, just like his personality: protect yourself, protect your yard and protect your pet.  “Tick-borne diseases are preventable.”

Dapsis has been a lover of insects since the age of five. He earned his master’s degree in entomology at the University of Massachusetts Amherst.  Thirty-six years of professional[LD3]  pest management experience (at Ocean Spray and Black Flag) includes working with insects common in vegetable crops, cranberries, and in households.  All the street creds needed to be a walking encyclopedia of tick facts.

Larry told us that tick activity has been especially high in spring 2018, with its greater than normal precipitation. Tick populations grow when it is wet, because of the higher ambient humidity (it’s not the rain that matters per se, it’s the humidity). Ticks are moisture-seekers and thus can stay out for longer periods of time hunting for dinner in damp or rainy weather. On the other hand, when it is dry, they bury deeper into leaf litter in search of moisture. A somewhat new revelation, supported by research data, is that the incidence of Lyme disease on the islands of Nantucket and Martha’s Vineyard is much higher than the incidence in the rest of the state… because humidity is higher on these islands since they are surrounded by water.

Another recent finding is that Barnstable County (Cape Cod) is the only county in the state in which the incidence rate is not rising. This has gotten the attention of the Harvard School of Medicine.  As they looked into this statistic, they discovered that Barnstable also happens to be the only county in the state with an aggressive education program.  Larry was recently interviewed by a writer for public radio working on a series of stories on their exceptional educational efforts.

Facts You May Not Know, But Should

By far, Permethrin is the most effective tool in the box. This insecticide can be sprayed onto clothing where it will remain effective through six washings, or one can purchase factory-treated clothing where Permethrin remains active in repelling insects through 70 washings.  Larry Dapsis tells us that 60 seconds of exposure to Permethrin is sufficient to kill ticks.  Treating footwear is very important since nymph stage ticks (poppy seed-sized) bury into leaf litter on the ground.  If you are treating pants, turn them inside out after the spray dries and then finish by treating the bottom 6” of cuff.

Children under age of 10 have a higher incidence of Lyme disease than any other age bracket. Why is that?  Dapsis believes it is because they are not using enough Permethrin in footwear and outer clothing.  It is highly effective in killing the tick upon contact with treated clothing, and the tick is guaranteed to die. But the question must be asked, is it safe?

Professor Rich shared that, “Permethrin is safe for humans but not for arthropods (including ticks).  It works against the arthropod nervous system by disrupting sodium channels.  The ion channels of mammals (like us) are not as susceptible to pyrethroids (eg. permethrin).  It’s also thought that mammals have higher metabolic rates and so the pyrethroids break down quickly before they have an opportunity to act against neural cells.  Empirically, we know that permethrin has very little toxicity in mammals and appears to have no carcinogenic activity.”  The Centers for Disease Control (CDC) states that permethrin cream can be used on children as young as 2 months of age. There are no studies available on use from birth up to two months.

According to a 2017 EPA document https://www.epa.gov/insect-repellents/repellent-treated-clothing , the toxicity profile is extremely low for humans.  Permethrin has low dermal absorption. As with any insecticide, read the label and use the product according to manufacturer’s instructions. 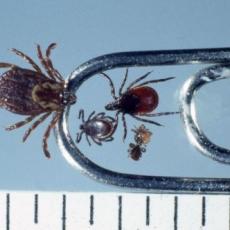 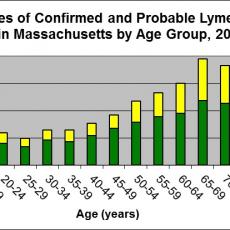