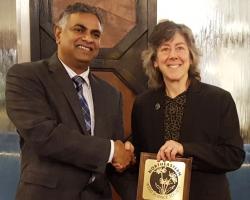 Dr. Hilary Sander, extension associate professor at the UMass Cranberry Station, has received the Northeastern Weed Science Society’s (NEWSS) highest award on January 4, 2017 at the annual meeting of the Northeastern Plant, Pest, and Soils Conference in Philadelphia. She was elected “Fellow,” the highest honor that can be conferred upon a member. This life-time achievement award recognizes her steadfast dedication to research in the field of weed science.

Sandler joined the Executive Committee of NEWSS as Editor in 2004, publishing proceedings until her term ended in 2007.  She was elected as an officer and served as NEWSS President in 2010-2011. Along with other past presidents, Sandler is active in promoting the Foundation’s work in furthering education for young weed scientists and has been a member of the Student Awards Committee.  She currently represents NEWSS as Secretary of the Weed Science Society (WSSA) of America and as a member of the WSSA Publications Board. She is an Associate Editor of Weed Science and served on the WSSA Strategic Planning, Outstanding Graduate Student Award, Nominating, and Science Policy Committees.

At UMass Extension, Sandler is state coordinator for integrated pest management (IPM) for Massachusetts.  She started her science career working in citrus pathology at the Citrus Research and Education Center in Lake Alfred, Florida. In 1990, she became the IPM Specialist at the Cranberry Station in East Wareham.  Sandler was quickly bitten by the “weed science” bug and started a doctoral program in 1997 researching the impact of weed management strategies on cranberry vine colonization.  She has since expanded her activities to address the weed science research and extension needs for cranberry growers in the U.S. and Canada, as well as other small fruit growers in Southeastern Massachusetts.  Her research interests include biology and management of dodder and perennial weed species, such as poison ivy and Rubus species, which invade cranberry production areas.  Sandler has published over 40 peer-reviewed articles and more than 80 abstracts on cranberries, citrus, and grapes; she recently translated and edited a 293-page identification guide for weeds in cranberry.