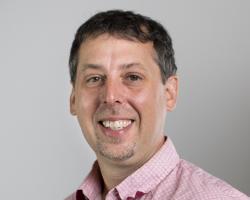 AMHERST, Mass. – Hydrogeologist David Boutt, an associate professor and geoscientist the University of Massachusetts Amherst since 2005, has been named the Birdsall-Dreiss Distinguished Lecturer for 2018 by the Geological Society of America’s (GSA) hydrogeology division. The award is based on “outstanding contributions to hydrogeology or a closely related field through original research and public communication, and the potential for continued contributions to the profession.”

Boutt will formally receive the award at the 2017 Seattle GSA national meeting in October. In January 2018, he will begin a twelve-month national and international speaking tour ending with a lecture at the 2018 GSA national meeting. The GSA notes that the list of Birdsall-Dreiss lecturers includes many outstanding scientists, and the number of institutions they visit has grown each year.

In the first year, the lecturer spoke at just one campus, but it is now typical for the lecturer to give 40 or 50 talks, mainly in the U.S. and Canada but also now in Europe, Asia and Australia through the establishment of its LaMoreaux International Lecture fund. Boutt says he already has lecture tour stops planned in China, Chile, Argentina and South Korea and he hopes to add many more.

He says of the honor, “This is tremendously exciting and an absolute honor to be among the distinguished hydrogeologists who have been previous lecturers. I have always felt that this lecture series is one of the most important and influential actives that the GSA hydrogeology division is involved in. I will do my best to represent our discipline and GSA in the lecture tour. When I was an undergraduate I attended a Birdsall-Dreiss lecture and thought, ‘Wow, I want to be a hydrogeologist. They get to integrate a lot of different aspects of the geosciences to solve important problems.’”

Geosciences chair Julie Brigham-Grette says, “This is one of the highest international awards given by the society and it will bring wonderful recognition to Dave and to our department. The award is extremely special and we are very excited. Special thanks to professor Michele Cooke who chaired the nomination process.”

Boutt has prepared three different lectures for the 2018 tour on topics related to his research, such as groundwater and climate change, roles of groundwater flow in hydrologic processes, and the role of water and lithium in the global transition from fossil fuels to green energy.

The GSA notes that each year the Birdsall-Dreiss Lecturer is chosen by a panel of former lecturers who make their choice solely “on the reputation of prospective candidates for their research excellence and ability to communicate.”The endowment pays for part of the lecturer’s travel and they usually obtain additional travel funds from their home institution.

Boutt received B.S. and M.S. degrees in geological sciences from Michigan State University in 1997 and 1999, where he focused on understanding the impacts of land use change on groundwater quantity and quality at the watershed scale. He earned his Ph.D. from the New Mexico Institute of Mining and Technology in Socorroin 2004 and held a postdoctoral position at Sandia National Laboratories before coming to UMass Amherst.

During his Ph.D. research, he was awarded an AGU Horton Research Grant for work on the coupling of fluid flow and deformation in fractured and faulted media through the development of discretely-coupled fluid-solid models. His current research program seeks to advance understanding of the role of groundwater in catchment-scale hydrologic processes.

His research interests have taken him on board the Japanese Drilling Vessel Chikyu during International Ocean Discovery Program Expedition 319, the first riser drilling operation in its history. Some of his current work is focused on understanding the origin of lithium-rich continental brines in northern Chile and in the Great Basin of the western United States. Boutt has also contributed extensively to understanding the hydrogeology of a former cranberry bog that is part of the largest freshwater restoration project in New England.

The Birdsall Lectureship began in 1978, as part of a bequest left to the GSA’s hydrogeology division in memory of John Manning Birdsall, a prominent geologist and dedicated public servant who retired from the Water Resources Division of the U.S. Geological Survey. One of the most popular Birdsall Lecturers was Shirley Dreiss from the University of California, Santa Cruz. Shortly after her very successful 1992 lecture tour, Dreiss was killed in an auto accident. Her many friends and admirers honored her by contributing to the lectureship, which was renamed the Birdsall-Dreiss Lectureship.