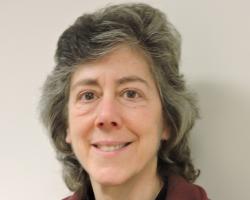 Hilary A. Sandler, an extension associate professor of cranberry integrated pest management (IPM) and weed science at the University of Massachusetts Amherst, has been named director of its Cranberry Station in East Wareham after a national search. She will become the sixth director in the 106-year history of the internationally respected center for research and education on a native fruit of Massachusetts.

Sandler takes over from long-time director Carolyn DeMoranville, who is retiring. A botanist who conducted research on nitrogen, phosphorus, and potassium management in cranberry production, she also studied cold tolerance/hardiness and frost protection, water management interactions with pest control and plant nutrition, sustainable production, fertilizer use guidelines for Massachusetts cranberry production and best management practices at the station since 1982.

DeMoranville, a member of the third generation of a Massachusetts cranberry growing family, was named director of the station in 2002, following in the footsteps of her late father, Irving DeMoranville, who directed the Cranberry Station from 1981 until his retirement in 1996.

Jody Jellison, assistant vice chancellor for agricultural research and engagement and director of the UMass Amherst Center for Agriculture, Food and the Environment, says, “The campus community and her colleagues in East Wareham very much appreciate Carolyn DeMoranville’s long and accomplished career in dedicated service to the station, its research and education mission and to the cranberry industry. She and her family are an important part of the history of cranberry growing in this state and her leadership has been outstanding. ”

Jellison also welcomes Sandler’s experience and expertise. She says, “Hilary will bring many strengths to the Cranberry Station. We are extremely lucky to have her and look forward to continuing the station’s world-recognized excellence in cranberry research and outreach. I’m confident the station will continue its strong partnership with the cranberry industry under her leadership and I’m delighted she has accepted the Director position.”

Sandler began work at the station in 1990 and has conducted research on techniques for perennial weed control as well as the management of dodder, an annual parasitic plant that can significantly decrease cranberry yields. She has maintained an active research and outreach program, serving as associate editor for the journal Weed Science since 2008. In 2015, Sandler published a pictorial Weed Identification Guide for Cranberry. She has also served as Massachusetts IPM coordinator since 2013.

Sandler will lead an eight-member team in research and educational outreach whose goal is to maintain and enhance the economic viability of the Massachusetts cranberry industry. Team members have expertise in plant pathology, weed management, water and nutrient management, plant physiology and entomology. The group works to bring new technologies and techniques to the industry and to address production problems. Sandler is also interested in developing new collaborations to identify ways to support graduate students who work on problems important to cranberry growers.

A resident of West Barnstable, Sandler is an active participant in her community. She represents UMass Extension and science as career options at local high school job fairs and frequently judges local school science fairs. She has served on local agricultural commissions and on library boards. She also has a passion for greyhound dogs, having rescued five since 2003.

The UMass Cranberry Station, a part of the UMass Amherst campus, is an outreach and research center charged with the mission of maintaining and enhancing the economic viability of the Massachusetts cranberry industry through research and outreach and serving the public by supporting economic development and protection of the environment.