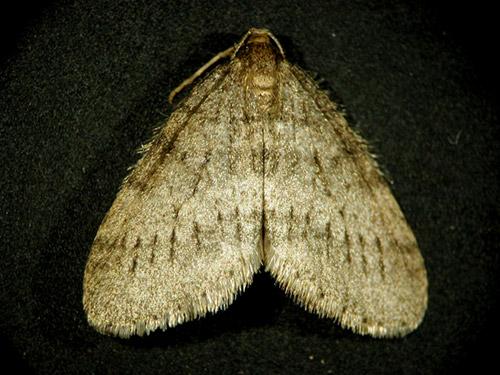 Over the last decade, many Massachusetts communities have reported millions of moths emerging around Thanksgiving and continuing throughout December. Coincidently, in the spring, these same communities have witnessed an astonishing number of small, green caterpillars defoliating maples, oaks and other deciduous trees. The major caterpillar pest thought to be responsible for this foliar destruction was initially thought to be the fall cankerworm. However, in 2003, by collaborative work done by Deborah Swanson of Plymouth County Extension (retired), Robert Childs of UMass Extension, Dr. Joseph Elkinton of UMass, and Dr. David Wagner of UConn it was discovered that the damage was done by a newly introduced insect called the winter moth (Operophtera brumata), a member of the Geometridae family.

Initially, the hardest hit areas were in Eastern Massachusetts, especially southeastern MA, including Cape Cod. The winter moth’s known range in Massachusetts and beyond is now much better understood due to the extensive pheromone trapping that has been orchestrated by Dr. Joseph Elkinton at the University of Massachusetts, Amherst. Winter moth is at its heaviest numbers east of Route 495, on the North and South Shores, including Martha’s Vineyard and most of Cape Cod, as well as in towns in and around Boston. However, it is also found as far west as Worcester. Winter moth is now established throughout Rhode Island and has been picked up in traps, in southeastern NH, coastal Maine, southeastern CT and out on Long Island, New York. Massachusetts still appears to have the largest and most damaging populations of this pest.

Hatching is now occurring in Eastern MA and most of RI.  Last year it defoliated about 80,000 acres in eastern MA.  We have addressed the issue of what the abnormal winter effect may be on this pest in the press release.