Winter moth larvae are NOT on the bogs YET!!

We expect to start seeing them on the bogs in the 3rd or 4th week of April.  It would be wise to sweep at least once or twice towards the end of April.  Winter moth larvae are green spanworms.  There is no official threshold for winter moth, but a general gauge would be 18 since it is a spanworm.  These spanworm will eat the developing bud and can do substantial damage.

Winter moth larvae have hatched in the area and are actively feeding on blueberry, apples, and maples.  They are tiny, about 2 mm, and are very hard to see.  They feed inside the blueberry bud and often do substantial damage without being seen.  Cranberry is apparently still too small for them to use as a food source, but once we reach cabbage head stage, they may appear.

There are many control options for spanworms including Avaunt (not on flow-throughs), B.t., Delegate, Intrepid, Confirm, Imidan, Lorsban, Orthene and Pyronyl.  If you have a history of bad winter moth, or saw moths flying in November and December near your bog, you should consider a prophylactic spray towards the end of April.  Damage may be done to the developing tips before populations can be detected.

It was reported to be a very high population year for winter moth in our area of southeastern Massachusetts.  However, the early hot spell (week of 3/19-23) followed by the remarkable cold nights (3/26 on) may have caused substantial mortality.  We are scouting blueberry and cranberry each week. We have been finding them at many sites with blueberry at a 5-10% infestation.  We have not found any winter moth on cranberry this year YET.

Winter Moth remains the top insect of interest at this time in MA for the landscape, nursery, and forest, as well as for blueberry and apple growers.  The caterpillars have now virtually all hatched on the North Shore, greater Boston area, South Shore and Rhode Island.  They still lag behind on Cape Cod due to cooler climate at this time of year but will be very active within a couple of days.  Initial observations from the Elkinton lab at UMass Amherst suggests that approximately 20% of winter moth eggs (not on Cape Cod or in RI) were killed by the excessive temperatures during the third week in March and that as many as another 20% were killed by cold temperatures after hatch on the night of March 26.  However, there were millions of eggs over-wintering on host trees in MA this past winter and now the many remaining yet tiny caterpillars are actively finding and feeding on the foliage and flower buds of those plants experiencing early bud opening.  Some tiny caterpillars are still seen sitting on the trunks of trees waiting for warmer weather to venture up to the canopy.  The warmer temperatures predicted for this week should drive this process quickly.  Oak buds are still rather tight and therefore not available to the caterpillars but apple, blueberry, lilac, birches, and all maples are well-enough along to provide food for these caterpillars.
For infested plants with opened or opening buds, a spray of Bacillus thuringiensis Kurstaki (B.t.K.) can be quite effective.  However, B.t. needs to be ingested by the caterpillars to be effective and if the foliage is not yet near to being fully expanded, then wait for that to happen.  Otherwise, the new foliage material that appears over the next several days, after spraying B.t., will not be covered with B.t. thus allowing the caterpillars more leaf surface to damage before ingesting the pesticide.  An application of a product that contains Spinosad as the active ingredient should provide excellent results at this time or in the coming weeks during the caterpillar feeding stage.  Many pyrethroid insecticides are labeled for caterpillars as well.  Avoid spraying apples and crabapples with Spinosad or pyrethroid products if they are in bloom.  Pyrethroids can be very harsh on pollinators, such as bees.  Spinosad products are toxic to bees at the time of application but this threat diminishes significantly 24 hours after application.
Reported by Robert D. Childs, Extension Entomologist, Plant, Soil and Insect Sciences Department, UMass, Amherst 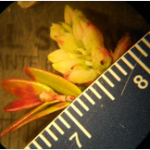 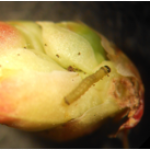