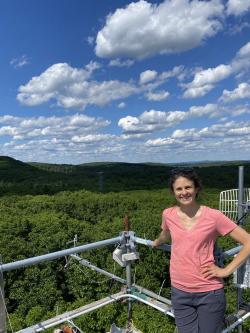 There aren’t many people who say things like, “I always really liked nitrogen… It’s just an element that has really struck me.” Ashley Keiser is one of those people. Her passion for all-things ecosystem ecology is infectious.

Keiser grew up in a middle-sized New Hampshire town, where she spent much of her young life outdoors exploring the natural world and fostering a concern for the environment.

“Even from when I was little, I wanted to be a part of protecting the environment,” remarks Keiser. “I remember being in high school, in the public library, and seeing an ecologist on the cover of Science magazine… That was my first exposure to what an ecologist was.” She remembers thinking to herself, “Wow, that would be a really cool job.”

Inspired by that magazine cover in high school, Keiser signed up for a summer ecology field program at Saint Paul School in NH. There she worked on her own independent research project. She recalls thinking, “This is what I want to be doing.” From there, Keiser studied environmental science at the University of New Hampshire, where she worked for a forest ecology lab sorting leaves and measuring carbon and nitrogen content.

“It set me down this path of thinking, ‘Well, I love to think about the intersection of chemistry and biology and the natural environment… how can I continue to explore how the natural world works to think about how we can preserve it?’”

After finishing her degree, Keiser participated in a Research Experiences for Undergrads (REU) program at the Smithsonian Environmental Research Center, where she worked with nitrogen and isotopes. She went on to work as an environmental consultant for a few years, which she says “really helped to ground me… I think graduating from college I had this idealistic view of the world [and] of conservation fields. Working in environmental consulting, I think you realize a lot about how the world works, how progress is made, and how sites are cleaned up.”

Working as an environmental consultant was a valuable experience, but ultimately Keiser was drawn back to the science and research elements of environmental science; So, she attended graduate school at Yale University School of the Environment. There, she became more focused on applying ecological principles to the soils.

“Often as humans, we are focused on this visible world that we can see around us,” explains Keiser, “but we can’t see what’s beneath our feet… Getting to dig deeper into this black box and think about how soils support life on Earth through regenerative processes of decomposition and the cycling that happens in the soil is really fascinating to me.”

This idea of the soil being a black box of potential discovery is at the heart of Keiser’s current research at UMass.

“You can pick up a handful of soil and have millions of different species of these microscopic organisms in a single handful of soil,” Keiser explains. She illustrates that, because these species are so abundantly diverse, there is a widespread belief that the microbes function the same in every type of environment. “A big part of my work is showing that’s not true, that these microbes are influenced by their environment, just like plants are… To me, [it is] a novel and exciting discovery.”

Keiser’s research most often takes place in eastern temperate forests, at the UMass Crop and Animal Research and Education Farm, and in her Soil Ecosystem Ecology Lab. She and her students perform lots of decomposition experiments, which look at how quickly dead organic matter breaks down and where the dead biomass ends up. These experiments often utilize stable isotopes as a tool to trace certain elements into different soil pools and to peel back more and more layers of the black box.

“Understanding how carbon and nutrients cycle and how it ties to the existing or past soil microbial community is important when we think about site fertility and what plants and ecosystems can be supported at a specific location,” explains Keiser. “It’s all informing and helping to create an understanding of how ecosystems can be self-supporting and self-reliant moving forward.”