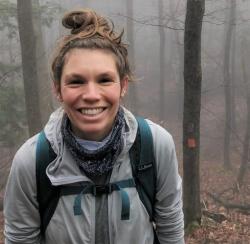 While Hannah Whitehead has been working at the University of Massachusetts Extension for four years, her journey to get here took her on a rich, life-building trek.

Whitehead was hired by UMass in 2018 as a honey bee extension educator. In that role, she offered workshops on beekeeping topics, wrote fact sheets, and conducted research on bee health. In July 2021, Whitehead joined the UMass vegetable extension team. Last summer, she visited regional farms to scout for insect pests, gave talks at grower meetings, and assisted with applied research projects. She also became part of the team that produces the Veg Notes newsletter. Subscribe here. This past winter, in addition to working on articles and talks, Whitehead conducted a pollination needs-assessment for vegetable and fruit growers and now uses those results to plan new programming on pollinator topics for 2022 and beyond.

When not at work, Whitehead is an outdoors enthusiast, connecting with nature, tending her community garden plot, hiking with her biologist husband, and fine-tuning her tree and bird identification skills.

Whitehead’s path to Extension has taken many twists and turns that has perfectly matched her wide-ranging interests. She grew up outside of Cleveland, Ohio, often going backpacking with friends and family in the Allegheny National Forest in western Pennsylvania. Whitehead majored in history at the University of Chicago, where she was fascinated by the industrial revolution and the way it changed the relationship between people, the built environment, and the natural world. One summer during college, she volunteered on a sheep dairy and fell in love with farming. This led to a cascade of related work opportunities in agriculture and Whitehead went on to study urban agriculture, during which time she was assigned to work on an urban garden in Chicago while collecting research data. She was then placed on a botanic garden-run farm located inside Cook County Bootcamp, a prison alternative for first-time non-violent non-sexual offenders.  Working alongside both garden coordinators and inmates was a rewarding experience.

After college, Whitehead was eager to learn more about agriculture and the natural world. She spent a season working at an off-grid goat dairy in the high desert of southwest New Mexico and completed a natural building apprenticeship outside of Eugene, Oregon. Whitehead then returned to Northeast Ohio where she worked as a research assistant at Ohio State University while also managing an organic vegetable farm down the road. On the vegetable farm she helped care for several beehives and became fascinated with bee health and pollination. At the end of the season, Whitehead started a master’s program in Environmental Science at Ohio State, with a specialization in agroecosystem sciences. Her research focused on honey bee health and disease management. Throughout her graduate program, Whitehead worked closely with beekeeper groups, which led to an interest in agricultural outreach and extension.

With a master’s degree in hand, she found her way to two vegetable farms in central Vermont, spending the winter caring for calves on a dairy farm near Montpelier. From there, her path led south to UMass Extension where she is delighted to have joined the Extension team!