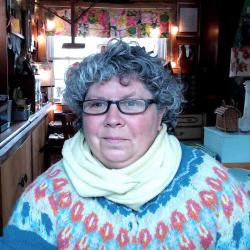 Paulina Borrego is a naturally curious person, the very quality one hopes for in a librarian.  However, if your image of a librarian is one who shushes people with a stern personality, Paulina will help you ditch those expectations at the door. Borrego is eager to help those looking for guidance.  She said, “I love the hunt for finding information and enjoy meeting people who are curious about something, then sharing in their journey of curiosity.”

During her normal workday, Borrego may be answering a patent or trademark question, finding video resources for a food scientist or documenting seed qualities for the three-year old UMass seed library. Over her professional career, she has shifted careers from chemist to high school chemistry teacher to university librarian. As a “people person” she seeks ways to be engaged with humans.

The University of Massachusetts assigns a librarian for every department and program on campus.  Borrego’s specialties match up with her interests: Environmental Conservation, Food Science, and Veterinary and Animal Science, including the Veterinary Tech Program at the Mount Ida campus.  Over half her time is spent working with faculty in three departments. Professors may ask for assistance in finding video content for a class or request her help in ordering books, journals or other materials. Most recently, there is increased encouragement for faculty to obtain patents. The slogan, “From bench to market” is a phrase employed to move their research forward where it might have practical applications in the marketplace. Which leads to her second role….

The USPTO (United States Patent and Trademark Office) was established for independent inventors. In Massachusetts, there are two official Patent and Trademark Resource Centers (PTRC’s), one at the Boston Public Library and the other at the University of Massachusetts Amherst. Borrego has served as the PTRC librarian since 2009. She helps people understand three different patent types (a utility patent for a product, process, or machine, they make up the bulk at 95%; a design patent for the way things look [a Coca-Cola bottle, for example]- these make up around 4% of all patents;  and finally, a plant patent for asexually reproduced plants such as the recent Limelight hydrangea, these make up 1% of all patents). Since color is one of the most important aspects of a plant, she is sent photographs of every plant patent on special paper. Somewhat surprisingly, Borrego receives 20-30 photographs a week requiring an extensive filing system.  Fun fact, the Netherlands is the top country for U.S. plant patents.

She then helps those seeking patents work through the application process including searches for prior art (there are 10 million patents). For more information on trademarks and patents, contact Borrego here.

Mass Aggie Seed Library: “A seed is a dream encased in hope”

Her third role is as a seed librarian. This new project was begun in 2018 when Gabriella Bosco, an undergraduate biology major, inquired about the possibility of starting a seed library. Borrego hopped right on this idea, envisioning it as an ideal community engagement project.  Her small team planned through the fall of 2018 and opened in the spring of 2019.  Now in their third year, The Mass Aggie Seed Library focuses on organic open-pollinated seeds.  Borrego meets people where they are in their seed journey and looks upon each interaction as an opportunity to educate patrons about the importance of seed saving and worldwide seed issues.

How it works: In a seed library, the hope is that gardeners will check out seeds by thumbing through packets (much like books), choose the ones they want to plant, grow the plant and then return the seeds. In this way, it becomes a self-sustaining operation.  In these early years, Borrego accepts seeds from myriad sources. She  gratefully receives donations from seed companies including: Baker Creek; Seed Savers Exchange; Hudson Valley Seed; and High Mowing. In addition, the UMass Permaculture Garden saves and shares seeds and finally, some gardeners return seeds after the season is over. Organic, open-pollinated seeds are preferred.

How you can obtain seeds:  Check the website for posting of the seed request form. It will likely be available late February or early March.  Then you indicate your seed preferences and they will be sent in the US mail.  In 2020, Borrego sent over 1,000 seed packets to 200 gardeners.  There is a possibility she may also be able to offer a traveling seed library in Amherst, check later for details.

In early February of 2021, she watched extension entomologist Tawny Simisky offer a webinar on invasive insects. It was immediately apparent that everyone needs to be on the lookout for an appearance of the dreaded Spotted Lanternfly (SLF). Borrego saw an opportunity for public education and sprang into action. She now plans to include a SLF fact sheet in each seed packet that she sends out.

When asked what she likes most about her job, she said she appreciates the freedom to work on many different projects, making every day new.