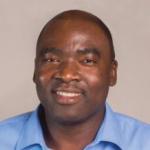 A Thriving Transplant, from Zimbabwe to Massachusetts

No doubt about it, Peter Jeranyama knows how to help plants grow. As an Extension assistant professor, he introduces undergraduate students at the Stockbridge School of Agriculture at the UMass Amherst campus to plant physiology.

Through his research work as an environmental plant physiologist at the UMass Cranberry Station in East Wareham, Jeranyama is developing best management practices to protect fragile cranberry plants from frost damage and objective approaches to cranberry irrigation. He has had major success with a new management technique called ‘frost cycling.’ Jeranyama measures moisture in the soil with constant monitoring devices and develops parameters for how remote irrigation should be triggered.  He also examines ways in which growers can cycle irrigation pumps when using them to prevent frost damage.  When these ideas are implemented and tied to automated systems, growers can trigger and monitor irrigation and frost protection remotely (via smart phone).  By monitoring temperatures very carefully, over the past two years, Jeranyama has been able to develop a method resulting in water and energy savings along with a (significant) 30% increase in cranberry production.

How does one become interested in minutia about growing healthier, more productive plants? Jeranyama grew up in Zimbabwe and was deeply inspired by an uncle who was a plant scientist, a person whom he idolized.  During his youth, he would follow his uncle’s work carefully, learning at his elbow. He was also raised on a farm and helped grow corn, peanuts and some vegetables. Such early connections to the earth helped to plant seeds for his future endeavors.

Jeranyama has an easy-going humble manner that belies the strength of his convictions and his life’s work. In 2008, he helped to create an organization: Association of African Agricultural Professionals in Diaspora through a grant from the Bill & Melinda Gates Foundation of nearly half a million dollars. The focus of the group is around issues of food security, peer mentorship and capacity building. This effort led to an invitation by the World Bank to become part of a panel whose goal was to understand food volatility and problems surrounding food access and poverty. Through a series of interactions that concentrated on education and food for poor children and agriculture, an amazing $50 billion dollars was put towards these efforts to alleviate these desperate conditions through the International Development Authority (IDA).

When not at work, Jeranyama is deeply involved in the immigrant community around Worcester. He enjoys helping people who are new to the United States: assisting them to negotiate sometimes complex systems, advocating for children in schools, and acting as a resource for immigrants throughout his neighborhood.

Center for Agrilculture, Food, and the Environment