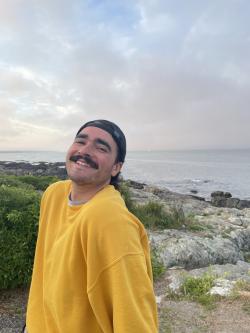 Stephen Oram’s gentle and thoughtful approach to nutrition education is clear from the minute you begin speaking with him. As a UMass Extension Nutrition Educator, Oram believes in the importance of food as a unifying force and simple joy in life.

On any given day, Oram might be found in the office connecting with collaborators on lesson plans, teaching in schools, or preparing foods for demonstrations. He educates in schools, at farmers’ markets, and in adult group sessions – and loves every minute of his job.

“Nutrition and food is something that we really have control over,” he says. “Having the knowledge to know what you’re putting in your body, and how to prepare and how to make it taste good for you gives you independence and can be a really beautiful part of life."

Oram spreads this message to all age groups, from preschoolers to elderly folks. With preschoolers, Oram’s lessons usually center around having kids learn about new fruits and vegetables, engage in a  physical activity, and read from a food-related book like Eric Carle’s The Very Hungry Caterpillar. As the kids grow older, lessons may incorporate listing healthy snack ideas and participating in food demonstrations. While youth lessons consist of more traditional teaching moments, adult group lessons are more discussion-based, while still involving food demonstrations

“Everybody’s needs are different at different points in our life,” he remarks. “It’s really fun to work with all [age groups]. Each one is special in a different way.”

Oram notes that food demonstrations are one of the more exciting parts of his job as a nutrition educator. A typical food demonstration for a youth class might look something like this: Oram will bring in two types of fruits or vegetables, such as zucchini and cucumber. One veggie, the cucumber, is likely a food that the kids are familiar with while the other, zucchini, might be new to them. After learning about how the veggies help their bodies, the kids get to actually try the cucumber and zucchini and take note of what they think about the new food, utilizing all of their five senses.

“Being there when kids try the new food for the first time is really a special place to be in that moment,” Oram says.

Oram describes himself as a bit shy when talking to people, yet recognizes that every job he’s had has involved talking to people about food. “Food is a really good thing to bridge people together. You might not speak the same language or eat the same food, but it’s something that you can talk about,” he says. “Food is like a universal thing for people.”

He explains that different spices can also teach a lot about a culture, and the ways in which people prepare foods can help bring the history of a region alive. While teaching, Oram feels like he gains knowledge just as much as he imparts it.

“I think I learn just as much as I teach from everybody that I teach no matter what age they are,” he says. “I’ve learned a lot about new foods I’ve never heard about or different traditions around food.”

In his free time, Oram embraces the same always-learning-new-things attitude that he does while on the job. During his drive to work, he enjoys listening to podcasts about spirituality, religion, or mindfulness, and spends lots of time learning about how other people live. He also enjoys biking and hiking as moving meditation where he can think about what he will be teaching.

“What really matters in life is…learning how to be more present, especially when I’m teaching so I can be there for the students,” he says. Oram encourages everyone to strengthen their own community by volunteering at food pantries whenever they can.