Visit the Cold Spring Orchard farmstand where you can find a wide selection of fruit for sale including many of the apples listed below. 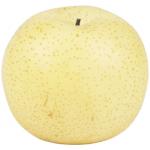 Mutsu is a cross between Golden Delicious and Indo. It was developed in Japan in the 1930's and arrived in the United States in the late 1940's. The crisp, white flesh is juicy and has a touch of tartness, for an excellent dessert apple. In taste tests of Golden Delicious and apples descended from it, Mutsu scores on top. It does not make a particularly diverting pie. Sauce will have more flavor if you leave the peels on while cooking and then separate them with a strainer or colander. Mutsu is a worthwhile cider apple. 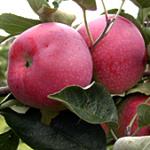 A red fall apple that matures in summer, Paulared has a beautiful solid red blush color far ahead of other apples. The flavor is tart with light to creamy flesh that is as good for cooking as it is for eating. Paulareds will store well when refrigerated. 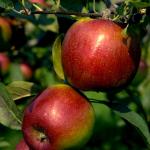 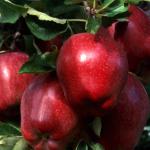 Red Delicious is a marketer's ideal : as intensely red as the apple in Sleeping Beauty, instantly recognizable, tall and wasp-waisted, gorgeous and big! Riding on these qualities, the variety has pushed regional favorites aside. The skin is thick and bitter and has to be chewed vigorously. At its best the yellow flesh can be juicy and somewhat tart, and highly aromatic. this apple does not hold up well when cooked. 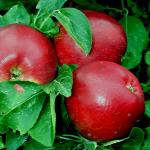 Unlike other early varieties, Redfree is a sweeter tasting apple that stores extremely well. The red and green skin is thick and the flesh is white, crisp and juicy. Redfree is an excellent dessert apple and although it can be used in pies and sauces, it should be savored as one of the best tasting early varieties. Growers like Redfrees for their genetic resistance to apple scab, making them a low-spray apple.

Rome was a chance of nature that originated on the banks of the Ohio River and dates back to before the Civil War. Rome is a thick-skinned fruit that makes good eating but finds better use as a baker and in cider. The flesh, once you bite through it , is crisp, firm, greenish white and mildly tart. 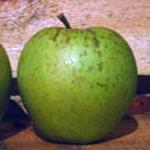 Roxbury Russet may be America's first pomological achievement, having been developed and named in Roxbury, MA in the early 1600's. A look at one suggests how the idea of a good apple has changed over the centuries, Roxbury presents a dull green, heavily marked face to the world. But the crisp, tart apple has more personality than some of today's supermarket standards. Its yellow-green flesh is firm and course textured. Roxbury is suited to eating fresh and cooking and long has had a reputation as a fine cider apple. As with most older varieties, it keeps well for months. 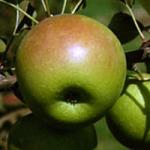 Shamrock is the East-Coast's version of the Granny Smith. This is an extremely tart, green apple that is crisp and juicy. When at its peak, Shamrock develops an attractive red blush. If you like tart apples this is the one for you, otherwise Shamrock can be combined with other apples to make tasty pies and sauce.

Reliance is one of the best tasting, red seedless grapes. While ripening, the grapes morph into an array of colors before becoming a deep purple, indicating that they are ready to harvest. The berries are small to medium in size on large fruit clusters. Reliance has a tender skin and flesh with a melting texture and an outstanding, mild fruity flavor with high sugar content.

Somerset produces compact clusters of medium-sized grapes that are excellent for eating and making jelly. The skins are tender and the flesh is juicy and very sweet. The fruit starts out a light pink and becomes sweeter and darker in color as it ripens to a full red color. The bright red color coupled with a full grapey flavor with a hint of strawberry makes it popular with most everyone who eats them.