Focusing on green and the environment
March 7, 2012

At their August meeting, the Green Giants 4-H club munched on corn chips, corn chips with a difference. The difference? These chips were covered with homemade salsa—tomatoes, garlic, green peppers, cilantro and onions—made much more satisfying by the fact that this bounty was harvested from their own garden.

Carissa Hartman-Wozniak, Stephanie Carpenter and several other Worcester County parents formed the club last winter to focus on “green and the environment” by raising a garden, according to Lynne Hartman, Carissa’s mother and a force behind getting Green Giants off the ground.

The Hartman family has been involved in 4-H for many years. While many clubs were focused on animal and livestock husbandry, Lynne felt that gardening was a better fit for her local community. The Hartmans also have a pedigree when it comes to growing vegetables: they are the owners of Hartman’s Herb Farm, a seventh-generation family farm in Barre.

While the grown-ups first planted the seed of getting a new 4-H club in business, the kids themselves quickly took over developing the club as membership grew to about 15 youngsters. Along the way, they began to gain the skills and experience needed to nurture a new start-up venture.

"It really is the kids' club," Carissa explained. "They picked the name, they elected officers and run the meetings." 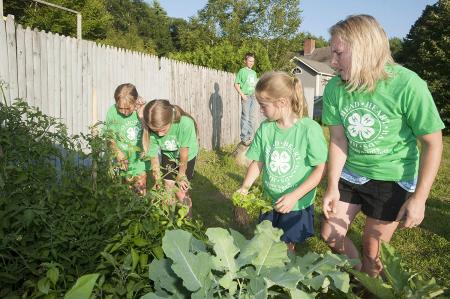 The members also decided which vegetables to plant in their raised beds and they did the watering, weeding, harvesting (and much of the eating).

Besides gardening, the members have also learned to identify different types of vegetables, discovered creative uses for plants like wreath-making and other crafts, plus made outings to nearby farms like the Hardwick Sugar Shack during maple syrup season.

Like most 4-H clubs, the Green Giants is family-oriented. Parents often attend meetings with their children and gardening has become a family project at home, bringing fresh veggies right to the dinner table. The club has also reached out to the neighborhood, hosting a spaghetti dinner last spring to raise funds for their projects and field trips. The kids waited and bussed tables for more than 120 guests, many from the area's elderly community.

"One of the great things about 4-H," Lynne explains, "is that boys and girls can be together, unlike sports teams or some other clubs."  Her twelve-year-old grandson, Cameron Wozniak, is the Green Giants' president and usually runs the monthly meetings and his sister, Chloe, 10, is a club member, too.

Lynne's husband, Pete Hartman, built raised beds from slab wood for each club member and, like most home gardens, the Green Giants' vegetable plots were overflowing with produce by late summer. That had the kids excited about upcoming 4-H fairs and fall festivals where they planned to show their best tomatoes, cucumbers and other vegetables, as well as homemade crafts. One club member even planned to enter her own fudge recipe in the Hardwick fair.

As children, Lynne Hartman and her siblings showed everything from fruit and flowers to cows at the 4-H fairs; she says putting your best work before a judge at the end of a season is a good exercise for young people.

"It's not so much the competition," she explained, "but it makes you look at what you've produced and think about how you could improve it next year. It's a learning process."

At local fairs this year Cameron showed "his" tomato, a variety of yellow cherry tomato that is unofficially called "Cameron's tomato" at the family's KennyJay farm stand in Oxford where he often works on weekends. Even though he has spent most of his youth spending time on his grandparents' farm, Cameron says he still learns a lot from his 4-H activities and looks forward to the meetings. He's made friends, he says, through the Green Giants that he would not have met in school or other clubs.

"But the best part," he added, munching on a corn chip piled high with fresh salsa, "is that we have really good snacks."