Agricultural innovation is sprouting in Massachusetts

New England agriculture is fostering new approaches and new crops that are helping growers remain profitable and serve communities. Often, this involves a new interpretation or application of some of the most traditional techniques.

One place where this kind of innovation has long taken place is UMass Amherst’s Waltham Experiment Station, the birthplace of the Waltham Butternut Squash and now the site of the Waltham Fields Community Farm (WFCF) and its World Crops Project.

The seven-acre Waltham Fields Community Farm occupies a piece of a 56-acre parcel that has long stood out as an anomaly, and as a focus for innovation, sitting amid the adjacent suburban hubbub. Donated in 1921 by dairy farmer and philanthropist Cornelia Warren, the site became the home of UMass Amherst’s Suburban Experiment Station, which counted among its many accomplishments the development of the butternut squash that carries the Waltham name.

“The World Crops planting brings together the Boston market’s growing demand for ethnic produce and the skills of recent immigrants, who have had a substantial amount of contact with this kind of farming—it’s what they know and what’s important to them,” Kozower noted recently.

A Little Brazil on the Vineyard

The UMass Extension Ethnic Crops program has also made a big hit among fans of Brazilian cuisine on Martha’s Vineyard. Frank Mangan and his team have been working with farmers and markets on the Vineyard since 2008, introducing crops such as taioba, okra and maxixe to the island. Taioba is a leafy green and maxixe is a spiny cucumber. Mangan’s graduate students promoted these vegetables at Brazilian and non-Brazilian markets on the island in 2009.

There are an estimated 3,000 people of Brazilian origin living on Martha’s Vineyard, but the popularity of the produce, which is now served in several island restaurants, quickly moved beyond its ethnic constituency, something that Extension’s Frank Mangan attributes to the spirit of culinary adventure that prevails throughout the vacation destination.

The UMass Amherst team initially worked with three farms—Morning Glory Farm, Whippoorwill CSA and Bayes Norton Farm – in creating an island laboratory for the vegetables. All three reported quickly selling out any and all taioba at their farm stands.

Check out the World Crops Program.

Wheat on the Way Back in New England

New crops don’t have to originate in far-off lands.

When most of us think of wheat, we think of “the nation’s bread basket”—massive, uniform fields in the Midwest. However, wheat and artisanal flour may soon find their way to the "made in Massachusetts" section of our local markets.

That very uniformity in the Midwest poses a threat to the heritage wheat varieties of the world, which were selected by farmers and adapted to local conditions, according to Eli Kaufman of Northeast Organic Wheat, a multi-state consortium of organic farmers, artisan bakers and Extension specialists working to bring wheat back to the farm fields of New England.

In the first year of a four-year program funded by Northeast Sustainable Agriculture Research and Education, Kaufman teamed up with UMass Extension educator Ruth Hazzard and organic farmers in western Massachusetts to plant a range of wheat varieties in local test fields. They are hoping to identify varieties most suited to the region, and those that will also produce delicious and nutritious bread. By the end of the program, Kaufman plans to develop farmer-baker cooperatives that will produce truly local or regional breads.

Forty different wheat varieties were grown this past season at the UMass farm in South Deerfield. The wheat drew a good deal of attention from farmers attending the UMass Amherst Agricultural Field Day there last spring.

"There seems to be quite a bit of interest in wheat among farmers," Hazzard said. "I think there is a market for this that didn't exist ten years ago."

Sharing the Wealth of Research 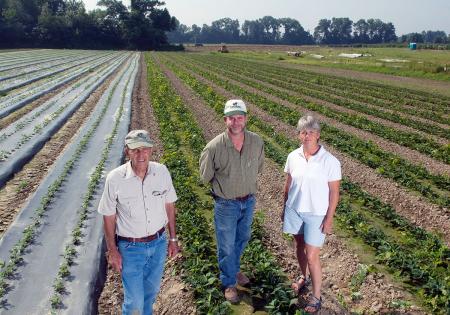 Tim Nourse, owner and CEO of Nourse Farms, tends to be on the cutting edge of the latest approaches to growing berries. For Nourse, however, innovation becomes even more powerful when it’s shared.

Nourse has long been at the forefront of advanced growing techniques at the 75-year-old farm headquartered in Whately, and now heads one of the largest nursery farms in the country, thanks in part to the tissue lab built there two decades ago when that technology was very new. From tissue, plants now can be reproduced virus-free.

Last year, Nourse, along with UMass Fruit Specialist Sonia Schloemann and Professor Duane Greene of the UMass Amherst Department of Plant, Soil, and Insect Sciences, completed a three-year study of prohexadione calcium, a growth regulator often used by apple growers. It inhibits the production of daughter plants in strawberries and produces healthier mother plants. This reduces labor costs involved in runner removal and seems to improve plant health and yield.

Nourse Farms has also helped spread the benefits of UMass Amherst research by underwriting Berry Notes, an online periodical that reaches about 400 growers and is edited by Schloemann. Schloemann says Nourse’s contributions to university efforts help farmers throughout the region.