Anatomy of an Invasion

Worcester’s Asian longhorned beetle crisis has unfolded like the screenplay for a thriller.

That script will keep developing for some time to come, with tense new twists, continued threats and a rare flash of humor. Like any good thriller, its complex cast includes one major villain and some true heroes.

UMass Extension entomologist Bob Childs has been on the lookout for the beetle known as “ALB” for years, and is part of an extended team led by the USDA Animal and Plant Health Inspection Service (APHIS) and Massachusetts Department of Agricultural Resources (MDAR) working to make sure there is a happy ending to this saga.

His efforts highlight a key Extension strength: to move quickly, effectively, confidently, and cooperatively in getting critical information to those who need it. Bob, along with UMass Amherst faculty members Dennis Ryan and David Kittredge and graduate student Mollie Frielicher, have built on Extension’s long history of research and training in urban forestry, its deep involvement in the landscape industry, and its strong relationship with the City of Worcester.

“That is the lesson here,” said Extension Director Nancy Garrabrants recently. “Effective responses to a crisis, like happy endings in the movies, don’t just happen.

Although it may have been lurking there for years, New England’s first Asian longhorned beetle – or ALB – was discovered by a curious resident in Worcester’s Greendale neighborhood on August 1.

By late December, over 10,000 infected trees had been identified and removal had begun. Others will be added to the list daily as the infestation rate topped 28-percent. The figure is expected to reach at least 20,000.

U.S. Forest service “smoke-jumpers” had been called in to join a SWAT team of tree climbers and ground inspectors, and the regulated area was doubled to more than 61 square miles. Although the beetle has not been found outside the Worcester limits, the regulated area now extends beyond the Worcester city limits to the surrounding towns of Holden, Boylston, West Boylston, and Shrewsbury.

Just beyond that area are rolling wooded hills that stretch north and west to the Berkshires, New Hampshire and Vermont – blazing with the color of fall maples, harboring the sugars that will be tapped for maple syrup in the spring.

That landscape – along with the sugar, wood products and tourist industries it supports – is at stake. ALB larvae slowly kill maples. They also attack birches, elms, horse chestnut, willows, and sometimes poplars. An infested tree cannot be saved. It must be cut down and disposed of within the infested area. In previous outbreaks in New York, New Jersey and Illinois, most of the surrounding trees have also been removed. 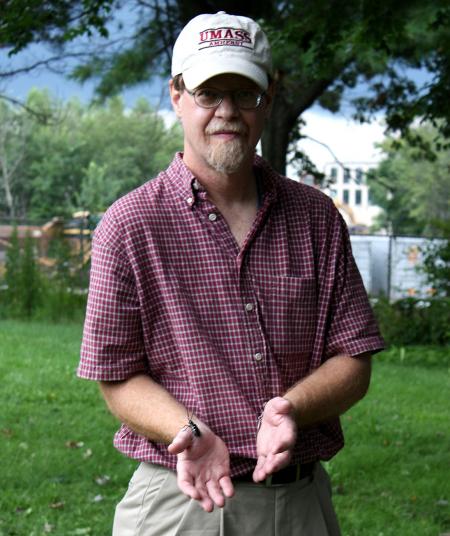 Bob Childs with his Big Bug

The Worcester County infestation is unprecedented in its impact on a residential neighborhood, its proximity to large wooded tracts, the size of the insect attackers, and the fact that they are able to kill relatively healthy trees, stresses UMass Extension entomologist Robert Childs, who responded to the crisis early on.

About 81-percent of Worcester’s 17,113 street trees are maples, with a total replacement value of over $90 million. Two thirds of those are more than 18 years old, and most are on city streets. A total of 5,736 trees are considered to be in immediate danger.

“It’s scary,” said Childs recently. “But I believe we can stop it here. We have to.”

This is the way Bob Childs describes the evolution of that effort: August 2 was a hot Friday, but Patty Douglass of the USDA’s Plant Protection Quarantine office in Wallingford, Connecticut was still in her office late that afternoon when the phone rang. It was Donna Massie, who had been working in her yard in Worcester’s Greendale section when she began wondering about the large bug with striped antennae on a nearby tree. Massie, whose daughter had just set her up with a new computer, photographed the critter with her cell phone and began putting her curiosity to work. Her sleuthing paid off. She not only ID’d the bug . . . she found Douglass.

“She was great. A newbie, but she got through,” said Childs.

When she saw the cell phone photos, Douglass immediately called Jennifer Forman Orth, Plant Pest Survey Coordinator for the Massachusetts Department of Agricultural Resources, and by Saturday morning, Douglass and Forman Orth were in Worcester. By Monday, the specimen was in Maryland in the hands of the USDA’s Systematic Entomology Lab, the only office empowered to make an official determination.

By then, Childs was already getting calls, and knew he needed to mobilize Extension resources to get the word out.

In Worcester, Childs found a small army of responders and researchers including Cornell’s Richard Hoebeke who first identified ALB in Brooklyn in 1996, and is now studying the Worcester ALB’s DNA. At the same time, Childs was concerned that important information was not immediately available to the nurseries and arborists among Extension’s stakeholders.

Navigating an imposing tangle of regulatory jurisdictions and authority, Childs worked with Extension’s Jason Lanier to create a website that continues to assemble the latest breaking news and directives. The site has become a critical source on the crisis, working in conjunction with state and news media sites.

Since then, Childs has become part of a massive community education program that has come to include training and certification workshops for those doing business in the regulated area, and community briefings on the proper handling of wood products and yard waste, as well as on identifying infested trees.

The response is especially gratifying to Pat Bigelow, who runs Bigelow Nurseries which, bordering the regulated area, became an early informal clearinghouse for the do’s and don’ts. Bigelow initially feared that federal quarantine would shut landscape businesses in the spring. She has learned that even if the crisis required her facilities to be inspected every two weeks, the business would not be shut down. In any event, such measures are far more appealing than the prospect of failing to stop the bug.

“It could get into the woods, but I really don’t think that’s going to happen, thanks to the coordinated response,” said Bigelow.

Still, Extension Forest Conservation specialist Paul Catanzaro says that many of the woodlot owners he works with are still “holding their breaths” and hoping for the best. The economic impact on many of those owners would be significant, he acknowledged, but that is only the beginning.

“Factors like privacy, beauty, wildlife habitat, and ecological health and stability – these are what drive many owners of forest land,” he said.

This story originally appeared in the Winter 2008 issue of In Common.