As spring blooms across the Massachusetts landscape, it’s hard to feel anything but love and respect for the pageantry of color, scent, and form that is New England’s flora – unless, that is, you happen to be Randy Prostak and you are eyeing a newfound patch of Japanese knotweed.

To Prostak, and other volunteer members of the decade-old Massachusetts Invasive Plant Advisory Group (MIPAG,) such innocent-looking specimens are about as welcome on Massachusetts soil as Attila the Hun.

While a crawling tree killer like the Asian longhorned beetle grabs all headlines – as it should – prolific plant invaders such as Japanese knotweed, purple loosestrife, burning bush, or Norway maple are quietly infiltrating, and in some areas, obliterating native plant communities. MIGPAG has classified 84 such species as invasive in Massachusetts.

“Insects can be dramatic,” acknowledges Prostak, a weed scientist and Extension specialist at UMass Amherst. “Plants are slower. Lots can happen when people aren’t paying attention.”

Of over 2200 documented species of plants that exist “in the wild” in Massachusetts, about a third are “naturalized” non-native species that arrived here by various means but are now firmly rooted in the landscape. While only 84 of those non-native plants are currently considered harmful invaders, those few present a dire threat to local species and ecosystems. One recent study found that over a third of New England’s rare plants – over 200 native plants in Massachusetts alone – are threatened by invasive species. While it’s hard to put a dollar value on the total damage done each year by invaders, says Prostak, it’s even harder to assign a dollar value to what is ultimately at stake: biodiversity, the biological richness that is the life blood of ecosystems. “You can’t put a value on that,” he adds.

Since 1999, the Massachusetts Invasive Plant Advisory Group has gathered together stakeholders from both public and private sectors – scientists, landscapers, nursery owners, land and wildlife conservationists, public utility and state natural resource officials, to name a few – to organize an effective defense and to mount a counterattack.

In 2005, after years of painstaking research and deliberation, the group issued two landmark reports on the evaluation and management of invasive plants in Massachusetts. Following MIPAG’s recommendations, the state’s Department of Agricultural Resources issued a ban on the importation and cultivation of over 80 invasive plant species, becoming one of the first states in the nation to do so. 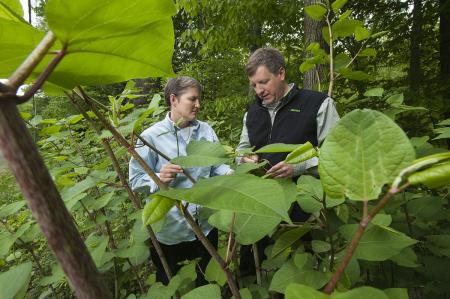 How the group got from that first meeting to the present is a case study in consensus building. Every detail from devising an action plan to deciding what recommendations to make had to be hammered out and voted upon. While the diversity of its membership was a plus, scientists, businesspeople, advocates and regulators did not always see eye to eye on solutions.

“We had lively discussions,” recalls Prostak, who regularly makes invasive plant recommendations. “We had two different sides that came together to work very effectively. There were times when people disagreed, but there was always respect for other opinions.”

No matter what the particular bone of contention, says Prostak, science always carries the day. “It’s a democracy only in the sense that we vote, but there is an overwhelming majority every time.”

Playing a central role in building consensus was Rena Sumner, executive director of the Massachusetts Nursery and Landscape Association and MIPAG’s long-serving co-chair. Since the group’s inception, says Sumner, the process has been cooperative and deliberative, even in the beginning when passions ran high. “I’m very proud of our collaboration,” she admits. “There were always differences of opinion, since livelihoods were involved. But people put away personal agendas for the greater good.”

Sumner agrees that the group’s string of successes would have been impossible without the participation – and wherewithal – of industry associations. Those entities, along with state agencies, provide funding for research.

“Industry wants to be part of the solution. As stewards of the environment, the bottom line for us is to do the right thing,” says Sumner.

This story originally appeared in the Summer 2009 issue of In Common.