Boot Camp for the Citizen Planner

Experience counts for a lot in town government here in Massachusetts, contends Southborough Zoning Board of Appeals chairman Sam Stivers, in part because so many key municipal decisions are made by volunteers with widely varying backgrounds.

At the same time, he adds, it takes more than experience to function effectively in the rapidly changing landscape of municipal planning and zoning in a town like Southborough, which hugs the busy Route 9 corridor just west of Framingham.

“Keeping up on the latest case law and new interpretations is always a challenge,” said Stivers, a former consultant with a fulltime job and no legal training. “There is a lot riding on some of these decisions, and it really helps to have CPTC.”

CPTC is the Citizen Planner Training Collaborative, a partnership between UMass Extension’s Natural Resources and Environmental Conservation Program and the UMass Amherst Department of Landscape Architecture & Regional Planning, along with the state Department of Housing and Community Development. For 15 years, CPTC has worked to give local planning, zoning and conservation officials the tools to take on some of the thorniest, most complicated and most far-reaching development and planning issues.

Stivers, a five-year veteran of the Southborough ZBA, says that a long tenure is typical of board members whose decisions have important impacts on the character of a community.

Throughout his tenure, CPTC has offered a critical link to the latest thinking, legislative developments and judicial decisions that his board will need to consider in the decisions it makes.

In the fall of 2009, CPTC offered 23 workshops in locations across the state on topics ranging from How to Hold a Public Hearing to Vested Rights: Non-Conforming Structures and Uses to Basics of Reading a Subdivision Plan. Another 18 or so workshops are held at the CPTC Annual Conference in March, which also fosters a good deal of informal networking. 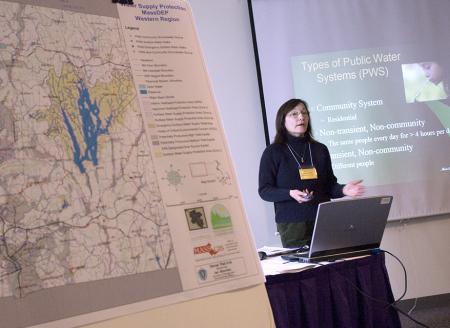 Experts in planning, zoning and resource management from a variety of state and regional agencies provide the kind of information that makes CPTC workshops and conferences so valuable.

Most of the workshops are offered at the request of the state’s 13 regional planning agencies and are aimed at meeting specific needs, notes CPTC director Michael DiPasquale. Most of the presenters are professional planners or legal experts, including members of a variety of state planning and economic development agencies.

“Some boards, especially in larger municipalities, have a clerk, and some towns may have a professional planner,” says DiPasquale. “People in these positions can be a big help to us. But a recent survey conducted by CPTC found that this is the exception in smaller towns.”

While development pressure and the threat of sprawl are well known problems, he added, the need to train new municipal board members – and the demand for CPTC workshops – is stronger than ever.

“The biggest need out there is training for new people,” DiPasquale said. “There is a real demand for new people, and for training that covers hot topics. Ethics is an especially huge area of interest just now, for instance.”

Southborough ZBA chair Sam Stivers, in the meantime, takes three or four CPTC workshops every fall, and has not even begun to exhaust the list of CPTC workshops he wants to take.

“The annual conference is helpful, too,” said Stivers. “It allows you to refresh what you know, and to rub shoulders with people who know what they are talking about, as well as people who are facing the same issues you are.”

The Southborough ZBA hears 30-40 cases in a typical year, he noted, or as many as 80-90 in a very busy year. Most are routine variances and special permits, but as often as once a year, the board is faced with an application for a comprehensive permit, which can be complicated and time consuming.

Still, Stivers has great confidence in and respect for the longstanding New England tradition that entrusts local volunteers with complex municipal decisions. Stivers says that he longed to take a more active role in his town during the years he was on the road and in the air as a consultant. Once he was able to stay a little closer to home, he felt a real calling.

“I’ve just always had an interest in public service,” he said. “I’m not that different from anybody who does this.”