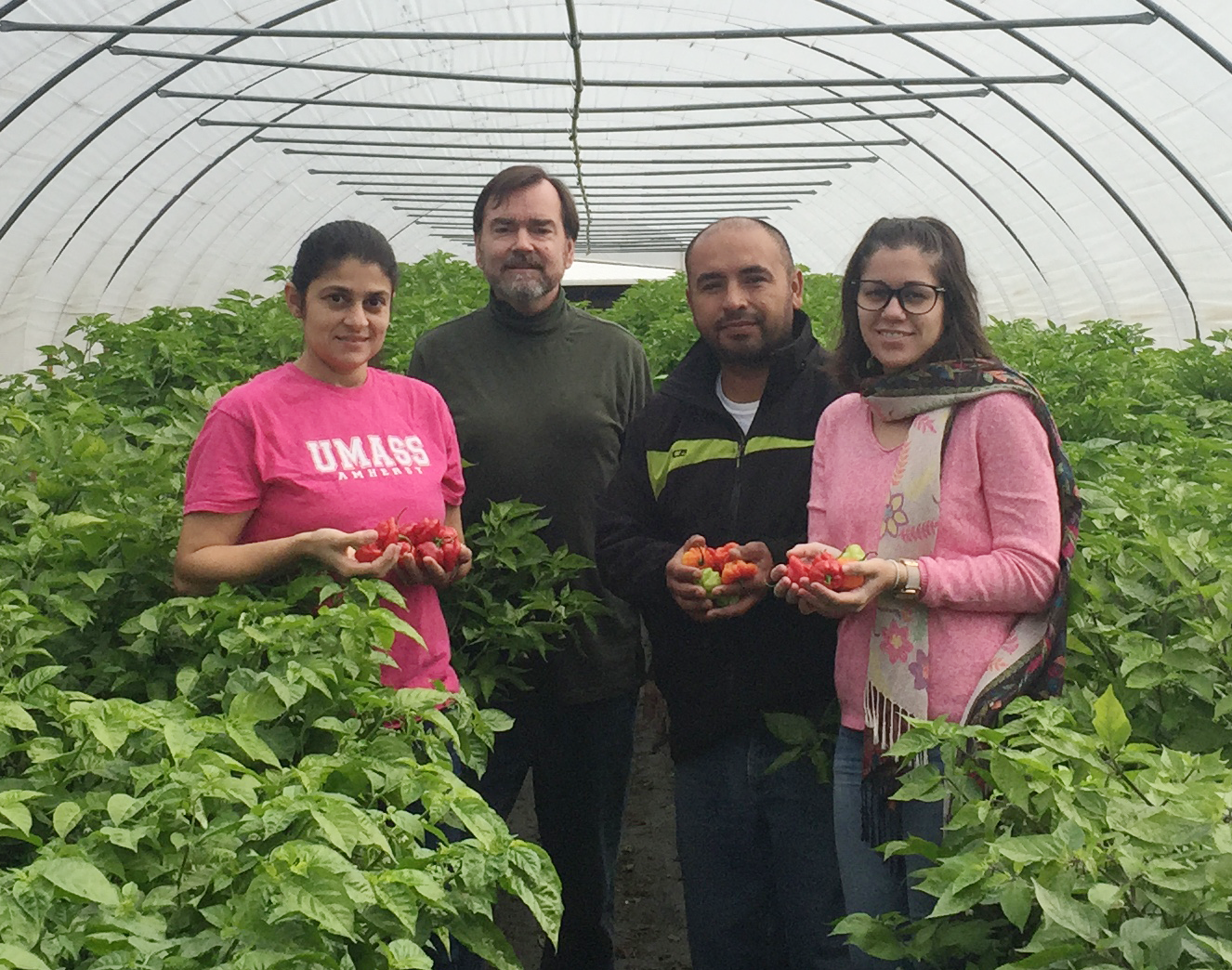 Duplicating cherished tastes and aromas from one’s home country is an understandable and powerful need for many who have immigrated from their countries of origin to Massachusetts. It can become a quest, both for those who have lived here for years and for those new to the state. However, until recently, locating sources for favorite fresh ethnic ingredients could be very difficult.

UMass to the rescue! The University of Massachusetts Amherst has been working to help those in pursuit of their native vegetables since 2000. A great example is produce from Brazil: jilo, taioba and aji dulce-used mainly by Latinos, are increasingly easier to find (and to sell), benefitting from the help of UMass Amherst faculty and staff. In 2014, the dollar value of jilo (an eggplant popular in Brazil) sold in the Commonwealth grew to $400,000. Taioba (a leafy green similar to spinach) and aji dulce (sweet small peppers) are not far behind.

With the support of a grant from USDA’s National Institute of Food and Agriculture, more help is on the way for immigrants seeking to find vegetables they grew up with. Introducing agronomist Zoraia Barros.

Barros’s soft spoken nature belies the profound passion she brings to her work.  Barros, a native Brazilian, is the ideal professional to understand immigrant needs since she not only possesses an enthusiasm for working with people but also speaks three languages.  As an agronomist, she trains interested growers and helps them decide which “weird vegetables” their target population wants. Relationship-building between the consumer and grower is key for a successful outcome.  Barros meets people across the state at farmers’ markets, in stores, and in the community to understand and determine what foods immigrants are looking for.  She then runs through her list of growers in 19 cities and towns to find matches between consumers and farms. There is a direct correlation between a larger variety of produce that can be grown on a single farm and the chance of success for the grower who takes the risk.  Barros appreciates the cultural shift that is needed to create a “one-stop shopping” experience. Most people from other countries normally shop in grocery stores rather than farmers’ markets or mobile markets. This encouragement to shift buying habits is part of her work, urging more direct contact between growers and buyers.

Much of the risk that growers must take is minimized by Barros’s work at the UMass Crops and Animal Research and Education Farm in South Deerfield. There, she investigates many questions surrounding the development of new crops, including: obtaining seeds; deciding the best techniques for planting; finding the right market for distribution; determining proper packaging of produce both to ship and to sell; and more. She starts backwards, first identifying the market and the size that will work for both the grower and the markets they serve. Through her discussions with people in the Boston area, she found that jilo (“garden egg”), while well-accepted by Ghanaians and Nigerians, is preferred in the white variety rather than the green.  Such parsing of varieties is crucial for growers serving these markets. Another important aspect is packaging. For example, many of the new ethnic crops have never been grown and marketed in Massachusetts, so the type and size of box has to be determined in order to keep the produce fresh, and also way it is displayed at the market, such as bunched, in plastic bags; these decisions all have to be vetted by the market owners and customers. Zoraia also works out the wholesale and retail prices for these crops to ensure strong sales and reasonable income for the farmer.

One paradox in this scenario is that Barros has yet to meet a grower who is an immigrant him or herself. The price of good farm land is still prohibitive for many of those new to this country. With the population of immigrants growing steadily (e.g. approximately 250,000 Brazilians now live in Massachusetts), one could speculate that land ownership may change in the future.

This focus on immigrants’ nutritional needs and wants at UMass is, in great part, because of the deep interest of Frank Mangan, Extension professor in the Stockbridge School of Agriculture. He began growing ethnic vegetables in earnest sixteen years ago to help fill the gap in food for growing immigrant populations in the United States.  His world crops website, features a database of the kinds of vegetables that are central to culturally-appropriate diets and is organized by variety, country and continent. Most of these crops are even springing up from UMass fields where the emphasis is put on planting crops that can be grown in the Northeastern U.S. The goal of the information on this site is to provide commercial farmers with all the information they’ll need in order to both grow and market these crops successfully.

In 2015, the Massachusetts Department of Transitional Assistance (MDTA) was awarded a $3.4 million grant from USDA’s Food Insecurity Nutrition Incentive (FINI) program to help low-income residents with nutritional needs. Part of that grant included $250,000 to help support the work of Barros with growing and marketing ethnic crops that are popular among immigrant groups.

Projects targeted for these funds began in the summer of 2016 led by Barros. The University has a very specific role that addresses food insecurity through increased supplies of ethnic vegetables: Teach farmers how to grow and sell them.  And this syncs up perfectly with UMass Extension’s mission.

Massachusetts is one of the most urbanized states in the country with many immigrant groups residing in cities. Mangan and his colleagues have taken the lead on collaborative projects researching crops used by Latino, Portuguese-speaking and Asian populations in Massachusetts and the region. Particularly, those crops that can be grown and marketed successfully by growers in the state.

“Latinos make up 62 percent of the public school population in Springfield and 80 percent in Holyoke. Finding nutritious foods that are popular with these populations is important work,” Mangan said. “With the growing diversity in the demographics of the state, growers are interested in taking advantage of these trends. This matches the needs of farmers who are searching for new marketing options,” Barros points out. Since 2000, there have been more than 20 million dollars of retails sales of crops introduced by Barros and Mangan to farmers in New England. This four-year project puts together information for Massachusetts farmers about which crops are popular among immigrant groups and which ones they might want to plant for a growing market. For some growers, these are unusual vegetables, while others are well-acquainted with their characteristics and unique growing needs.

On 70 acres in South Deerfield, just eight miles from the flagship campus, cubanelle peppers, chipilin, boc choi and pipian grow alongside the crops more traditional to the US markets: garlic, onions and potatoes.  Ethnic crops have had their research roots at this site for several years as part of the focus on sustainable practices for commercial Massachusetts farmers. What is new is the increase in varieties of vegetables and the hands-on research needed to understand specific challenges of growing them.

To Market, To Market

Outlets for ethnic vegetables are steadily becoming more numerous in the state, including grocery stores such as Tropical Foods in Roxbury, where owner Ronn Garry, Jr. is delighted with the UMass connection. He said, “Working with UMass is great. Both parties benefit and our customers are the biggest winners.  UMass is able to provide us with garden eggs—a very popular vegetable with our African customers. But by far, pepper and yams are most in demand.”  When asked to connect the dots between ethnic foods researched at UMass and grown around the state with customer needs, Garry was philosophical. “The world is a shrinking place. Food is becoming “on demand” like everything else. Items that were foreign and exotic are now becoming possible anywhere in the world. Putting buyers and sellers together makes what seemed impossible actually possible.” Garry, a ’89 UMass Amherst graduate, looks forward to further collaboration with UMass Extension.  Direct sales through mobile and farmer’s markets are slowly taking hold as are Community Support Agriculture (CSA) options, and local farm stands.

Want to try your hand at a new recipe? Give it a go with Sofrito. 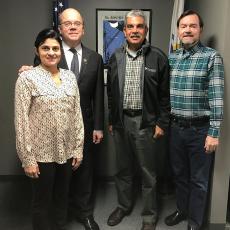 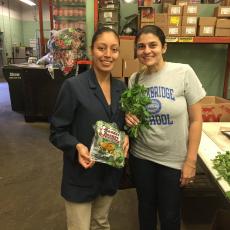 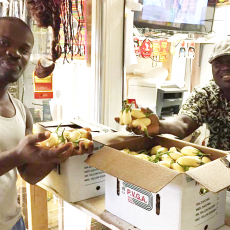 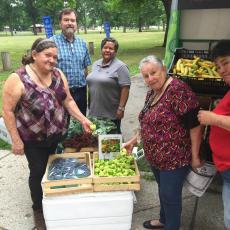 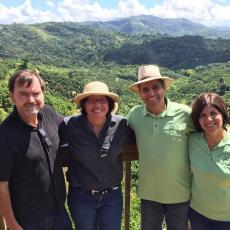 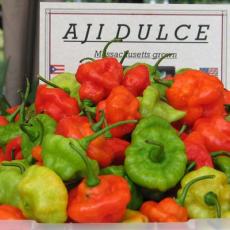