Agriculture is thriving once again in Massachusetts, nourished by a trend toward smaller farms, niche marketing, direct sales and a growing awareness of the impact of local sustainable agriculture systems on the health of people, communities and the environment.

The latest USDA Agricultural Census indicates that from 2002 to 2007 the number of farms and the value of farm products both jumped by about 27 percent, led by direct sales and organic produce. Organic sales topped $17 million. By contrast, the period from 1997 to 2002 had seen a troubling 20-percent drop in the number of farms in Massachusetts, in acreage under cultivation, and in the market value of agricultural products.

While there are many factors at work in this reversal, there is wide agreement that a public connection with and commitment to local agriculture systems has been critical to the success of Massachusetts farms.

“People are increasingly aware of what they eat and where it comes from,” says Ruth Hazzard, who heads UMass Extension’s Vegetable Team. “There is a stronger connection between consumers and growers, and that contributes to a much stronger agricultural economy.”

The connection has grown so strong that home gardeners rushed to destroy their tomatoes afflicted with late blight earlier this season because they were aware of the threat to commercial growers. Late blight was more than an agricultural threat – it was a community threat.

While there are 1,500 more farms in the state than there were five years ago – 7,661 according to the latest census – the average size has dropped from 85 acres to 67 acres. The number of farms with 10 acres or less under cultivation jumped over 50 percent during the same period. The move to smaller parcels has meant greater local crop diversity, more flexibility and lower maintenance costs for farmers.

The move to more farms with fewer acres also means that farms can thrive in unlikely places. The Newton Community Farm, with just one acre under cultivation, sits amid the urban bustle just inside Interstate 95, about 10 miles from downtown Boston. Employing a variety of intensive farming techniques – some cutting-edge and some very old – the farm supports well over 50 vegetable crops and berries, supplying farmers markets, a farm stand, the Newton Food Pantry, and the equivalent of 70 full Community Supported Agriculture (CSA) members with an estimated 30,000 pounds of produce every year.

“We could easily double or triple our CSA membership,” said farm manager Greg Maslowe. “I keep telling young farmers that they can have a great life on a tiny farm in an area like this. People want what we provide. There is a huge market.”

For both Newton Community Farm and the seven-acre Waltham Fields Community Farm, profiled in this issue, community support grows from community integration. Both farms were created with the help of non-profit groups interested in preserving land. Both offer educational and internship programs that help prepare a new generation of growers, and provide much-needed labor and expertise.

Not all Massachusetts farms with deep community roots, however, are small or non-profit. In Amesbury, Glenn Cook and his family have spent the last 30 years methodically building their 145-acre showcase farm, Cider Hill, by integrating community involvement and education with environmental, renewable energy and seasonal extension demonstration projects. Dozens of students from 17 countries have completed internships at Cider Hill, sometimes maintaining an ongoing relationship with the farm.

“They gain a good deal of expertise,” said Glenn Cook. “It’s a way to give back.”

Glenn Cook also aims to give, or sell, something back to the regional power grid some day.

With the installation of an expanded array of photovoltaic panels, Cider Hill will soon provide about 30 percent of its substantial power needs from renewable sources. That includes several wind turbines. Cook says he inherited his physicist father’s fascination with technology, and Cider Hill has been quick to adopt and employ the latest Web-based techniques for getting its word out. Fans can, and do, even follow Cider Hill on Twitter.

“We don’t have to advertise anymore,” said Cook. “The word gets around.” Indeed, new communication and information tools may even be the biggest technological innovation in agriculture in years. That innovation, he adds, had been fueled by slow steady growth in profits over several decades.

“We are fortunate to have gotten to this point and remain debt-free,” he added. “That’s what has given us the freedom to experiment.” 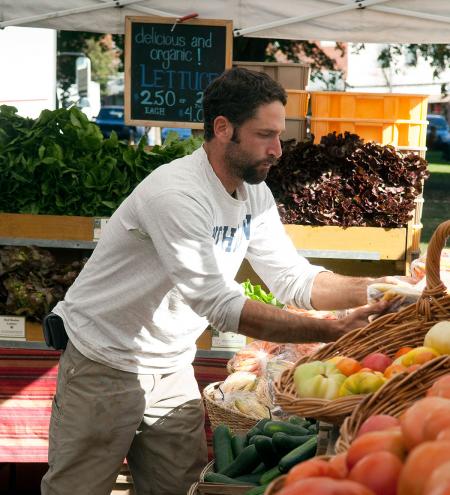 Atlas Farm’s Gideon Porth is a familiar figure at farmers markets in Boston and Amherst.

One of the strategies that has kept Cider Hill and many other farms profitable, even when the larger economy is suffering, is the growing emphasis on direct sales. Farm stands and farmers markets are among the venues that many growers rely on to get fresh produce to the public and still pay the bills. Glenn Cook says that 96 to 97 percent of his sales are direct.

“Just a few years ago, 50 percent of fruit sales in the state were wholesale,” notes Professor Wesley Autio, leader of the UMass Extension Fruit Team. “Now it is largely retail. Nothing could have predicted that.”

Direct sales are just as attractive for much smaller farms, many of which also use the Internet to spread their message. The number of farmers markets in the state has gone from 101 in 2004 to 200 this year.

Gideon and Sara Porth started the 25-acre Atlas Farm in 1998 not far from UMass Amherst’s South Deerfield Farm. While they also sell to several restaurants and markets, they have made Atlas Farm a familiar presence at the Copley Square Farmers Market in Boston, as well as at the Amherst Farmers Market. The couple has also offered a twist to its farmers market offerings: a pre-paid “market share” program allows customers to buy produce at a discount, but with greater flexibility than a CSA.

All Atlas Farm produce is certified organic, in keeping with the ever-expanding organic market. Atlas Farm, however, goes a step further.

“Beyond the word ‘organic,’ our farm is dedicated to producing food in a way that will maintain biological diversity, support natural ecosystems, and keep the land productive for future generations,” they note. “Our goal is to minimize the impact of the farm on the surrounding ecosystem. For these reasons, we add fertility to our fields by cover cropping and using organic, naturally occurring fertilizers.”

In addition, Gideon Porth, who earned a master of science degree in the UMass Amherst Department of Plant, Soil, and Insect Sciences in 2004, has been among the first to work with UMass Extension’s Ruth Hazzard in demonstrating how dried corn can be used as an efficient and environmentally beneficial way to heat his greenhouses.

A message like that can set a farm apart – attaching it to the land in a very specific way and providing a sense of place in its dealings as a business, according to Dan Rosenberg of Greenfield-based Real Pickles.

Real Pickles buys produce from throughout the area to use in its organic line of naturally fermented dill pickles, Asian-style cabbage, red cabbage, sauerkraut, ginger carrots, and tomatillo hot sauce. The company recently expanded to a new production facility.

“We work with a pretty powerful marketing message. We see it more and more among growers and in the community. Local produce offers higher quality, more diversity, and better nutrition,” said Rosenberg.

There is, of course, no firm formula for success. Not every farm needs a special niche, says Newton’s Greg Maslowe. Not every successful farm is small, and not every community-rooted farm is a CSA. And, finally, not every year is going to look prosperous, says Cider Hills’ Glenn Cook. At the same time, Cook confesses that he is unreserved in his delight that son Chadd, a recent graduate of the Stockbridge School of Agriculture at UMass Amherst, has taken an interest in making Cider Hill his life.