Winemaking is a Growing Business in Massachusetts
March 7, 2012

Winemaking in Massachusetts isn't easy, Larry Godard will tell you. A collaboration with UMass Extension’s fruit specialist Sonia Schloemann and the UMass Cold Spring Orchard Research and Education Center has made it just a little more “fruitful” for Godard and other state vintners.

Classic wine-producing vinifera grape varieties like Cabernet Sauvignon and Chardonnay have proven very difficult to grow here except in a few coastal areas. Yet Godard, who opened his Mineral Hills Winery in the western hills of Northampton last year, is at the vanguard of one of the fastest-growing agricultural industries in the state. There are now more than forty licensed wineries in the Commonwealth.

While making wine has been in Godard's family as a hobby for generations, growing grapes is a new and challenging experience for him. "I first tried to grow Reisling and Cabernet Franc but had to pull them out. I think I only got one crop of Reisling in five years," he says.

To fill out his barrels, Godard has found a good source of local grapes at Cold Spring Orchard where researchers planted Frontenac and Chardonel hybrids in 2005. Extension Fruit Specialist Sonia Schloemann has partnered with wine producers in the state to keep the vines maintained and to make fruit available to the wineries at a low cost.

"Initially, we had plans to crush the grapes ourselves and make our own wine," Schloemann said, "but we soon realized that we needed to collaborate with local winemakers. We just don't have the resources at this point."

After an early August hailstorm damaged some vines and young grape clusters this year, Schloemann put out a call for help and winemakers like Godard stepped in and "adopted" some of the vines, culling damaged fruit and pruning back leaves and new growth to let in more light and hasten the ripening process. Grape vines naturally require a lot of attention and production is labor-intensive. The Frontenac is an especially vigorous vine.

"You can prune a few shoots, walk away, and it's already grown two feet!" Godard says with a laugh. "Sonia calls the Frontenac her 'problem child.' I think that would be a good wine label."

Godard and his wife have been growing apples and blueberries, making honey and cider, and dabbling in winemaking at their Red Hen Farm in Florence for over twenty-five years. After retiring from Mass Mutual's IT department in 2009, Godard decided to devote his time to winemaking, tastings and farm tours; he now offers about ten different varietals plus fruit wine and mead.

Godard currently tends about a half-acre of winter-hardy hybrids like Frontenac, Chambourcin and Seyval Blanc which are native grapes crossbred with French varieties. His strategy is to concentrate on winemaking now and slowly build out his vineyards with more hardy hybrids

"I want to get really good at making my wine before I expand my plantings," he explains. That plan is paying off: his Seyval Blanc won a silver medal at the Big E this year. 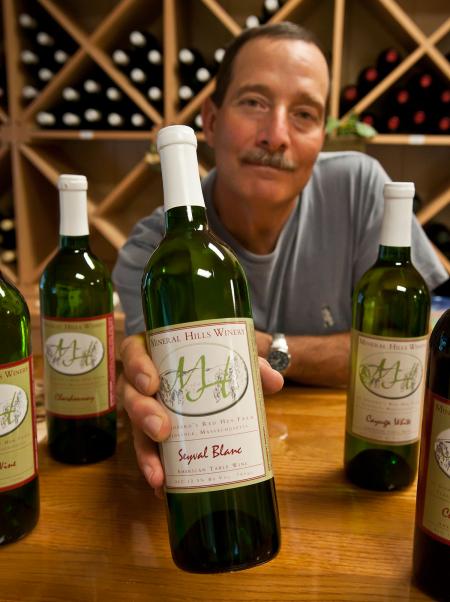 In his first year of production, Godard made about 500 cases of wine and only sold retail from the storefront at the farm. He imported some vinifera grapes from California to make Cabernet Sauvignon and Chardonnay but he found that the best sellers were his locally grown Frontenac, made in a "semi-dry style," and blueberry wines.

He aged the Frontenac in American Oak barrels for five months, "and it came out splendid," he says. He sold all of the twenty-five cases he produced "like that," he adds with the snap of a finger.

Schloemann explains that the expansion in wine production in Massachusetts is due to several factors including the development new cold-tolerant hybrid grape varieties like Frontenac.

"In the past ten years there has been an explosion in the growth and study of new hybrids," she says, "and that exactly correlates with the growth of the industry in the state." Schloemann adds that a strong local food movement, as well as retiring baby-boomers like Godard who have turned basement wineries into commercial ventures, have also played a part in the boom.

Godard is hoping to increase his production by twenty per cent for 2011 but, as if to underscore the fragility of viticulture here, a cool and damp summer season has stunted even the hardy Frontenac grapes. Mold-damaged fruit at Cold Spring Orchard and on his own vines left Godard with just one-third of his planned harvest. He says he may buy Frontenac grapes from New York to fill the gap.

"But that's farming," Godard says philosophically. "Last year our apples were hammered by frost, this year it's the grapes."

In true Yankee fashion, Godard has also found ways to use the harsh climate in his favor. Instead of investing in an $11,000 chiller to settle out potassium bitartrate before filtering, he simply moves his wine outside when temperatures dip into the teens.

Whatever frustration he may have with New England weather, Godard says that meeting other oenophiles, discussing wine, and proffering his own creation at tastings is his ultimate reward.

"I love talking to people who stop by the winery," Godard says. "I can go on forever talking about how we make wine and showing them around the farm. People are always happy when they come for tastings."