Green Where it Counts

Join Ted Wales on a quick stroll across the yard at the Hartney Greymont Tree and Lawn Specialist facility in Needham, and you quickly get a sense of the elements key to the firm’s 70-year record of success.

There is waste from last season’s projects being composted for use next spring; there are pumps to dispense bio-diesel for the company’s fleet of trucks and tractors; and there are the employees who walk around like they own the place. 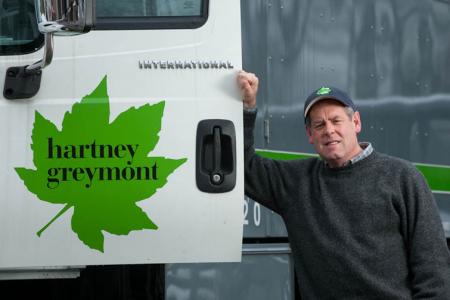 In fact, they do own the place… and they have been committed to the most innovative principles of sustainable and environmentally sound landscaping and lawn care since long before “green” hit the scene.

“We have always looked for the least toxic approach to managing any problem,” said Wales, adding that “putting the right plant in the right place” is a major component of good plant health care.

Hartney Greymont has its roots in an earlier era of financial challenge and uncertainty. Started by Mike Hartney in 1938, the firm merged with Greymont Tree Specialists in 1976. Ownership passed to its employees under an Employee Stock Ownership Plan (ESOP) in 1988, not long after it began focusing on environmental sustainability.

Wales was appointed to the UMass Extension Board of Public Overseers two years ago by former governor Mitt Romney and he expects the group to go on the offensive in 2009. He says UMass Extension is critical to the “greening” of his industry, something that current governor Deval Patrick has called for. Extension is also critical, he added, to the enduring success of agriculture in Massachusetts.

“We want UMass Amherst, the governor, and the legislators to know how important Extension is to our industry,” Wales said.

“Agriculture in Massachusetts is a $2.2 billion industry and it’s high-tech and high-end,” he continued. “We depend on the science and research at UMass and Extension is our connection to that resource.”

As an example, Wales points to the increasing demand for organic plant care but the shortage of useful science in that area.

“We’re dying for that information and documentation,” Wales said. “We want to adopt those practices but we need more than anecdotal evidence that they work.”
Wales’ childhood memories of wandering the forests around Westwood, Mass. eventually brought him back to New England after college in the Midwest, and propelled him to join the Hartney Greymont staff in his late twenties. A few years later he attended his first Winter School for Turf Managers at UMass Amherst, which he says, “completely opened my eyes to the possibilities in this field.”

Hartney Greymont has positioned itself as a progressive employer as well as a plant care company, and Wales is just one example of long-time staff members who have risen through the company’s ranks.

Hartney Greymont recruits heavily from UMass Amherst. Company CEO Mark Tobin, a graduate of the Stockbridge School’s arboriculture program, was instrumental as a former president of the Massachusetts Arborists Association in endowing a professorship in the field in 2004. One of Hartney’s newest hires, Marcie Gladdys, who recently graduated from the Stockbridge School program, finished seventh in last year’s international tree climbing competition.

Wakes says the 70-year-old company’s formula for success has been to change, not with the times, but ahead of them. “Green,” he adds, is simply “something we need to do now because it will be the only way to do things in the future.