Cranberries and bumble bees…. they go together like, well, cranberries and Massachusetts. Native bees such as bumble bees (unlike more recent transplants like honey bees) are, logically enough, very often the most efficient pollinators for native crops. But their numbers are in decline—and UMass Amherst professor of entomology Anne Averill wants to find out why.

Averill and her team of UMass Amherst researchers, along with scientists from institutions in Tennessee, Connecticut, New York, and Maine, are two years into a five-year $3.3 million USDA grant to develop strategies for protecting native bees in the northeast. Working with local farmers, the team is collecting samples and studying habitats in order to analyze what negative effects pathogens, parasites, insecticides, land use, and modern farming techniques may be having on this essential link in the food supply chain. While UMass microbiology professor John Burand analyzes specimens, Dr. Guang Xu of the Genomics Resource Lab uses genetic sequencing to test pathogens and Thomas Stevens, professor of resource economics, studies social and economic factors that affect growers. Averill, a professor in the Department of Environmental Conservation, oversees it all.

“Something nasty’s going on,” says Averill. “It could be as simple as changes in land use, but it could be much more complicated.” What researchers do know is that populations of at least two species of Northeast bumble bees have already collapsed—for unknown reasons, but perhaps owing to pathogens introduced by a species of commercial bees—and that the decline is occurring nationwide. This is in addition to the more well-known phenomenon of colony collapse among honey bees, a non-native species introduced to the U.S. from Europe in the 1600s.

The first step, says Averill, is to establish a baseline of protozoans and viruses currently present in native bee populations, and to document exactly which species of bees are using a particular site and why. With many species to track, that’s no small task. One particular focus is on what’s known as the “super bee”—the Common Eastern Bumble Bee, or Bombus impatiens—a highly successful species that so far has proven resistant to some of the pathogens and other factors that have caused other native bees to decline in numbers or “crash and burn,” says Averill.

While that’s good for the super bee, it may not be good for the ecosystem. If this stronger species continues to flourish at the expense of diversity, one rogue pathogen could decimate the population and leave farmers vulnerable. As Averill states, “The more different species you have, the more stable the ecosystem.” With the price of honey bees rising as their colonies become more scarce, it’s a lesson growers are learning all too well.

As farmers know, fewer bees means less pollination and less productive, lower-quality crops. To cope with the dearth of bees, growers typically “rent” colonies of honey bees, which are transported around the nation from farm to farm. Unfortunately, in their trip from California to Michigan to Maine and Massachusetts, these bees may bring along pathogens that can transfer to local bee populations.

Creating safe habitats for native bees becomes more challenging as land is increasingly lost to urban settings and monocultures. Keeping bees healthy and abundant requires a variety of flowers that bloom throughout the season. Averill and her team are encouraging local cranberry growers to forgo mowing of flowering plants on their idle lands or to consider planting pollinator gardens around their bogs to provide food for native bees throughout early spring and late fall, when cranberries aren’t in bloom.

“Cranberry flowers require pollination,” says Averill, “and bumble bees and several other native bees are far better pollen movers than honey bees are.” Because honey bees store pollen in their hives, they may sometimes skip pollen gathering and visit flowers just for their nectar. Bumble bees, on the other hand, need to forage for pollen more often. Additionally, the method that bumble bees use for gathering—grabbing onto the flower and vibrating their wing muscles to shake pollen loose—is better suited to the structure of cranberry flowers. “It’s a perfect system,” says Averill.

That’s why the 15 Massachusetts cranberry growers working with Averill are so dedicated to preserving the health of native bees by opening their land to her team for sampling, information exchange, and habitat manipulation. The cooperative relationship between researchers and farmers has been crucial to Averill’s efforts, she says. “The growers I work with are so incredibly interested and willing to make changes. They trust that what we’re doing is important. They really see themselves as keepers of the land.”

“Right now we’re doing everything we can to understand and support diversity, because we know the impact of losing it,” says Averill. “It’s comparable to years ago, when most small communities in our country had little shops and cafes, but then we became very homogenous with large shopping centers. The richness of the experience of interacting in small ways with each other was lost.”

“We need to ramp up our understanding that growers should factor in bumble bees, rather than depending on honeybees alone,” she concludes. “Everything in concert.” 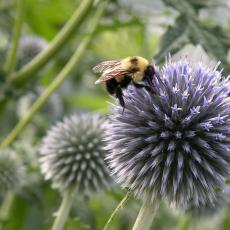 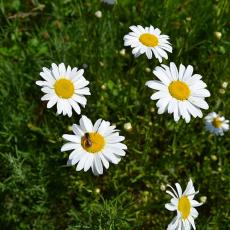 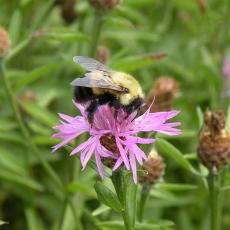 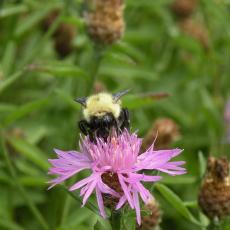 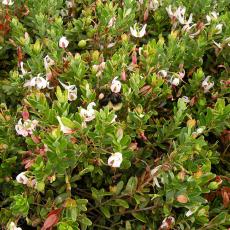 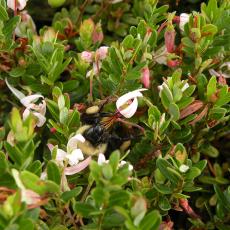 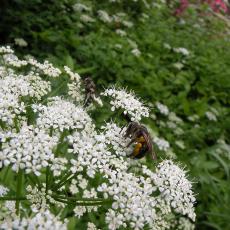 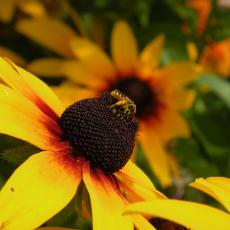 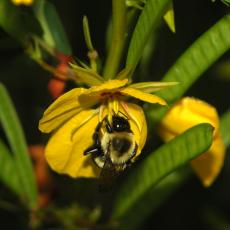 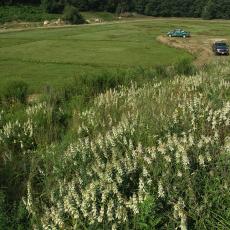