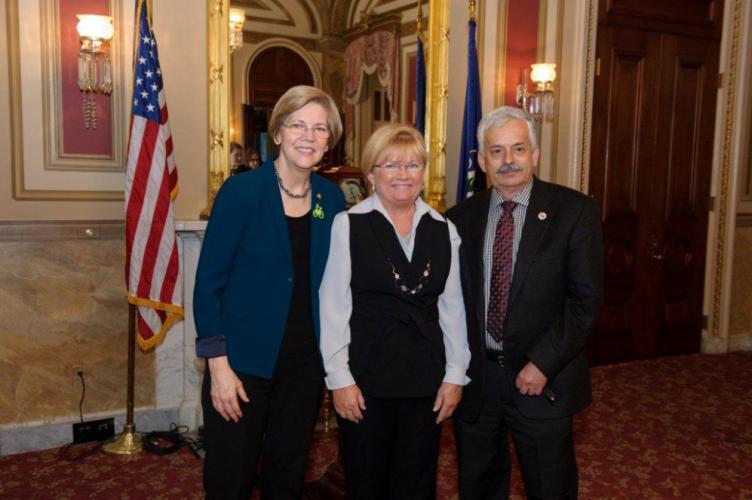 Looking for a dedicated, informed and passionate advocate for agriculture in the Land Grant University system? Look no further: Ken Nicewicz (pronounced Neesh-way) is the guy. Nicewicz has served as the University of Massachusetts representative to “CARET” for 16 years. The Council for Agricultural Research, Extension, and Teaching (CARET) is an organization of volunteer grass-roots supporters of the Land Grant University system that meets every year in Washington, D.C. and holds regional meetings throughout the year.

Ken, an active farmer from Bolton, Massachusetts, is appointed by the Dean of the UMass Amherst College of Natural Sciences. His goal is to meet with the state’s Congressional leaders to discuss the benefits of the Land Grant University system, a system that has elevated U.S. agricultural research, extension and teaching since its inception 150 years ago.  When Ken spends time with Congressmen and women, he quietly and persuasively helps them to a better understanding of agricultural, food and environmental issues. He advocates for the agricultural budget and the farm bill. One of the most important tasks he undertakes, with great success, is building solid relationships with our representatives so they understand the vital importance of supporting the broad agricultural work of the University.

Stepping Into the Role

How does one get involved in this essential volunteer post?  According to Ken, he was already doing this kind of advocacy work long before he was appointed. Years ago, he worked alongside now-retired UMass Extension Integrated Pest Management (IPM) leader Bill Coli, to promote IPM at the federal level. Karen Hauschild, then a UMass Extension horticulture specialist, was very impressed with his advocacy and suggested to then Dean Robert Helgesen that Ken would make an excellent CARET representative. She has certainly been proven correct, many times over.

Despite his busy farming life, Ken makes time to understand the crucial issues. He makes a point to develop personal relationships with the Washington D.C. delegation and their staff and he helps to ensure that funding for the work of agriculture at UMass stays strong. Throughout the tough budget decisions of sequestration, his efforts, along with other CARET delegates from around the nation, resulted in significant increases, allowing the work of the University in this area to remain robust. He pays particular attention to capacity-building funds that help the work of the food industry and infrastructure; funding for the Smith-Lever Act that supports Extension; Hatch and McIntire-Stennis funds that support research through the Mass. Agricultural Experiment Station and competitive funds under the Agriculture Food and Research Initiative (AFRI) program from National Institute for Food and Agriculture at USDA. 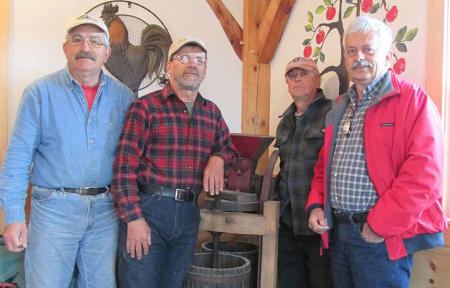 Ken Nicewicz and brothers, Tom, A, David and Ken, at family farmstand

It’s not as if Ken and his family don’t have a thriving farm to run… When asked why he does this involved and time-consuming volunteer advocacy work, he says that he loves giving back to those who have helped him make his own farming business grow. Over the years, Ken has attended UMass “twilight meetings” and other educational workshops and events. He credits his participation in these events for the knowledge that has taught him how to grow his own farming enterprise.

Initially, his family farm grew fruit sold only to wholesalers. However, over the last 20-25 years Ken and his brothers have established a retail operation and expanded their product lines by adding peaches, plums apricots, blueberries, Asian pears and nectarines. More recently, they have added a full line of vegetables. About twenty years ago, UMass Extension educator Alden Miller suggested they sell to new direct markets. (And twenty-five years ago, farmers’ markets were not nearly as prevalent as they are today, nor as well understood as a valuable sales method.) Fast forward to 2014: today the Nicewicz Family Farm sets up markets at ten sites, six days a week. One of his favorite markets is the University of Massachusetts Medical Center in Worcester, where the farm sells to myriad customers including hospital professionals, patients, plumbers, kitchen staff and others. Ken reports that he especially enjoys the rich language mix at this site. Their farm’s bottom line is far better now, a fact he attributes to the learning he has soaked up through talking to UMass faculty and professionals. 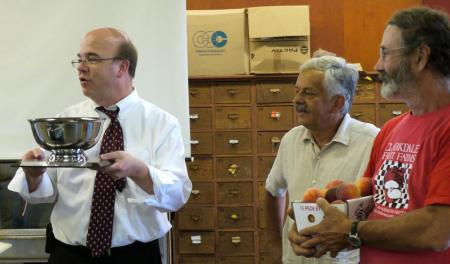 Many of the accomplishments of which he is most proud are centered around people. He is grateful for the “fine university system” that has taught him so much -- a situation that motivates him to give back. The hard work and trust he has amassed with the staff of the late Senator Edward Kennedy has been valuable and very productive over the years. For example, through this office, he was able to advocate for the need to establish regional diagnostic facilities in response to concerns about food security that are linked to terrorism, post 9/11.  His admiration is clear for the work of Congressman James McGovern (D- 2nd District-MA), and the leadership role he has taken in the fight against hunger.