Look back at a career, and an enduring commitment 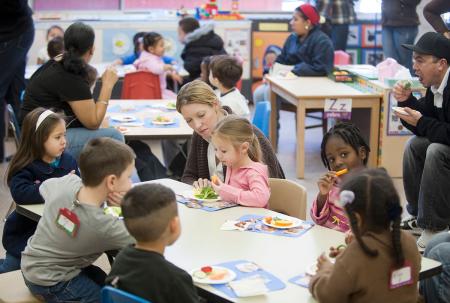 This Worcester Head Start Program is one of many sites where Extension's nutrition educators make an impact on people's lives.

Since she first entered Extension’s Worcester County office in 1980, change has been the one constant, says Pat Culross, who has long supervised Extension Nutrition Education programs in Worcester.

Culross has witnessed and participated in dramatic changes within the Extension organization and its services. She has seen important shifts in nutrition research, in how that new knowledge is conveyed, in how services are offered, in the cityscape of Worcester itself, and, most importantly, in the needs of her clients.

Now, this January 29, thirty years after entering that door, Culross walked out and into retirement.

“I still can’t believe some of the ways things have changed in the city,” said Culross. “Even physically it’s quite different.”

The one thing that never changed, however, was Pat Culross’s commitment, and that of other nutrition educators, to helping some of the most vulnerable families learn how to choose healthful foods in the most affordable ways possible.

“More than ever, there is a real need for nutrition education,” she said.

When Culross started out, first as a fresh-from-college volunteer and then as an educator, Extension had offices in each county. Fast food, though prevalent, had not overwhelmed the food-scape. Culross said recently that she looks back at those times with a certain fascination.

“We stopped home visits around 1990, in part because of safety issues, and we started working with a lot of other local agencies,” she said. “They have always been good partnerships, and we are still working with many of the same agencies.”

“We also started to learn more and more about teaching in groups, and about group learning,” she said. “That continues today.” 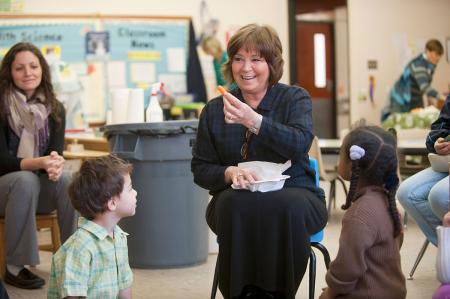 Pat Culross retired in January as director of Extension's nutrition education programs in Worcester after 30 years working with city residents like these pre-schoolers.

The new teaching style has meant meeting clients on their own terms, adapting nutritional information to, and showing respect for, the cultures, traditions and needs of the successive waves of new residents from other countries. It has meant adapting to the changing shapes of families.

Adaptation has also involved gathering Extension programs, especially in nutrition and
4-H youth, under the same roof. With the elimination of most county Extension organizations, it became important to “get everybody back together,” said Culross. At first, that roof was in a branch public library in the early 1990s. Over the next few years, through funding crises and layoffs, the staff moved several times before nutrition educator Bill Coleman helped steer the Extension staff to the then-new Martin Luther King Center on Chandler Street, a small business incubator.

That was 1997, and Culross had become program supervisor for nutrition education in Worcester.

Since then, she said, the MLK Center has provided a welcome focus for program activities and collaboration, and served as an excellent place from which to launch nutrition programs in area schools, job training programs and elsewhere.

Those programs – the Family Nutrition Program, with its programs and activities to help low-income adults and youth establish healthy eating habits and physically active lifestyles; and the Expanded Food & Nutrition Education Program, aimed at improving the nutrition and health of low-income families with young children – have also undergone changes.

Both programs are partially funded by the U.S. Department of Agriculture which, notes Culross, has shifted its nutritional model from an emphasis on the four basic food groups to the Food Pyramid with its proportional prescription for selecting from those groups, now to what is called My Pyramid.

“It’s based on the idea that ‘one size does not fit all,’” said Culross.

As she begins retirement, Culross said she does so with the acute knowledge of how great the need is for the kind of information that Extension nutrition programs are offering in shelters, job training sites, and YMCAs, among other sites. She praises the support the program has received from state, local and grassroots community leaders, including U.S. Representative James McGovern. Many of those leaders, she said, she has known for years, and they will continue to support and advocate on behalf of this valuable work.

Judging by Pat Culross’s gleeful interaction with parents and children at a local Headstart Program recently, it seems likely that she too will continue to be a part of that advocacy.