Seeds from the Past, Success for the Future

At their fourth-generation orchard in Deerfield, Tom, Becky and Ben Clark are helping to preserve far more than apples. Clarkdale Fruit Farms hasn’t changed much in 94 years. That’s the way Tom Clark likes it. His customers, who travel miles for heirloom fruit and small-batch ciders, like it too.

“Some of our apple varieties have been here since my grandfather planted them,” says Tom, pulling the best specimens from a crate for a customer. “Folks come with their children and buy the same types of apples they got here when they were kids themselves.”

Just before Christmas, those customers came in a steady stream to the Deerfield farm’s retail stand, a rambling weathered shed attached to the original 150-year-old barn. Tom and his son Ben know them all. “Don’t we owe you a jug of cider?” Tom calls to one. “You’ve been so good we’ll give you half a gallon of each. That’s your Christmas present.”

Tom’s grandfather, a country general practitioner named Webster Kimball Clark, was taken by the property while treating a patient in the old farmhouse. 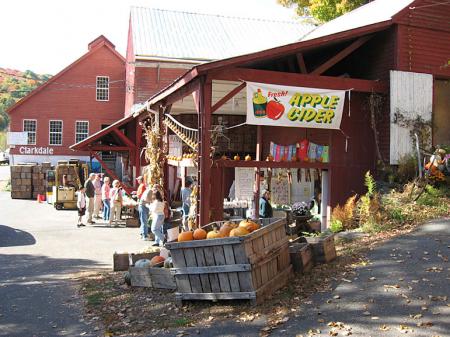 He ended up purchasing ten acres from the man. Today, the Clark family’s rolling fields are home to nearly 60 types of apple and pear trees, over 50 varieties of peach trees planted on a sunny hilltop, and a smattering of grape vines and cherry, nectarine, and plum trees. But while the acreage has grown and the fruit selection diversified, the Clarks have been careful to keep the farm’s soil and spirit intact, a decision that preserves Clarkdale’s character and makes good business sense.

“Staying small has helped us survive,” says Tom. “We don’t have fancy overhead, we didn’t build a new barn on the highway, and we have no full-time employees other than ourselves.” Even the wooden apple crates, some made years ago by Tom himself, are reused season after season, and regular cider-making ensures that any fruit too imperfect to sell won’t go to waste. That renowned cider ties Clarkdale to the past as well, through special vintages like Tom’s single-growth Roxbury Russet, pressed from the first “named” apple in the U.S., originally grown in Roxbury, Massachusetts. As Tom says, “People have been making cider in New England for 300 years. It works.”

Ultimately, of course, the family’s commitment to preservation begins and ends with protecting the land itself. That has meant a long association with UMass Amherst and UMass Extension. Tom’s father, Fred, graduated from “Mass Aggie” in 1934 with a degree in pomology. Tom has taken an active role in providing data for UMass Extension Integrated Pest Management initiatives. He has worked with Extension’s Sonia Schloemann in testing hardy new varieties of table grapes, as well as with Jon Clements in high density planting of apple trees (See In Common, Winter 2007-2008, and Spring 2008.).

“I have always been a solid supporter of Extension,” he notes.

Hands-on caretaking has been critical. “At a big commercial operation, a guy’s going to fill up the sprayer and go at it until he quits,” he explains. “But if you’re smaller, you only do what you really need to do.” That intimacy with the land is hard to come by if you don’t live and breathe where you work, as generations of Clarks have done.

“They say you should be able to walk from your house to everywhere on your farm in half an hour,” says Tom. “To really know your land, you need to watch it at all times, day and night, all year.” In season, that means he’s on the job more often than not. It’s not an easy life, but the rewards are rich enough to have enticed Ben, a recent Wesleyan grad with a degree in theater, to return to the farm and, as Tom puts it, “learn about the other side of 5:00 a.m.”

And what if Ben hadn’t chosen to become the fourth generation of Clarks to enter the world of pomology? “I don’t know what I would have done,” admits Tom. “You wonder, how many years am I going to be here; is it worth planting? You know, the average age of farmers in the U.S. now is nearly 60.” The local food movement is good news to operations like Clarkdale. “People really want to keep the quality and flavor of a small farm,” reflects Tom. “A place where you can come in and sample three different types of cider, try out a Jonagold, or learn which apple’s best for baking. More and more, people tell us, ‘Thanks for being here.’

“Preservation and local food are important,” he adds, “but to tell the truth, I never stopped to think about why I do this. It’s just a way of life, and it so happens it’s the one I grew up with.”

This story originally appeared in the Spring 2009 issue of In Common.