Seeing the Forest for the Tree

Driving along the interstate past miles of rolling green hills, it’s easy to take New England’s forests for granted. But with 70 percent of Massachusetts woodland owned by private families and individuals, the future of our landscape is far from certain. That’s where the Family Forest Research Center and MassWoods come in.

A joint venture between the USDA Forest Service and UMass Amherst’s Department of Environmental Conservation, the Family Forest Research Center (FFRC) is a national organization that studies and works with family forest owners throughout the country. The center’s goal is to better understand the needs and realities of these private forest owners  in order to ensure a future which includes forested landscape and to foster sustainable forest management. Along with administering the annual National Woodland Owner Survey, the official survey of family forest owners in the United States, the FFRC leads projects that study landowners’ characteristics, attitudes, and behaviors—from their position on biomass harvesting to the effect of tax policies on their decision-making process.

So just who are these forest owners? Very likely, they include many of your friends or neighbors. “Family forests tend to be small scale compared to other kinds, such as national, state, or industrial forests,” says UMass Amherst professor and Extension forester Dave Kittredge. In fact, according to the FFRC, “If you have an acre or more of land with trees on at least 10 percent of it, you have a forest.” That’s true whether you have “‘just trees’ that shelter native plants and animals, a bit of ‘woods’ behind your house where the kids play and you cut firewood, or a ‘tree farm’ that earns your family money.”

In all, there are 10 million small forest owners across the U.S., particularly east of the Mississippi, where fewer national and state forests have been established. As more and more of these landowners enter their retirement years, they’re reaching a critical juncture for decisions about maintaining or relinquishing their land—and that could affect us all.

“The average age of landowners is now over 60. It’s an aging demographic,” says Extension assistant professor Paul Catanzaro. “In the next 20 years, they’re going to decide whether to keep their land as forest or sell it and turn it into housing. And these decisions will shape what our landscape will look like.”

Making sure those decisions are well informed is the role of MassWoods, the FFRC’s outreach arm within Massachusetts. “The two biggest questions landowners face are ‘How do I manage my land?’ and ‘What should I do with my land in the future?’” says Catanzaro. “Most landowners know the option of selling off their land, but most don’t know that there are conservation options that can pay them or give them a tax break to keep their land open.”

To make sure that family forest owners have all the facts, Catanzaro and Kittredge oversee a website that includes clickable local maps, links to forestry professionals, and a host of information on everything from finding a local professional, to restoring old-growth characteristics, , to planning the future of your land. This ensures that forest owners can access the information they need when they need it, whether that’s while they’re having their morning coffee or after they’ve put the kids to bed.

Of course, knowing the facts only goes so far: what many families want most when making critical decisions about the land they love is guidance they can trust. The Keystone Project provides just that by linking landowners to people in their own communities who’ve been specially trained to steer their neighbors through the many options they face, such as whether to cut timber or how to keep their land intact for future generations. These specially trained volunteers are known as Keystone Cooperators.  As Catanzaro explains, “We know from research that when landowners need to make decisions they turn to people they know and trust for recommendations.” Together, these Keystone Cooperators—all experienced and influential members of their communities—put in volunteer hours equal to 12 full-time positions each year. “This model really works,” says Catanzaro.

Landowners are often surprised to discover that they may be able to do better financially by keeping their land forested rather than selling, a solution that gives families the satisfaction of preserving their legacy while providing numerous benefits to their communities and society. Possibly the most valuable of these is clean water, according to Catanzaro, but family forests also increase the common good by providing wildlife habitats, carbon sequestration, recreation opportunities, and a backdrop to tourism—all of which suffered during the housing boom of the 1980s and ‘90s, when an average of 40 acres of forest per day was lost to development. “There’s a lot at stake if everyone starts developing their land,” says Kittredge.

That’s especially true in a state like Massachusetts—the nation’s third most densely populated and eighth most forested. As the MassWoods website asserts, “There are few places on earth where so many people live among so many trees!” The result is a state whose overall health is intimately tied to the health of its forests. “The goods and services these forests provide help everybody in the Commonwealth,” says Kittredge. “That makes family woodland owners important people, and worthy of study.”

“Most people love their land for its intangible benefits—privacy, beauty—but most don’t recognize the importance of their little piece in relationship to the whole,” adds Kittredge. “When families sit around the proverbial kitchen table and need to decide what to do because a tuition bill came due, or grandma needs a new hip, or they’re getting into their nineties, we want to make sure they’re able to choose in a meaningful and informed, rather than reactive way. Otherwise someone knocks on their door and offers them $50,000, and they take it.” 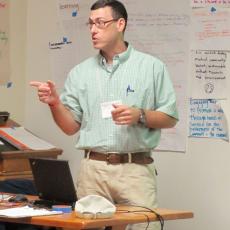