Shining a Light on Dual-Use Solar

Dual-use solar is making waves around Massachusetts, the country, and the globe – and CAFE’s own Clean Energy Extension (CEE) and its partners within UMass Extension and throughout the state are making a difference on two important fronts: helping to advance
dual-use solar research and supporting the state’s solar incentive program.

For those new to the concept, dual-use solar refers to both agricultural production and electricity production from solar photovoltaic (PV) panels occurring together on the same piece of land.
These combined dual-use systems are sometimes also referred to as agrivoltaics, agrisolar, or
co-location of solar and agriculture.

The concept of putting solar and farming together has been around since the 1980s but interest is expanding rapidly, driven by state and local clean energy and climate goals, concerns around food security and farm viability, and a growing interest in diversifying farm revenue sources.

As with any new solar application, farmers and others have questions: What kinds of crops do (and don’t) work well with dual-use solar? What about grazing animals under the panels? Will my equipment fit between the poles supporting the panels? Will shade from the panels affect my soil? How will installing a dual-use system affect my farm’s finances?

CEE and its partners are helping to answer these and other questions in two major ways: (1) facilitating, advancing, and disseminating original dual-use solar research so that farmers, solar developers, policymakers, and the general public are better able to make decisions around this new approach to siting solar energy; and (2) supporting the state’s solar incentive program known as SMART (Solar Massachusetts Renewable Target).

While dual-use solar is gaining attention in various places around the country and the world, many don’t realize that UMass Amherst plays a historic role in the development of the idea.

Gerald Palano, an alternative energy specialist with the Massachusetts Department of Agricultural Resources, explains some of the history: More than 10 years ago, Dave Marley, a UMass Amherst graduate and building contractor, approached Palano with the notion of
co-locating solar and farming. “Dave Marley was interested in solar…but was really interested in keeping farmland open and protected and productive,” says Palano. Marley told him: “There's got to be a way we can do both. And I'm going to try to see if I can make that happen,” Palano remembers. 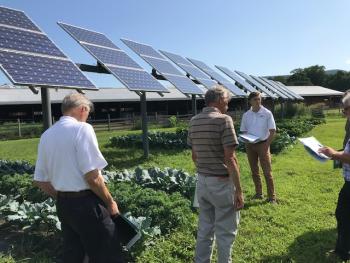 After those early conversations, Marley created a new solar company called Hyperion Systems and brought the dual-use concept to agronomist Stephen Herbert at UMass. Marley passed away in 2013 and his son Jake, managing director at Hyperion Systems, has since helped carry the work forward. “My dad started working with UMass Amherst in 2009 and started meeting with Stephen Herbert,” remembers Jake. “They created a wooden structure [that simulated elevated solar panels] and started analyzing the shading impacts [on the ground below the panels]. That was done in a parking lot, just testing the sunlight difference.”
The results of that early work led to a 2010 research proposal directed to the U.S. Department of Energy’s (DOE) National Renewable Energy Laboratory. Funding was awarded and led to the 2011 construction of the nation’s first dual-use research array at the UMass Crop and Animal Research and Education Farm in South Deerfield.

Research at the site continues to this day and serves as a foundation for additional research sites and projects around the state and country, including right here at UMass. Building on this early success, DOE announced in 2020 a $1.8 million award to a multi-partner dual-use research team led by Dwayne Breger, director of CEE and extension professor of environmental conservation. The three-year project, which launched in late 2021, brings together a range of partners within and outside of UMass, several commercial solar developers, state agencies, and farm research sites across the state to investigate dual-use solar questions related to crop productivity, soil health, and economics.

When carefully designed and sited, dual-use solar can support and generate revenue for a farm from the sale of the power generated by the panels, in addition to allowing the farm to continue to earn revenue from its agricultural activities. To better understand the full breadth of the implications of dual-use development, the research team is looking at soil health and crop productivity, as well as modeling the economic trade-offs of dual-use solar development on both an individual farm level and on the broader agricultural economy in Massachusetts and across New England.

Another aspect of the economic research will examine how the cost of on-farm labor is affected by the siting of dual-use solar on working farm fields. “My understanding is that the research is going to try to account for everything that goes into making those products work on the farm. Is there additional labor? Are panels in the way compared to a wide-open field, how much more labor did that involve?” says Palano.

Breger predicts that when the researchers conclude their economic analysis, it will show that labor costs are a factor farmers need to account for when deciding whether or not they wish to adopt dual-use. “There's going to be impacts also on the farming itself, in terms of the cost of the farming. [For example,] tractors and equipment need to be a little bit more cautious and careful as they're going about their business in the fields, which translates to probably a little bit more time and effort,” Breger says. “And that is a cost to the farmer.”

Jill Fitzsimmons, research assistant professor of resource economics at UMass, specializes in behavioral economics and industrial organization and is at the forefront of CEE’s efforts to estimate economic trade-offs associated with dual-use. Fitzsimmons agrees that labor costs are a factor that researchers are examining closely. “My role as a researcher is to be agnostic about whether dual-use is a net benefit to farmers or the general public” Fitzsimmons emphasizes, and adds that UMass, as a land-grant research institution, “is well positioned to test this technology first, and provide farmers with tools they can use to decide whether dual-use is likely to be a net-benefit for their operation” before farmers take any bets on it.

While the research findings will be useful for growers in the Northeast, dual-use knowledge will not easily translate from one region of the country to another, since regions have different soil and climate conditions. Palano from MDAR explains: “When you talk about the Southwest, for instance Arizona, they're looking at designing their dual-use systems to keep shade on their crops during the middle of the day. Where we [in the Northeast] want as much sunlight as we can get, they've got a whole different perspective.”
The research program is in its early stages and is currently experiencing its first growing season. While it’s unclear what exactly the research will uncover, the hope is that the results will help reveal the forms, applications, and designs of dual-use solar that are valuable for farmers, the agricultural economy, and the public at large.

In addition to conducting ground-breaking research on dual-use solar, UMass Extension programs are supporting dual-use in another important way: By lending their energy and agricultural expertise to prospective projects hoping to qualify for the state’s solar incentive program. First, a bit more history: As dual-use research at UMass gained momentum over the past decade, state policymakers took note of dual-use’s potential to address growing public concerns related to potential conflicts between solar development and the state’s food production capacity. These conversations with state agencies such as MDAR and other experts led to the inclusion of a dual-use solar incentive in the 2018 Solar Massachusetts Renewable Target (SMART) program developed by the Massachusetts Department of Energy Resources (DOER).

“SMART is basically a series of policies that support and incentivize, and in some cases disincentivize, certain kinds of solar development,” says River Strong, associate director of UMass Clean Energy Extension. “Qualifying dual-use projects receive an additional six cents per kilowatt hour above the base compensation rate.”

“Project applicants hoping to receive the incentive are required to submit what’s called a draft
pre-determination application that includes information about the dual-use system and the host farm,” Strong says. CEE and UMass Extension Agriculture Program colleagues then work together to review and comment on the draft applications, which include information related to the design and location of the solar system, as well as a plan for how the farm operations and solar are going to work together to best meet the program requirements such as shading levels and minimum panel height. While applicants are required to engage with UMass Extension as a first step, they submit their final applications to DOER, which – in coordination with MDAR – ultimately decides whether the project will qualify for the incentive.

Strong says that CEE staff and their Extension Agriculture colleagues strive for a collaborative relationship with applicants. “We're playing an advisory role to the applicants, and our goal is to support them, and to help them strengthen their applications,” he says. “We work collaboratively with the applicants and sometimes visit the proposed project sites to talk further and answer questions. Once they receive our written comments, applicants are welcome to integrate any, all, or none of our feedback. They’re also free to revise and re-submit their applications to us and have a back-and-forth as many times as they like.”

Spreading the Word on Dual-Use Solar

Between its research programs and support for SMART, UMass Extension’s overall goal is to provide a public service by developing and disseminating information to interested farmers, solar developers, other research groups, state agencies and policymakers, and the interested public. The hope is that this information will give these audiences a solid foundation for making well-informed decisions around this emerging technology. All of this dual-use solar information is finding its way onto CEE’s dual-use solar web pages in the form of factsheets, photos, research results, and other resources.
Dwayne Breger provides further details on CEE’s intended audiences: “We're really keen on moving this information out to the broader public. And I guess I would divide that into maybe two primary camps,” he says. “One is the farm community itself…the farmers who have to make decisions when they're approached by or reach out to solar developers. [The research will fill] in some of the gaps in terms of how different types of crops work and perform, and the key array designs that can help to assure good farm productivity. The outreach will be done in the form of information sheets and fact sheets and direct presentations to farmers interested in this topic. And then I would say the other audience that's really keen on this information is the policy audience of our own state and quite a few other states.”

Dual-use solar has great potential to allow farmers to sustain their farms and continue producing food locally, while also helping Massachusetts reach its clean energy goals. But this technology brings with it inherent unknowns, and potential economic risks. Like any new technology,
dual-use solar is likely not a “silver bullet” solution but an evolving technology, one ripe for robust research and clear communication from objective sources like UMass Extension.

Gerald Palano believes collaboration like that exhibited by UMass Extension and its many research partners is key to the future of clean energy in Massachusetts. “It takes a community to build these projects, and the more that we're engaged with other agencies, in other departments, universities, etc. – the more successful we are all going to be.”