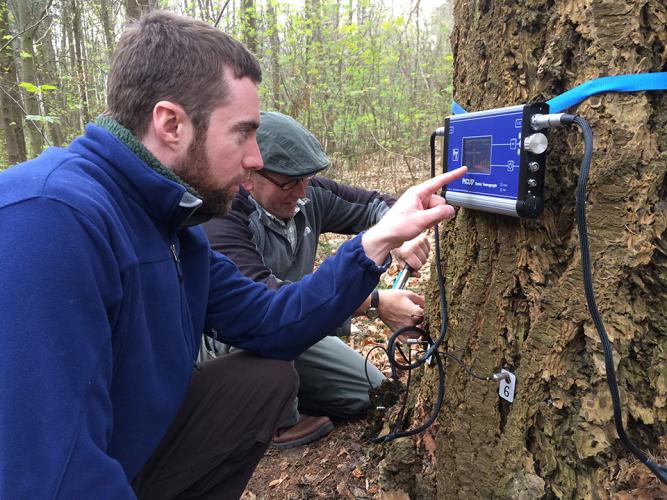 Tomography: A Tool to Read Trees That Predict the Future

Nick Brazee is a kind of modern day Superman, specifically the x-ray vision part.  Brazee is an Extension plant pathologist at the UMass Plant Diagnostic Laboratory who has worked extensively with wood-decaying fungal pathogens in forests during his career.  Using specialized tomography equipment, he can now “see” inside tree trunks to quantify the volume of internal decay in living trees. (Tomography is “a technique for displaying a representation of a cross section of a human body or other solid object using X-rays or ultrasound.”)

Along with collaborators Dr. Robert Marra, forest pathologist at the Connecticut Agricultural Experiment Station in New Haven, and Dr. Shawn Fraver, assistant professor in the School of Forest Resources at the University of Maine, Brazee is part of a project team that is hoping to answer questions related to climate change and disturbance in forests.

The title of their project, “Quantifying Internal Decay and Carbon Loss in Living Trees,” received funding from the National Science Foundation's EAGER program (early concept grants for exploratory research). The specific project now underway is taking place at Great Mountain Forest (GMF) in Norfolk, Conn. [http://www.greatmountainforest.org/]. GMF is a privately-owned, 7,000-acre forest with a conservation mandate that dates back to the early 1900s. Its executive director, Dr. Paul Barten, is an associate professor in the Department of Environmental Conservation at UMass Amherst. They see this project as the first phase—a means to an end, not an end in itself—of a research goal: namely, to study the role played by internal decay in living trees as it relates to forest ecosystems. 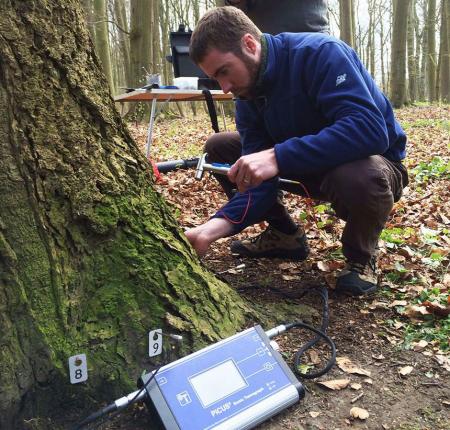 The overall objective of this project is to develop, through testing and validation, a novel approach to the nondestructive quantification of internal decay (both extent and rate) in living trees.  Using a northern hardwood forest, they will focus this study on the three principal northern hardwood species—sugar maple (Acer saccharum), yellow birch (Betula alleghaniensis), and American beech (Fagus grandifolia)— chosen because of their predominance in late-successional stands of the Northeast, and because of their susceptibility to decay by a range of fungal species.

The primary research questions these collaborators are undertaking include: can we non-destructively quantify the volume of internal decay in living trees, with a high degree of accuracy, using sonic and electrical impedance tomography? Next, can the tomographic data be correlated to the actual carbon lost through the process of wood-decay by fungal pathogens? Sonic and electrical impedance tomography is an accurate, powerful tool that can be used to assess the internal structure of living trees. While it has been used by arborists for over a decade, the technology has not been utilized to answer the questions they are posing in this study. By sampling multiple cross-sections on the lower trunk, they can create a three-dimensional image of the tree's internal structure to determine the incidence and volume of internal decay. The data is presented in real-time, allowing for an immediate determination of whether a tree trunk is healthy or decayed.

The results have wide-ranging implications for urban forest management, preservation of historically and culturally significant trees, and understanding natural disturbance dynamics in forest ecosystems. However, this proof-of-concept study is particularly focused on carbon sequestration, a critical issue that is shaping regional and national forest management plans. As ecologists and foresters seek to maximize carbon sequestration in forests, in an attempt to reduce the abundance of this greenhouse gas in our atmosphere, they believe there is an overestimation of the amount of carbon captured by forest trees. These overestimations occur because ecologists are not compensating for internal decay that routinely occurs in living trees into their models. As trees age, they can often harbor large volumes of internal rot, and there are numerous wood-decay fungi that attack trees and shrubs in the environment. If the tomographic data can accurately determine the amount of carbon lost in decaying trees, this technology could be used to refine carbon sequestration models, providing for more refined estimates of total forest carbon stocks.

Carbon sequestration in forest ecosystems is a critically important component of efforts to mitigate the effects of rising atmospheric CO2 concentrations.

Two student interns, one from the Stockbridge School of Agriculture (University of Massachusetts Amherst), will be trained in techniques including field mycology, forest pathology, dendrochronology, sonic and electrical impedance tomography, as well as classic forestry skills. By participating in this research project, these students will improve and enhance their forestry skills, and gain exposure to research that will directly impact their understanding of forest processes.

The approach they propose has the potential to transform studies addressing the dynamics of forests, and will facilitate a major advancement in the largely unexplored science of internal decay in living trees. This approach will be the first of its kind to attempt an accurate and nondestructive estimate of the extent and rate of internal decay in living trees, two important metrics now missing from models that assess the role of forests in C sequestration.

Results from this project will be used to promote among the lay public a broader understanding of the complex dynamics of the forest, and its role in mitigating climate change, through the numerous established interfaces that these researchers have with their constituency, including public outreach venues such as science museums, schools, and public events. 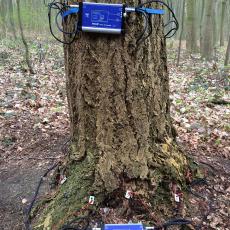 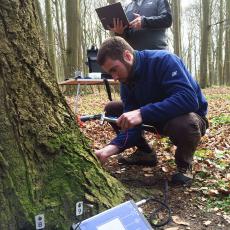