How UMass Amherst Scientists Are Beating a Recalcitrant Fungus at Its Own Game
September 25, 2012

Called “dollar spot,” the fungus-based disease is the most economically damaging one on golf courses nationwide, as well as one of the most difficult to control, according to Jung. Traditionally, superintendents rotate spraying their turf with any of the five classes of fungicides known to battle dollar spot, hoping that one will do the trick. The problem is that dollar spot has adapted: in other words, 99 percent of the fungus may be destroyed, but the genetically hardier 1 percent that remains goes on to reproduce, creating an increasingly resistant population—an effect similar to that of antibiotics in humans.

Halting the indiscriminate use of fungicides is clearly key, but the best way to do so is elusive. Which chemicals are actually working, and which ones have lost their effectiveness? The answer varies course by course, depending on past application and other factors. “So far, figuring out how effective our chemicals are has just been anecdotal,” says Michael Stachowicz, green and grounds manager at the Dedham Country and Polo Club. “Sometimes environmental effects make it hard to decide on the effectiveness. Maybe it rains the next day, giving the disease a boost, or there’s a change in the humidity or temperature and suddenly the disease isn’t as strong as it was.”

That’s where Jung’s lab comes in. Based on extensive conversations with golf course superintendents in the area and after over 10 years of field research experience, Jung developed a protocol for collecting turf samples and testing them in a controlled setting to determine exactly which chemicals curtail fungal growth on a particular course. Unlike comparable lab assays, which use only one or two samples, Jung uses fifty per course—what he calls the “magic number” for accurate analysis. The lab then provides recommendations to courses for optimal spraying rotations and nonchemical ways to beat dollar spot. This targeted approach results in chemical applications that last two or three times longer, a savings for both the environment and the bottom line.

In fact, superintendents report, the $500 assay more than pays for itself almost immediately. “I make that up in the first application where I’m not wasting a chemical that this fungus is resistant to,” says Stachowicz. Over the course of a year, that could mean savings of up to $20,000 per course. Fees for the test are kept low thanks to a funding partnership between Jung’s lab, area chemical companies and the New England Regional Turfgrass Foundation.

Partnerships like these may be unusual, but they’re central to what Jung sees as the university’s role. “When Geunhwa came to UMass Amherst, he didn’t come in and say, ‘This is what I’m researching,’” says Extension educator and specialist Mary Owen. “Instead, he talked to professionals in the field to find out what their major problems were and framed his research around that. It’s exactly what a land-grant university should be doing.”

Plans are underway to expand the university-industry partnership: Jung is currently working with chemical companies to develop a self-diagnostic detection kit that superintendents can use right on site to follow up on their assay results for the long term. This ease of use is critical for busy superintendents.

“If I had realized how easy it would be to just make a phone call and have someone from the university come out the next day, I would have done it a lot sooner,” says Stachowicz. Sampling for the assay takes a half hour, and lab results are delivered within two weeks. Now Stachowicz is making sure more superintendents are in the know, through blog posts and word of mouth.

“Superintendents are telling other superintendents that this is working,” says Owen. “They can see it right on their golf courses, not just in a lab.”

As for Stachowicz, he’s already tailored his planning and purchasing for next season around his results. “Now that I know what to cut out because of ineffectiveness and what to add to the mix, I can extend the life of the effective chemicals and save time, effort and money by not using the ones that aren’t working on dollar spot,” he says. “My program just got a lot more efficient.”

So what’s next for the Jung lab? Currently, research associate James Popko and postdoc Jon Hulvey from Dr. Jung’s lab are working to put together an even more efficient and accurate diagnostic test for fungicide resistance using modern genetic techniques. A recent research publication in the September issue of the journal Applied and Environmental Microbiology, authored by Hulvey et al., is one of the first reports of a genetic mechanism for fungicide resistance in a turf grass pathogen. The information from this research is being used to develop techniques for determining which fungicides will work in the field using the genetic signature of resistance found in the DNA of the fungus causing dollar spot. As Dr. Hulvey states, “Modern medicine can benefit from a personalized medicine approach, which utilizes genetics of patients to determine which medicines can work best, and we feel the same can be done for agricultural crops and fungicide resistance.” 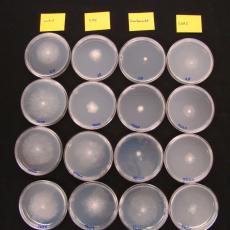 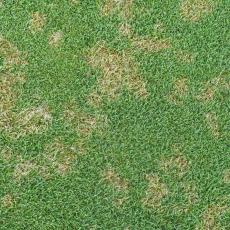 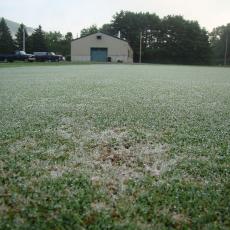