Water Wisdom from the Ground Up

If you happen to live in Duxbury, you might want to think twice about watering your lawn tonight. There are, after all, voluntary restrictions on unnecessary water use. Then again, you could be up in Chelmsford or out in Shrewsbury. There the restrictions are mandatory.

In fact, in spite of slightly above average rain fall in June, more than 60 Massachusetts communities had water use restrictions in place as of July 1, 2008.

Local water supply uncertainties and rapidly increasing demand, along with the prospect of climate change, have reminded us all that the availability of safe and sufficient water has as much to do with the way we use and protect it as it does with shifting weather patterns and whims of Mother Nature.

When it comes to water usage, agriculture is an area of the economy that has a real impact. All agricultural activity – including growing traditional food crops – puts demands on water supplies. However, part of the impact results from sectors like turf, landscaping, and recreational livestock in a state like Massachusetts where there are an estimated 350 golf courses, and horses outnumber cows. 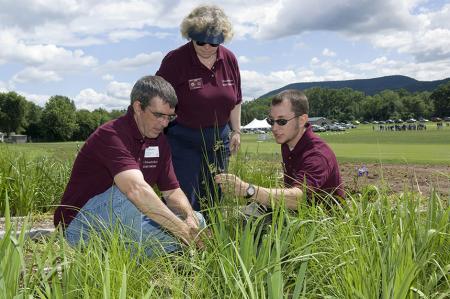 All of Extension’s agricultural teams deal with mitigating pressures on water supplies. However, Mary Owen, who leads the Extension Turf Team, and Masoud Hashemi of the Crop, Dairy and Livestock Team are, in their very different ways, at the forefront of UMass Amherst research and outreach aimed at making sure that the quality and abundance of the state’s groundwater supplies are not jeopardized by its long tradition of beautiful turf and abundant livestock.

In a segment filmed in January and aired nationally in March, Owen talked about how to select the right kind of grass for a residential lawn. Illustrating her points with a variety of grasses grown in the French Hall greenhouse at UMass Amherst, Owen explained that every variety of grass has a personality, and each requires a different setting and care.

“There are hundreds of kinds of grasses,” Owen said, adding that six or seven are used here in New England. “There is a big need at the level of the home-owner for basic information.”

Owen works with UMass Amherst colleagues from the university’s Department of Plant, Soil and Insect Sciences at the Joseph Troll Turf Research Center in South Deerfield disseminating information on new methods to mitigate water use. Some of those efforts were presented at the annual Turf Research Field Day in mid June.

Professor Michelle DaCosta displayed a “rain-out shelter” that resembles a moving greenhouse to study ways to increase water efficiency by turf. By moving the shelter across a field, she can keep certain swaths of turf out of the rain for measureable periods of time.

Extension’s Masoud Hashemi approaches water conservation from another angle: below ground. That’s where nitrates from livestock manure end up when farms are not properly managed, he notes. At “twilight meetings” held around the state, Hashemi shows how to appropriately manage manure and fertilizer while protecting water at the same time.

He says there are about ten pounds of nitrogen in every ton of cow manure. While nitrate is a key element in fertilizer, it becomes a contaminant when it gets into the water table in high concentrations. Run-off from manure also contains phosphorus, which can contaminate surface water, turning nearby ponds green and killing wildlife.

The state’s boom in horse ownership has aggravated the problem, according to Hashemi, and it doesn’t take a lot of horses to create a lot of manure, a lot of contamination potential, and a lot of problems for horse owners.

“Sometimes, they don’t know how to manage the manure,” Hashemi said. “After a couple of years horse owners have a big pile of manure in the back yard and they don’t know what to do with it.”

At the same time, however, many farmers buy nitrogen fertilizer, which currently costs about 75 cents a pound and has doubled in price over the last three years. If a farmer spreads 180 pounds of nitrogen per acre the money all comes out of pocket. In many cases, however, the alternative is in the farmer’s own back yard.

Hashemi instructs farmers and horse owners to pasture their animals to increase their sustainability by lowering costs of production including fossil fuels and purchased fertilizer.

“As fertilizer, it won’t contaminate. It’s a win-win,” he said.

This story originally appeared in the Fall 2008 issue of In Common.