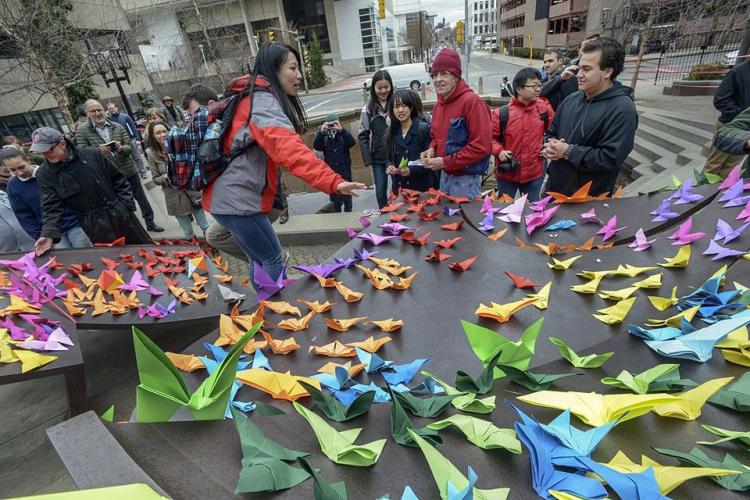 Young Energy for an Older City

Students and faculty from UMass Amherst have become welcome partners in the work of effective planning for Massachusetts’ third largest city. Through collaboration between the UMass Amherst Design Center in Springfield, Massachusetts and that city’s Planning Department, students from the University twenty miles to the north have been actively creating opportunities for citizen engagement and innovation.

Michael DiPasquale, Design Center director and extension assistant professor in the Department of Landscape Architecture and Regional Planning (LARP), coordinates students’ experiences.  In his view, “Students gain valuable skills as they learn about real world situations--working in what is termed, ‘Legacy Cities.’ These are those once-great American cities that formed the backbone of the country, and served as the entry point for immigrants wanting to be part of a more prosperous middle class.”

DiPasquale’s undergraduate and graduate courses all require students to spend a fair amount of time in Springfield as they involve themselves in projects. Introduction to Urban Design, a mix of undergraduate and graduate students, is taught by DiPasquale while a second offering, Graduate Urban Design Studio (co-led by DiPasquale in collaboration with Design Center colleague, Professor Frank Sleegers), provides graduate students with valuable underpinnings as they work directly with Springfield’s principal planner, Scott Hanson.

Hanson reflects, “We have hosted LARP students in Springfield for well over a decade for various projects. From the city side, it is exciting for us as we get fresh sets of eyes from students eager to learn what is going on in the city. For example, a project in Forest Park involved several public meetings with residents. This provided valuable experiences for students and we have been able to implement some of their good suggestions. When they come to Springfield, they are able to explore actual issues and concerns that planners deal with every day. Recently, they have been involved with envisioning revitalization projects in areas of need.  One great example is the area that suffered from a gas explosion a few years ago. Students are able to look at parcels such as this, meet with stakeholders and, through a substantial visioning process, begin filling in ideas that meet our changing needs.”

The first week of classes, Hanson meets with graduate students, some of them visiting the city for the first time. He works with professors and students in a studio process as they tour specific sites and then review their work throughout the semester. DiPasquale believes this two-way experience is great for his students. “We very much appreciate the time and energy the City of Springfield give to our students. Such direct involvement and critical feedback prepares them to graduate with greater self-confidence and real world knowledge,” said DiPasquale.

Emilie Jordao, a third-year master’s student in landscape architecture, agrees. She notes, "The urban studio is one of the most meaningful learning experiences I have had to date. The opportunity to envision, create and install a project in Springfield allowed for crucial applied knowledge and offered us valuable networking opportunities. Working with the Springfield Central Cultural District, my group reached out to local organizations, stakeholders and local businesses. We also learned, first-hand, from local students and residents their opinions, likes and dislikes about Springfield. Taking their opinions into account, we worked together to witness their ideas flourish.”  Jordao found that listening to the local population to learn about their needs is a crucial first step in developing meaningful designs and landscapes. 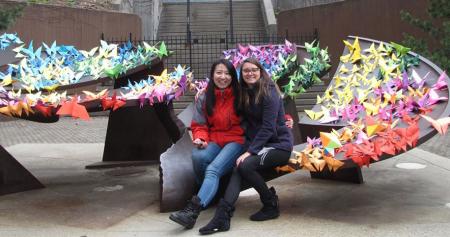 Jing Wang’s team used colorful origamis and red ribbon curtain to draw people’s attention to two sites that had lost their vibrancy.  She observed, “During the process, we connected with Putnam Vocational High School’s after-school program and engaged young students and their families in design. This result was not only active participation but it resulted in side-benefits that had positive influences on their families.”

Kellie Fenton is pursuing a dual master’s degree in landscape architecture and regional planning. Her team focused on water and the ways that it could be harnessed more effectively in the environment.  Kellie remarked, “We proposed collecting water from rooftops and using it to create urban wetlands, green walls and parking lot gardens. These design solutions enhance the local ecosystem and provided a more pleasant urban environment for Springfield's residents and visitors.  Mass Mutual Center allowed a short- term exhibit to be installed that educated and engaged passersby. Through this studio, I learned how important it is that design be a response to people and the environment.  The opportunity to communicate with the general public about our goals and how our designs would benefit the people and city of Springfield was constructive.”

Upon graduation, many students find employment at various jobs directly related to their new-found education.  Some graduates work at private urban design firms, landscape architecture firms or urban planning firms. Others become transportation planners and work in a range of sustainable-design related fields.

Frank Sleegers wants his classroom to extend outward from UMass Amherst campus. “For these students, it’s not just making a grade, they really care about what they do; they interact with residents and see their work is having an impact,” said the urban design professor.

Six installations were displayed throughout the central business district in Springfield using what Sleegers calls ‘tactical urbanism.’ This is an emerging form of urban design that seeks to enliven cities with temporary interventions that are inexpensive and easy to install.

Materials ranged from paper origami and colored ribbons to lighted signs and potted plants, all intended to draw attention to urban spaces that are underutilized in Springfield. These spaces also have significant potential to be used more actively by residents, entrepreneurs or visitors. “For instance, origami for Pynchon Plaza [a long-overlooked pocket park in downtown] was created in collaboration with ninth grade students from the Putnam Vocational High School. We were very proud that our students made the initiative and reached out to the school. Origami were produced in the classroom and brought out with self-written messages. Visitors were encouraged to take the origami and messages home. High school students learned that small changes can make their city more human and friendly, and that they personally can make a tangible impact. It is important that urban places are maintained and cared for. Residents found that their voices can be part of the transformation, thereby empowering the next generation,” Sleegers remarked.

The reopening of Pynchon Plaza represents a success that can be rightfully claimed by Sleeger’s Urban Design Studio. For many years it had been completely fenced off. Through public meetings, residents and downtown stakeholders were able to amplify their concerns. Funds--some from private donors--were secured and two months later the fence was taken down and the plaza was cleaned up and replanted.

Sleegers is justifiably proud of the contributions his students make. “We are always seeking ways to bring higher visibility to our projects. For example, the use of a ribbon curtain over an alleyway created a distinct sensual experience for pedestrians. I think we need to emphasize that people appreciate beauty and creativity… My role is to raise student’s awareness for the overlooked potential of urban spaces. Much of our urban environment is just like a canvas that is waiting for change. I like to encourage them to look carefully at the existing framework and interpret it, rather than completely bulldoze and build new.”

DiPasquale agrees and is pleased with the high quality work of the UMass students. Like Sleegers, he is especially delighted that specific suggestions made by students are moving forward. A new downtown wayfinding system is underway (with the help of Yanhua Lu, a UMass student) and new traffic configurations and public space designs are being constructed in the city’s “X” neighborhood.  A new “Tactical Urbanism” project will soon be started in Stearns Square to help enliven the underused public space. DiPasquale stated, “Offering a platform that fuses new ideas with public input all led by engaged university students is helping to invigorate a city as it reinvents itself.”

The UMass Amherst Design Center-- which opened in Court Square in 2010 as a collaboration among UMass programs in Landscape Architecture and Regional Planning, Architecture and Design, UMass Extension/Center for Agriculture, Food and the Environment and the City of Springfield -- is now housed in the UMass Center at Springfield, located in Tower Square. Support for DiPasquale’s substantial role in the Design Center continues to come from the Center for Agriculture, Food and the Environment and its UMass Extension and Massachusetts Agricultural Experiment Station units. 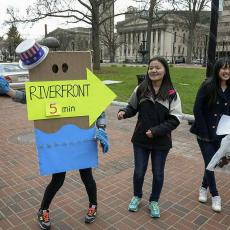 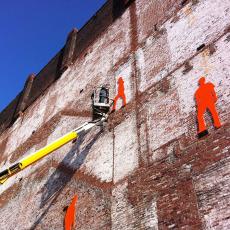 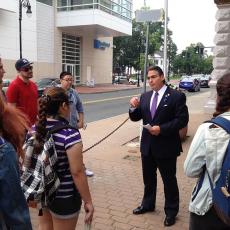 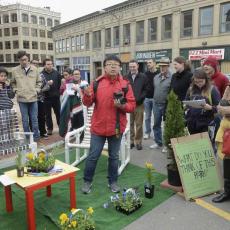 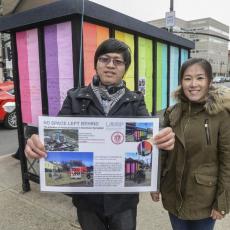 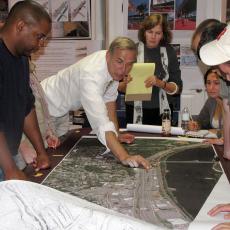