Padilla is a PhD student in the Department of Environmental Conservation at the University of Massachusetts Amherst.  Why is he interested in salamanders?

Working with his PhD advisor, assistant professor Christopher Sutherland, Padilla is exploring methods to monitor the red-backed salamander as a forest indicator species. He explains, “As the human population continues to grow, more of the landscape will be impacted by the footprint of human development, urbanization, and agriculture. With this in mind it is vital that we develop an understanding of specifically how ecosystems are affected, and what we can do to reduce negative impacts.”

Path to a Science Career 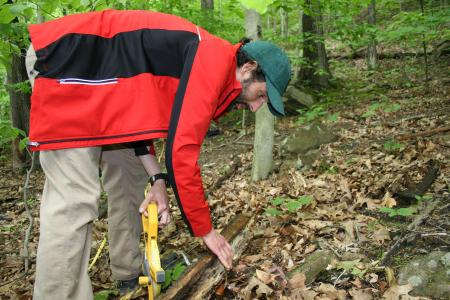 Ben Padilla has the comfortable stride of a hiker who seems born to be an environmentalist. Growing up in Haverhill, Mass., he was a frequent visitor to forests near his home where he kicked over logs to look for frogs, turtles and salamanders.  Often, reptiles and amphibians found shelter in his bedroom at home.  (Apparently his mother is a good sport; she took care of one of his king snakes for over two years.)  After netting two Master’s degrees, one in science from Ohio State University (2012) and the other in education from UMass Amherst (2015), he taught ninth grade science at Renaissance High School in Springfield. As part of a research lesson on water quality, he invited David Bloniarz, UMass adjunct faculty in the Department of Environmental Conservation, to discuss the ReGreen Springfield project (an effort to promote reforestation after the highly-destructive tornado of 2011) and to offer an environmental lesson by the brook.  This turned out to be a fortuitous request since Bloniarz then introduced Padilla to Sutherland. This led directly to Padilla’s interest in a doctoral program in environmental conservation where he is now enrolled in his second year. Salamanders are the reason Padilla is an ecologist and his doctoral research will test out a hypothesis: he wants to learn if there are recent changes in salamander populations and if they can be directly connected to land use changes or the effects of climate change.

Environmentalists, it seems, are always on the lookout for ecosystem changes that can reveal warning signs.  Over the last few decades, there has been ample documentation of melting glaciers with sea level rises, along with record flooding and drought. Changes in forests may offer similar warnings. Melissa Ocana, UMass Climate Adaptation Educator, explains, “researchers anticipate many changes in forest systems as a result of climate change – from the spread of invasive species, pests and disease, to changing snow cover and tree species composition. Changes in wildlife species are likely as they adjust their distributions to match shifting conditions and track changing habitat. But, it’s difficult to know exactly what will happen. Better monitoring is key to understanding how climate change is impacting forests, along with monitoring the status of key wildlife species.”

Ben Padilla explains that red-backed salamanders represent a fundamental element of forest ecology and that stressors will result in changes to forest ecosystems. Padilla has taken on the challenge of adding to the base of knowledge by monitoring red-backed salamanders to determine if, and when, their population shows evidence of decline.  He adds, “The ways forests change as a result of urbanization are similar to how forests are expected to change due to climate change – things like less snow cover over winter, dryer more compact soil, and less woody debris and leaf litter.” He adds, “In fact, these more urban and suburban sites could be thought of as proxies for more rural sites in future climate scenarios.”

Padilla is collecting data from 42 sites in western Massachusetts to assess forest condition and look for variations in forest ecosystems. To document ecosystem impacts, Padilla is monitoring a number of intertwined components at each site. These include: bird diversity, red-backed salamander abundance, soil/leaf-litter invertebrates, and forest vegetation.

Scott Jackson, extension associate professor of environmental conservation, became interested in the life of salamanders in his early days of research. He says, “Red-backed salamanders (Plethodon cinereus) are an important component of forest ecosystems because of their abundance, the immense amount of biomass involved, and their role in the forest as both predators and prey. They might be an ideal indicator of ecosystem health and whether or not they are is a hypothesis, not yet a conclusion. Ben is working hard on this premise.”

In 1975, a surprising discovery came to light in a salamander study at Hubbard Brook Experimental Forest in New Hampshire.  The researchers reported the biomass of salamanders at Hubbard Brook was greater than that of any other vertebrate, including birds.  For the first time, this research showed just how abundant these little salamanders were, and given these large quantities, the vital role they likely played in the ecosystem.

Subsequent research has found the 1975 abundance estimates to be much too low. In fact, a 2014 University of Missouri study found two to four times more salamanders in a forested area. That study also compared studies across the United States and found that estimates of salamander abundance ten times higher than the 1975 estimates. The sheer number of salamanders per woodland meter makes them forest heavyweights.

A large collaborative network, Salamander Population and Adaptation Research Collaboration Network (Sparcnet), focuses on developing much-needed field protocols. Sutherland commented on Ben Padilla’s work, saying “Ben is taking sampling one step further and noting how variation in numbers in an area changes from completely forested to urban areas. This extends the reach of Sparcnet by asking how salamander densities change across a gradient (the landscape gradient measures changes in land use and land cover across space).

“A standing hypothesis exists that there are lots of salamanders everywhere we look. But Ben is finding that with a gradient of human influence (urban vs. rural), we actually find a difference in how many there are in a given space.”
Since they are moisture-seeking critters, from late February through November salamanders are readily found under logs or in leaf litter. When it is too dry and draughty or cold with no moisture, they will go underground.  These little amphibians are highly-responsive to soil temperature and have a strong need for a wet environment.

Red-backed salamanders belong to the Plethodontidae family, as do five out of the eleven types of salamanders in Massachusetts. Like the other members of its family, red-backed salamanders are lungless and they breathe through their skin, which is why they are dependent upon moisture. Unlike most amphibians, they do not begin life in a larval (tadpole) stage, and do not breed in vernal pools, rather, red-backed salamanders lay eggs on land which hatch into fully-formed miniature replicas of the adults. Because they are able to regrow their tails, salamanders are important models for human medical research. They are quite common and can be found in a large range on the east coast from southern Quebec to the Appalachian Mountains and deeper into southern United States. Redbacks are small, like a long narrow tube with squirmy legs.

Can salamanders help us understand the health of forest ecosystems, especially when under stress? That’s what Ben Padilla is working to understand. In 1869, visionary John Muir said, "When we try to pick out anything by itself we find that it is bound fast by a thousand invisible cords that cannot be broken, to everything in the universe." Certainly applies to redbacks.

Professor Jackson explains the importance of Padilla’s research: “We need better methods for monitoring salamander populations so that we can detect problems before it is too late. We don’t know if red-backed salamanders are particularly vulnerable to climate change or urbanization. However, if their numbers started a serious decline, that would be a big deal.”  He explained that spring peepers are another widespread and ubiquitous amphibian species in the Northeastern U.S. However, unlike red-backs, if peeper populations started to decline we'd know it, because of how vocal they are. People would be commenting about how they just don't hear peepers like they used to. It is much more difficult to monitor red-backed salamander populations and there is a danger that a significant decline might not be recognized until it is too late to do anything about it.