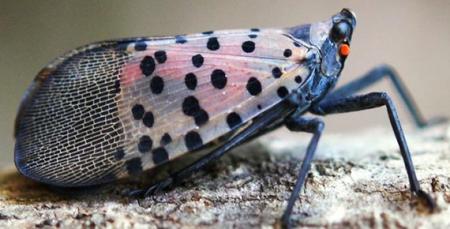 Spotted Lanternfly (SLF), Lycorma delicatula, an invasive insect native to Asia, was first detected in the United States in 2014, in southeastern Pennsylvania. This highly destructive pest has spread rapidly across the northeastern region of the United States. SLF has the potential to cause catastrophic damage to Massachusetts agricultural and horticultural industries, as well as lasting negative impacts on the environment.  Update on SLF: July 23, 2021
Your next question might logically be: has it arrived in Massachusetts yet? Yes, but it is not yet considered to be established in our landscapes.

Joanne Klein, state pest survey coordinator at Massachusetts Department of Agricultural Resources (MDAR), reports that, ”In 2020 Mass. had 12 towns (in eight counties) with dead adult Spotted Lanternfly and/or egg masses found on goods or materials shipped in from states with active infestations. In addition, there was a sighting of one live adult SLF in Billerica, Mass. MDAR followed up by setting a SLF-specific trap and did catch one adult SLF in that trap in October 2020.”

What are next steps to stop the spread in the Commonwealth? A team of University of Massachusetts professionals in UMass Extension’s Landscape, Nursery and Urban Forestry Program, Extension’s Fruit Program, Stockbridge School of Agriculture, and the Department of Environmental Conservation are undertaking a nine-month integrated research and extension project to develop effective tools to fight this pest. This January, they are identifying high-risk sites throughout the state working with fruit growers, tree farm and nursery managers, and commercial horticulture professionals, all of whom would be severely affected by the presence of established colonies of the SLF.

During the spring and summer of 2021, the goals of this project are to identify novel attractants (effective lures and traps), and to provide public education about SLF through Extension and other outreach. This project also has the potential to lead to the first detection of an established SLF population in Massachusetts. That information would be highly valuable to researchers, stakeholders, regulatory officials, and others following the changing distribution of SLF in the Northeast.  Tawny Simisky, UMass Extension entomologist, says, “In the long term, this research and extension project will build new relationships between researchers and Extension professionals at the University of Massachusetts, MDAR, and the USDA, and lead to the identification of trap methods that could be used nationally to slow the spread of SLF.”

The researchers associated with this project (Joe Elkinton, Jeremy Andersen and Jaime Pinero) will be working with Miriam Cooperband of the USDA/APHIS lab on Cape Cod to identify and evaluate airborne attractants that can improve the ability to detect SLF. Dr. Cooperband has identified several attractant lures released from host plants of SLF. She is currently working on pheromones produced by SLF that may be much more attractive. The UMass team will help her conduct field tests of these new lures.

While New Englanders look forward to late summer and early fall when cherries, peaches, apples and grapes are readily available, Spotted Lanternfly is a major threat to these food crops.

Do not be fooled by the beauty of the adult with its distinctive pattern of checkered and spotted wings tinged with black, white and peach colors. SLF is the proverbial wolf in sheep’s clothing, it is highly destructive. SLF feeds on and damages many plants, including those important to the economy such as grapevines, hops, hardwoods, and ornamentals. The preferred host of SLF is a plant, “Tree of Heaven,” that is more commonly found in Pennsylvania and points south, but also in Massachusetts. Alternative hosts include native plants that do not escape its wrath -- American beech, sycamore, birch, black locust, cottonwoods, lilacs, magnolias, maples, oaks, roses and willows.

How can the public help?  MDAR is asking people to report any sightings through their website, including photo evidence if possible. Unfortunately, the Spotted Lanternfly is very easily moved to new locations with people’s unintentional assistance. Egg masses may be laid on any flat surface, and can be moved accidentally on vehicles, outdoor equipment, plants, wood, and even stone, among other items. Adults and immatures are also accidentally moved by people. Early detection and rapid response to SLF in Mass. is key to slowing the spread of SLF.

Anyone who thinks that they have found Spotted Lanternfly in Massachusetts should report it to the Mass. Dept. Agricultural Resources at this website: https://massnrc.org/pests/slfreport.aspx