Two New Videos on “Research that Matters” Released by CAFE 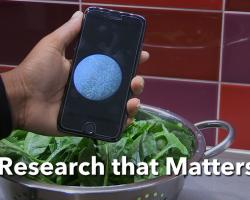 The work of a UMass Amherst food scientist and a University tree fruit extension educator are featured in two new videos released this week by the University’s Center for Agriculture, Food and the Environment (CAFE). CAFE director Jody Jellison says, “We want to let the public know about meaningful research being conducted at UMass that impacts our lives in positive ways. These videos are intended to get the word out.”

Rapid Detection of Harmful Bacteria in Food and Water

Professor Lili He and her colleagues at the UMass Amherst food science department report that they have used funding from the UMass Center for Agriculture, Food and the Environment to develop a new, rapid and low-cost method for detecting bacteria in water or food. Once commercially available, the method will be useful to anyone serving fresh foods, whether home cook, restaurant chef, or aid worker at a natural disaster.

Dr. He, an analytical chemist and expert in detection methods for food contamination, says, “Most people around the world cook their vegetables before eating, but here in the U.S. more and more people like to eat these foods raw. This gave us the idea that a quick test that could be done at home would be a good idea.”

She adds, “Microbial contamination is an important research topic right now. It has been a problem for a long time, but it is now the number one concern for food safety in the U.S.”

For this work, a sensitive and reliable bacteria-detecting chip was designed that can test whether fresh spinach, raw chicken or apple juice, for example, carry a bacterial load. The chip, used with a light microscope for optical detection, relies on what He calls a “capture molecule,” that attracts and binds to any bacteria. A chemical detection method, “surface-enhanced Raman spectroscopy” (SERS), relies on silver nanoparticles. These combined processes are now in the patenting process.

The standard method for culturing bacteria from food samples, known as an aerobic plate count, takes two days, He explains. “There are some others that are faster, but they are not very sensitive or reliable because ingredients in the food can interfere with them. We show in our most recent paper that our method is both sensitive and reliable and it can give you results in less than two hours.” To watch video, click here.

Fruit production specialist Jon Clements of UMass Extension demonstrates more efficient growing methods to produce greater yields and higher-quality fruit from Massachusetts apple orchards. This new technology is the future for the next generation of apple growers in Massachusetts and beyond.

The move to more high-density apple production systems has been the number one change in orchards in the last 25 years. In a high-density orchard, trees are planted closer together, gaining little height, thereby allowing apples to be more exposed to the sun. This method produces more uniform fruit than that used in traditional trees, where a significant quantity of the fruit is covered by foliage. It doesn’t “color up” as well and it takes a lot longer to come into full production. As Clements says, “Apples are what we are trying to grow, not trees.”  High-density orchards have proven to bring greater profitability to the grower and this method makes orchards more sustainable.

Another benefit is that the grower can produce greater yields without additional inputs such as water or pesticides and can decrease labor costs.  A mobile platform can speed up the picking which also makes it safer for the pickers because they are not up on high ladders.

Data on growth and effectiveness of varieties of apples is researched at UMass’s Cold Spring Orchard Research and Education Center in Belchertown and results are shared with growers throughout the Commonwealth and beyond.

UMass Amherst focuses on educational support for fruit growers and other agricultural producers through its Center for Agriculture, Food and the Environment, whose UMass Extension unit is devoted to outreach education and the delivery of new research-based techniques and technologies for practical application.