Biology and Management of Crabgrass 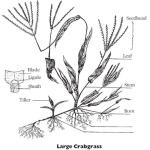 Biology and Management of Crabgrass

Crabgrass is native to Europe or Eurasia and is distributed worldwide. It was introduced into the U.S. in 1849 by the U.S. Patent Office as a potential forage crop. Now, it is found in virtually every crop or non-crop situation.

Large crabgrass, a summer annual, is a member of the grass family. It is one of the most troublesome weeds in lawns. Crabgrass reproduces by seeds and and it has a prolific tillering or branching habit. A single plant is capable of producing 150 to 700 tillers and 150,000 seeds. Crabgrass plants are very adaptable to mowing height. Plants can produce seeds at mowing heights as low as 1/2-inch.

Crabgrass seeds are dormant for a short period of time after they shed from plants. Seed germination is related to soil temperature. When the soil temperature at the surface reaches 55°F for four or five consecutive days, crabgrass begins to germinate. Seeds germinate best from early spring to late summer. Crabgrass continues to grow until midsummer when days become shorter. Vegetative growth slows and plants enter their reproductive stage. Purplish seed heads form until frost kills the plants. Plants that emerge early in the season and have a long period of vegetative growth are much larger and more competitive than plants that germinate late in the season.

Crabgrass is found in almost every turf and landscape situation. It is prolific in lawns, golf courses, athletic fields, gardens, orchards, and waste places. It thrives particularly well in lawn situations.

Once established, crabgrass tolerates both high temperatures and dry weather conditions because of its physiological makeup. Crabgrass species are often very competitive because they are C4 type (warm season) plants. C4 grasses thrive during the hot weather and abundant sunlight of the summer when cool season turfgrasses (C3 plants) are under stress.

Crabgrass is very noticeable in lawns. It is a rapid growing, coarse textured yellowish-green grass that is conspicuous when found growing among fine textured, dark green cool season turfgrasses. The stems are spreading and much branched. Roots develop at nodes on the prostrate stems.

The first leaf is only about twice as long as it is wide. It is tinged light purple and has a white strip running down the center. Both sides have silky, shiny hair. Leaves are 2/5- to 1/2-inch wide and 1/3- to 1-inch long. The leaf sheaths of large crabgrass seedlings are tinged purple and are covered with long stiff hairs. The ligule is large membranous, and toothed. A ligule is a thin membrane or row of hairs at the top of the junction of the leaf sheath and the leaf blade. Auricles are absent. Auricles are the appendages projecting around the stem from both sides of the collar.

Perhaps the most important principle of a crabgrass management program is to prevent re-infestation by seeds. Controlling seed production for several years will help reduce the viable seed supply. Crabgrass cannot be controlled in one growing season because of the great number of viable seeds that can accumulate in the soil from years of infestation. A good weed management program in lawns is one that consists of both focused cultural practices and the use of herbicides as appropriate for the control of any given species. Satisfactory control may require several seasons of conscientious adherence to a good management program.

Crabgrass and many other annual weeds require light for germination and establishment. Therefore, increasing mowing height will decrease in the amount of light reaching the soil surface and can reduce crabgrass. This is particularly important in the spring and early summer during the peak germination period of annual grassy weeds.

as with mowing height, can play a major role in the reduction of light that penetrates the turf canopy and reaches the soil surface. Fertilization programs should supply adequate and balanced nutrition to yield a dense lawn. High levels of fertility should be avoided during the summer months when cool-season turfgrasses are less competitive. If heavy summer weed pressure has thinned the turf, an application of fertilizer in late summer and early fall will support the recovery of the lawn. Fertilization after herbicide applications can aid in filling voids in the turf canopy left by dying weeds.

is another important cultural practice that can play a role in crabgrass management. Crabgrass and many other summer annual weeds are warm-season species. As discussed, warm-season species are capable of withstanding hot and dry summer weather. Turfgrass species that are utilized in New England are cool-season species and, without adequate moisture from rainfall or irrigation, become dormant during the summer. During periods when cool-season turf growth has slowed or ceased as a result of low soil moisture and high temperatures, warm-season annual weeds become very competitive in an otherwise healthy, dense lawn. In the absence of summer rainfall, irrigation can be applied to maintain turf growth and prevent summer dormancy of cool-season lawn grasses. Special attention should be focused on drought prone areas including elevated areas, south and southwest facing slopes and areas adjacent to hardscapes (sidewalks and driveways).

From time to time it may become necessary to reseed or renovate a lawn area. Complete lawn renovation carried out in the spring and early summer without the use of a preemergence herbicide fails more often than not due to the pressure from crabgrass and other annual weeds. Summer annual weed pressure is minimal when turf renovation and establishment is initiated in the late summer and early fall. Warm-season annual weeds that germinate in new seedings at this time of the year seldom reach a size that deters establishment and die with the onset of cold weather. When planning a lawn renovation, choose turfgrass species and cultivars that are best suited for site conditions and turf use. Aggressive cultivars should be considered. Encourage rapid establishment by providing adequate fertility at seeding. Maintain good soil moisture during the germination and early establishment period. Over-seeding can be a valuable tool in restoring sites where turf thinning has resulted from insufficient annual weed control. Openings in the turf as a result of insect damage, disease and excessive wear are prone to weed encroachment. Over-seeding should be used to repair this damage and regain turf density.

sometimes called crabgrass preventers, are applied in early spring. Applications should be completed before Forsythia flowers drop (usually by late April or early May in most areas of Massachusetts). Preemergence herbicides are available to the home gardener at garden retailers, home centers and farm stores. They are most commonly formulated as an herbicide with a lawn fertilizer. Some common herbicide trade names and corresponding herbicides include DimensionTM (dithiopyr), BarricadeTM (prodiamine), HaltsTM (pendimethalin) and TeamTM (benefin+trifluralin). Reseeding and/or renovation cannot be done for three to four months after application of these products. When attempting to control crabgrass in a spring lawn seeding, the herbicide siduron (TupersanTM) can be found formulated with a starter fertilizer. All preemergence herbicide products need to be watered-in with rainfall or irrigation to be activated.

are used after crabgrass has germinated and has become established in a home lawn. There are few good options for the home gardener at this point due to the ineffectiveness and cost of available products. It is suggested that a home gardener should therefore not rely on postemergence products and focus their effort instead on the preemergence strategies outlined above. Postemergence crabgrass products that contain the herbicide quinclorac can be used to spot-treat crabgrass plants that have escaped the preemergence herbicide.

Corn gluten meal is a by-product of the wet-milling of corn in the production of corn starch and corn syrup. Because of its high protein content (about 60% by weight), its historic use has been as an animal feed. Its associated nitrogen concentration of about 9 to 10% N makes it useful as a fertilizer. The carrier of the nitrogen is the proteinaceous fraction of the corn grain; several dipeptides in this fraction comprise the active ingredient that imparts some of its preemergence herbicidal activity by inhibiting root growth at germination.

Research suggests that the herbicidal activity is greater in dry environments than in areas where soil moisture for plant growth is adequate. Product application rates for turf are 10 to 20 lbs per 1000 sq. ft. of corn gluten meal applied twice a year, with one product suggesting two applications of 75 lbs per 1000 sq. ft. The 75 lb per 1000 sq. ft. rate would deliver 13.5 to 15 lbs of nitrogen per 1000 sq. ft. and be a rate that would be considered environmentally irresponsible. Some studies report crabgrass control ranging from 50 to 60% the first year and as much as 90% control after three consecutive years of use. 3 It is often disputed as to whether the control achieved with corn gluten meal is associated with the inhibitory characteristics of the compound or simply the competitive nature of a well-fertilized turf. An experiment conducted at the University of Massachusetts evaluated corn gluten meal applied at two labeled rates and equal amounts of nitrogen from three organic and three synthetic turf fertilizers over a three-year period. Corn gluten meal and each of the six fertilizer treatments provided good control of crabgrass compared to no fertilization treatment in the experiment, suggesting that the efficacy from corn gluten is associated mainly with the nitrogen that it supplies to the turf. Corn gluten products are much more expensive than traditional preemergence herbicides and can be cost prohibitive when large areas are treated. Corn gluten is considered to be organic.