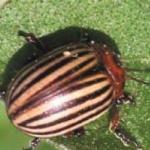 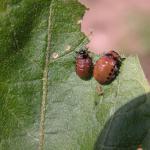 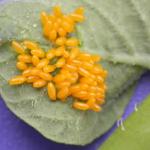 Sometimes called potato bugs, these insect are the bane of potato and eggplant growers. The eggs are orange and are found in clusters on the undersides of leaves. They hatch into tiny larvae which are reddish brown with small black spots. They are soft bodied and are often called soft shells. The larvae grow to about 3/8 inches, then burrow into the soil where they pupate. The adults emerge from the soils and climb back onto the plants. They are rather round in shape, about 3/8 to 1/2 inch long with black and cream stripes running lengthwise on the back. They have a stiff outer skeleton and hence are often referred to as hard shells.

The adults mate and lay eggs on the undersides of leaves for another generation. We typically have three generations in Massachusetts. In the fall, adults leave the plants and crawl to the edges of the field or garden and burrow a few feet into the soil to overwinter. They prefer to do this under tree lines if available. In the spring, they work their way out of the soil and crawl on the ground looking for a suitable host plant where they feed, lay eggs and everything starts over again. The larvae and adults have large appetites and can do considerable damage by feeding on leaves.

Many insecticides have been used against these insect over the years, including some pretty potent mixtures. The beetle population has developed resistance to each new insecticide within a few years of its introduction. The development of resistance can be delayed by not using the same material over and over, but alternating so that the insect does not get a constant diet of the same thing. However, there are other ways to combat Colorado potato beetles besides insecticides. First of all, it is important to realize that although they can defoliate plants, a little leaf feeding is tolerable. On other words, we don=t have to kill them all, so we don=t have to spray, spray, spray.

B.t. insecticides are available that are effective on the small larval stages that are present shortly after hatching. One carefully timed spray of B.t. at this time can reduce the population substantially. B.t.=s are not useful on older larvae or adults, so don=t bother using it when they are not susceptible because beetles do develop resistance to B.t.

Since, most of the beetles overwinter outside of the garden, potatoes can be protected from the first generation by using a floating row cover that is carefully sealed around the edges. You can also dig a ditch about a foot deep around the garden and line it with plastic mulch. As the beetles crawl to the garden, they fall in the ditch and can=t climb back out on the plastic surface. So why don=t they just fly over the ditches into the garden? They are quite weakened from their long winter=s fast and their flight muscles don=t work very well. These methods deal pretty well with the first generation and, unless you are near a potato field, the second generation will be smaller and a bit easier to deal with. If you watch carefully and find them as the eggs are hatching, you can use B.t. on the small larvae of the second generation and greatly reduce their numbers. The third generation is not too bad on potatoes; research has shown that later in the season, potatoes can withstand considerable defoliation with little or no loss in yield.

Eggplants can be planted in early June when there is a good chance that the first generation has gone looking elsewhere. You can also use row covers on eggplant; in fact they love the extra heat (be sure to remove the cover when blossoms appear). You can also dig the ditches.

For the second generation, you can use B.t. as with potatoes. You may need to do so again for the third generation with eggplant.

Tomatoes are susceptible to Colorado potato beetle for a few weeks after transplanting. After that, most varieties grown in this area develop their own chemical, called tomatin, which controls the beetles quite well. You can use row covers or ditches to protect the plants from the first generation.