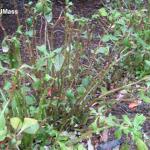 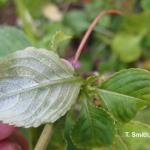 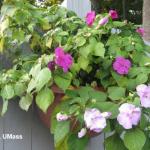 Downy mildew symptoms on Impatiens walleriana typically start with a few leaves that appear slightly yellow or off color (not to be confused with lack of fertilizer), and become completely yellow over time. Leaves may curl downward as if they need to be watered. Under humid conditions, a white, downy-like growth develops on the underside of primarily yellow or curled leaves, but can also be found on the underside of green leaves. Sometimes it is difficult to see the spores without a magnifying glass or hand lens. Eventually the leaves and flowers will drop, resulting in bare stems with only a few tiny, yellow leaves remaining. These stems can become soft and the plant collapses, similar to frost damage.

Which plants get this disease?

This is a disease that affects all Impatiens walleriana plants (garden impatiens, including double impatiens and mini-impatiens, Fusion® and Butterfly® impatiens and I. balsamina (commonly known balsam impatiens). It reportedly also affects some native wild impatiens, I. pallida and I. capensis, known as jewelweeds. Research is currently underway at UMass to determine if this is true. New Guinea impatiens (I. hawkeri) including SunPatiens® and all other bedding plants are not affected.

Impatiens downy mildew is highly influenced by the weather.

Downy mildew requires moisture to create spores and cause new infections. Plants in heavily shaded locations where the leaves stay wet for extended periods of time will generally have a higher incidence and severity of disease because moisture promotes infection and disease development.

Impatiens down mildew tends to be worse in:

Two types of spores are produced that can initiate disease infection:

Impatiens downy mildew can occur in beds with no history of the disease if wind-dispersed spores blow in from other locations.

Can Infected Plants Be Saved?

Once plants are infected they will not recover. Fungicide applications by home gardeners are not recommended since effective fungicides are not available to home gardeners. Fungicide applications are best left for professional landscapers. Fungicides with activity for downy mildew might offer short-term protection for healthy plants only. Fungicides would need to be reapplied throughout the season to keep healthy plants protected and there are no guarantees it will work. Infected plants that are trimmed back will not recover even if a fungicide is used. The disease is inside the plant.

What to Do With Infected Plants

Plants with this disease should be removed, roots, soil and all, bagged and destroyed. Do not compost infected plants or depend on fungicides. If left in the garden, there is a high risk that this disease will overwinter and infect impatiens in future years.

The most reliable information was included that was available at time this information was compiled. Due to constantly changing laws and regulations, UMass Extension can assume no liability for recommendations. The pesticide user is always responsible for the effects of pesticide residues on their own crops, as well as problems caused by drift from their property to other properties or crops. Always read and follow all instructions on the label.