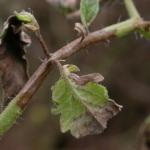 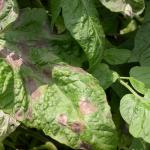 Occasionally, New England growers experience a widespread outbreak in tomatoes and potatoes of late blight, Phytophthora infestans. When this occurs, fall is the time for gardeners to take steps to prevent this disease from surviving the winter, and to prepare for a healthy crop the following year.

Will late blight survive the winter?

The fungus Phytophthora infestans needs live tissue to survive. Potato tubers that are infected with late blight and don’t freeze or decay during the winter can carry the pathogen over the winter to next spring. Tubers can survive in several ways:

Potatoes that freeze or fully decompose will not carry the pathogen overwinter. Tomatoes will not carry late blight over the winter, because freezing kills the whole plant. Tomato seed, even from fruit that was infected with late blight, will not carry the pathogen. Thus you can use your own seed or purchase seed to start next year’s crop without fear of late blight. Certain perennial weeds can become infected with late blight, but none of their aboveground tissues live through the winter. Greenhouses where tomatoes were grown could allow survival only if they never freeze and the crop lives all winter. Late blight will not survive on tomato stakes and cages. In some parts of the world, late blight has two ‘mating types’ (the fungal equivalent of male and female) which can produce long-lasting ‘oospores’ that survive independently. So far, only one mating type has been found in the Northeast so we do not expect oospores to be present.

In mid-summer, when the major concern is preventing spread of late blight on windborne spores, put infected vines in the trash or pile them under a tarp to kill them. In the fall our goal is different. Now, we want to encourage decomposition of the crop residue. This is mainly to reduce other diseases such as early blight and Septoria leaf spot that may overwinter in the residue in or on the soil. Incorporate vines and leaves into the soil by digging or rototilling. The soil environment speeds decay. Composting also works, but try to build a pile with a mix of green and dry inputs so it will heat up (decomposition releases heat!), and turn it at least once to mix and aerate the pile and keep it heating till fully decomposed. If you harvest potatoes, try to do a thorough job – recognizing that it’s nearly impossible to get every last one.

Healthy tomato fruit from infected plants may be used right away or stored till use. Tomato flavor is best preserved above 50 degrees F, though this may also allow late blight and other disease symptoms to develop after harvest. Late blight produces large, greenish brown greasyappearing spots that cover part or all of the fruit. These are firm, not soft. Under the skin, tissue is discolored. For all fruit, wash before using to remove dirt, microbes, or any fungicide residue that might be present. On potato tubers, late blight causes a shallow, granular reddishbrown dry rot that invades the flesh in an irregular fashion. These infections may open the way to bacterial soft rot, which breaks down the whole tuber into a gooey, smelly mess. Other tuber diseases that may be confused with late blight include pink eye and Fusarium dry rot. Black scurf (caused by Rhizoctonia solani) causes small, hard, black, raised structures on the surface – ‘the dirt that won’t wash off’. Not every tuber problem is caused by late blight!

Dig potatoes at least two weeks after vines die down or are killed by mowing. This allows skins to harden. Dig when soil conditions are relatively dry, and avoid bruises and cuts as much as possible, as they allow entry of pathogens and increase moisture loss. A curing period when tubers are held in darkness at 50--60 degrees F and RH 95%, with good air circulation for 10-20 days will cause wounds to heal and will help prolong good quality in storage. Potatoes with late blight, soft rot, or Pythium leak may break down under these curing conditions and these should be graded out. Then, cool tubers to a storage temperature of around 40-45 degrees F (and 95 % RH if possible). Avoid exposure to light, which causes greening and makes tubers unsafe to eat. During fall and winter, dispose of any diseased potatoes tubers by feeding to livestock, placing in an active, heating compost pile, spreading sparingly on the soil surface where they will freeze, burying deeply in the soil (too deep to sprout in spring), or placing in the trash.

It’s common for home gardeners to cut out the diseased section of a potato or tomato, and eat the healthy part. This is as safe to do with late blight as with other common diseases such as anthracnose or early blight. Late blight is a plant pathogen, not a pathogen of people or animals. It does not produce any toxins in infected tissue. For home canning or storage, select only healthy fruit and tubers.

What to Do Next Spring

Select disease-resistant varieties for at least some of your crop, and buy diseasefree seed. ‘Mountain Magic’, ‘Plum Regal’, and ‘Legend’ are three varieties with resistance or tolerance to late blight. Growing your own transplants or purchasing from a reputable grower will ensure a healthy start to the season. Inspect all transplants for stem, petiole cankers or leaf blight before planting.

If you had late blight symptoms in your garden, do not save tubers as seed to be planted next spring. Purchase certified disease-free potato seed from a reputable source, and ask your supplier about their source of seed and if it was inspected in the field for late blight. In the spring (April – June), inspect last year’s potato plot and any compost or cull piles for volunteer potato plants that might come up. If you find potato plants, pull them out and put them in the trash or destroy them. If tubers were infected and survive, then the late blight could grow upward from the tuber, infecting the stem and producing spores when weather conditions are favorable. These spores could then disperse to other tomato and potato plants.

For both crops, provide good soil fertility, water drainage, air circulation, and use cultural practices to provide what the crop needs for healthy growth.

During the growing season, pay attention to weather conditions and pest alerts to learn about whether late blight has been observed in New England, and what actions you need to take to protect your crop.