A goal of all turf managers and homeowners should be to conserve irrigation water. This can be achieved by maximizing our inputs (precipitation, irrigation) while minimizing potential outputs (evaporation, transpiration, and leaching or runoff). More specifically, any time irrigation water is applied to turfgrass the following water conservation guidelines should be followed.

Maximize the Amount of Water Entering the Turfgrass Rootzone (Storage) By:

Apply water only as fast as it can enter the soil surface to avoid surface runoff and puddling which reduces irrigation efficiency by reducing the amount of water that is available to recharge the root zone. Apply only as much water as needed to refill the root zone (that can be reasonably stored in the root zone to avoid leaching. Control conditions that reduce soil infiltration rates such as soil compaction, thatch, and hydrophobic soils. 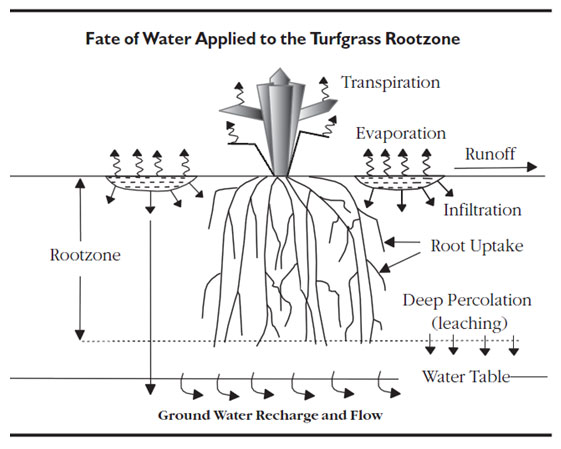 The primary cause of ponding and surface water runoff is applying irrigation water at rates that exceed the soil infiltration rate (the soil's ability to absorb water). Infiltration rates vary with the type of soil.

On such soils and under conditions associated with low infiltration (heavy thatch, compaction), the recommended amount of water should be applied using several short cycles or multiple irrigation events (referred to as multiple cycling), rather than applying all the water in one event. The amount of time that the irrigation system is "on" actively delivering water (until ponding occurs) is at least as long as the system is "off" to allow for infiltration. Alternative strategies are to use slower application rates or low volume irrigation nozzles. For hard-to wet soils such as heavy clays another approach is to maintain higher soil moisture levels rather than cycling from field capacity to wilt which will reduce the amount of water that needs to be applied. Irrigation should be scheduled when wind conditions are minimal in order to achieve a more uniform application. Check the uniformity of your irrigation system by placing several open top containers of the same size (tuna or cat food cans work well) under the system in a grid-like pattern. Collect and measure (in inches) the water and determine the average. The appropriate amount has been applied when the rootzone has been fully recharged. Applying one inch of water (might take 2 to 3 hours) will wet most soils down to a depth of 6 to 8 inches. Furthermore, irrigation applications should be scheduled under conditions of low evaporative demand to minimize evaporative water loss. These conditions are most likely to occur during pre-dawn hours. Avoid watering just prior to or following "dew formation" (late afternoon, 4 to 8 p.m. or late moming, 10 a.m. to noon, respectively). Watering at these times favors prolonged leaf wetness which encourages disease activity.

Select cultivars (and species) that have superior drought avoidance characteristics such as low water use rates and deep rooting potential. Use caution when selecting cultivars evaluated for drought survival outside your region because of geographical differences in evaporative demand and soil related stresses that can affect rooting and evapotranspiration (ET). Unfortunately, the comparative drought survival of new and recently released cultivars is limited.

There is little that can be done to prevent the inherent limitation of summer root growth decline in cool-season turfgrass other than to minimize potential stresses that may contribute to a more rapid decline that limits the full genetic rooting potential of a species or cultivar. Examples of root stresses include:

Apply herbicides intelligently - preemergence herbicides are more generally toxic to roots than to shoots. Hence, turfgrass shoots may be unaffected while root activity is severely reduced. An herbicide should be applied only as needed and according to label directions. Spot treat for broadleaf weeds when possible to limit stress and avoid blanket applications, especially when air temperatures exceed 85 °F.

Thatch - manage thatch to keep levels below 1/2 inch in order to promote deeper rooting into the soil and to limit rooting that is confined to the poor nutrient and water holding environment of the thatch.

Under prolonged periods (2 to 4 weeks) of little or no water, grasses will cease to grow and shoots and roots will die, resulting in a straw colored turf. However, perennial parts of the plant including crown tissues (located near or at the soil surface) and nodes located on lateral stems (rhizomes and stolons) are still active and capable of regenerating new shoots and roots at the first significant rainfall. Recovery and green-up from normal summer dormancy with rain and cooler weather may take 2 weeks before 100 % green-up is obtained. In extended periods of dormancy (45 to 60 days) with little or no rainfall, only 70% recovery may be possible. If a high quality and functional turf is the goal, drought-induced dormancy can be avoided by timely watering and proper management as previously outlined. Other strategies that should be considered with dormant turf are:

Irrigation - if irrigation cannot be applied properly and on a timely basis, allow the turf to enter dormancy (buds associated with crowns and lateral stems are extremely drought hardy). Unirrigated turf in a dormant state produces a healthy turf in a short time after drought ceases. Inadequate watering during drought induced dormancy accelerates depletion of carbohydrate reserves which reduces drought-recovery potential.

Pest problems - regularly inspect for disease (summer patch) and insects (chinch bugs) which may go undetected when the turf is dormant and not actively growing. Increased growth of weeds may compete for limited soil moisture. Reduce herbicide usage (spot treat for weeds) during dormant periods.

Renovations - consider renovations in the fall if drought-recovery is poor or thatch levels are excessive (> 1.0 inch).