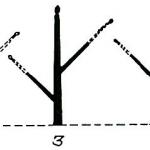 Pruning fruit trees is usually perceived as a very difficult task for the inexperienced. This is due primarily to the uncertainty involved in deciding what to prune, where to cut, and how much wood to remove. Pruning decisions can be made much easier if we know the way a tree grows naturally. The purpose of this article is to present some basic principles and observations on shoot growth. While these rules were developed with tree fruit in mind, they are generally applicable to deciduous trees in the landscape.

Understanding the rules of shoot growth and the responses to pruning, can be very useful, and help make anyone a better pruner and horticulturist.